The National Indian Education Association will be returning to Alaska for their 45th Annual Convention and Tradeshow. The four-day Convention will take place at the Dena’ina Civic and Convention Center in downtown Anchorage from 15-18 October 2014.

NIEA President Pamela Agoyo noted that, “Being home to 229 federally recognized tribes, Alaska is rich in Native history and educational leadership at the tribal level, which makes it the ideal location to host our 2014 annual conference.”

Native education stakeholders incorporated NIEA in 1970. The membership-driven organization has since been dedicated to the mission of advancing quality education for all American Indian, Alaska Native, and Native Hawaiian peoples. The Association’s 2,500 members work each day to strengthen Native educational opportunities while also preserving the unique cultures and languages of Native Americans.

For more information about NIEA 2014 or to inquire about attending the convention as a member, sponsor, or tradeshow exhibitor, please visit their website at www.niea.org

Colleges are introducing new programs targeting prospective Native American students, hoping to show that higher education and their cultural identities can complement each other. 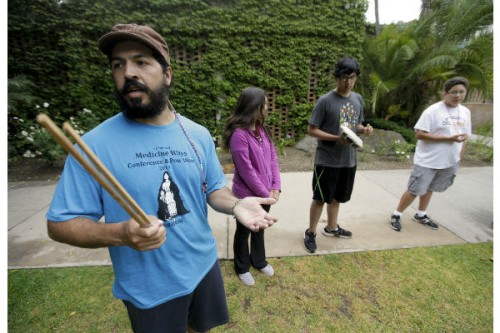 Few Native Americans go to college and most of those who do never graduate. To improve those statistics, more colleges are offering camps where teens from different tribes are exposed to college life. In this image, Native American, Brandon Duran plays during a drum circle before workshop sessions at University of California, Riverside on Thursday, June 26.
Photo/ Chris Carlson, AP

Elijah Watson knows he wants to go to college. He also knows that it will be difficult to leave home on the Navajo reservation if he does.

The 17-year-old was reminded of the tough decision he’ll face next year when he participated in a weeklong celebration in March of his cousin’s Kinaalda, a hallowed Navajo ceremony marking a girl’s transition into womanhood.

“I’m afraid because it’s really hard to leave my family,” he said, noting that college would mean he’d be away from taking part in the same rite for his little sister and participating in other important tribal ceremonies.

To reach students like Watson with higher education aspirations, a growing number of universities are offering programs to recruit and prepare Native American students for a transition to college life that can bring on a wrenching emotional conflict as they straddle two worlds.

Many young Native Americans find themselves divided by their desire for a higher education and the drive to stay close to home to hold onto a critical part of their identity. Sometimes, families discourage children from pursuing college, fearing once they leave the reservation they won’t come back.

That was the case with Watson’s mother — his grandmother encouraged her to stay home and carry on the family tradition of pottery-making.

“These students could be in a classroom with hundreds of kids and no one will be like them so it’s really good for these programs to pull all of these kids together,” said Ahniwake Rose, the director of the National Indian Education Association.

“Moving to college for these kids is taking them so far away from their homes. On top of that, we still have so many first generation students and their parents can’t give them any idea of what college is like,” Ms. Rose said.

The programs challenge the idea that tribal customs and higher education don’t mix, said Joshua Gonzalez, the director of Native American Student Programs at the university 60 miles east of Los Angeles and hundreds of miles from Watson’s home on the Navajo Nation.

Throughout their week at Riverside, students got a taste of the college experience by attending classroom lectures, eating in the cafeteria and sleeping in the dorms. The 30 students also participated in cultural activities like prayer circles and beading workshops.

“We encourage having your culture and traditions as well as academics,” said Mr. Gonzalez, whose program has a roughly 90 percent success rate in getting Native Americans to go to college.

“To be able to know your language, to be able to sing the songs, to know the creation stories — those are things that are really important,” he said.

Upon completion of Riverside’s program, students are given access to the university’s resources and staff to assist with the application process.

Pamela Agoyo, the director of American Indian Student Services at the University of New Mexico, said many programs are introducing kids to the idea of college as early as middle school to give them the time to embrace the possibility and plan for it.

“Institutions are realizing that you don’t start planning for college your freshman year of college,” Ms. Agoyo said, noting that students need to plan and prepare for their experience beforehand.

Rose said the boot camps are critical to college success because they help identify peers and mentors who can guide students through rough patches.

Few go on to college and when they do, most drop out.

Jordan Thomas, a member of the Lummi Tribe, attended Riverside’s program and will be a freshman there this fall. She was born on a reservation in Washington state and at age 2 moved with her family to Southern California because there were more educational opportunities.

Lummi cultural traditions are important to her family — she once missed eight weeks of middle school to attend her grandfather’s burial ceremony — and the Riverside program gave her confidence that she can attend school and not lose her Native American identity.

“I learned that it’s all about balance,” she said. “This program has truly helped me.”