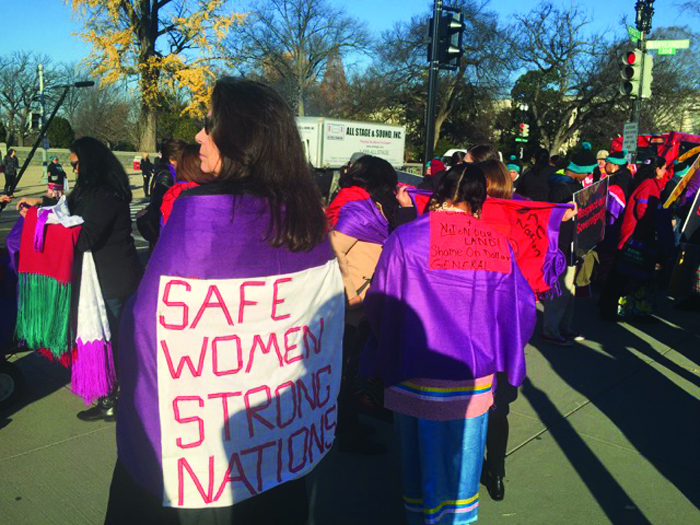 The Quilt Walk for Justice was an effort to bring attention to the Dollar General V. Mississippi Band of Choctaw Indians Supreme Court Hearing. The case has the potential to strip tribes of their inherent sovereignty.
Photo/Bonnie Juneau

If you sign a contract with someone, the base understanding is that you have agreed and will abide by the terms of the contract. Seems fairly straightforward and it’s one of the ways that Tulalip reaffirms our sovereignty, by insisting that those who want to do business on our Reservation understand and agree that any legal issues will be heard in the Tulalip Court system. Dollar General, after signing a similar agreement to do business with the Mississippi Band of Choctaw Indians, is now arguing that a civil suit brought forward for alleged abuse of a minor, shouldn’t be subject to tribal court jurisdiction. On December 7th, Tulalip Board of Director Bonnie Juneau and Tulalip Youth Council Co-Vice Chairwoman Jlynn Joseph joined Indigenous people from across the nation in protest. 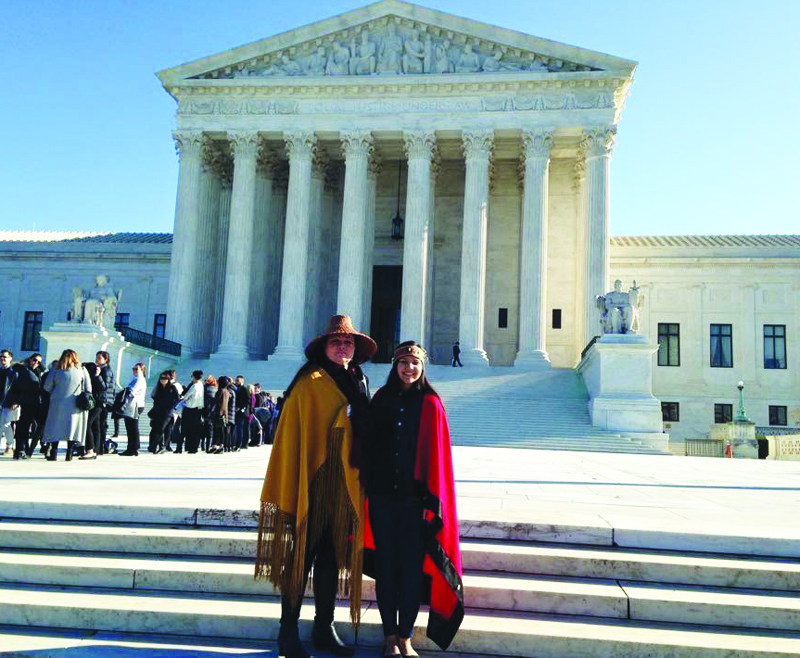 Tulalip Board of Director Bonnie Juneau and Tulalip Youth Council Co-vice Chair JLynn Joseph joined demonstrators for the Quilt Walk for Justice, the quilt squares each included a message from survivors of sexual assault to illustrate the real trauma that results from patchwork jurisdiction on tribal lands.
Photo/Bonnie Juneau 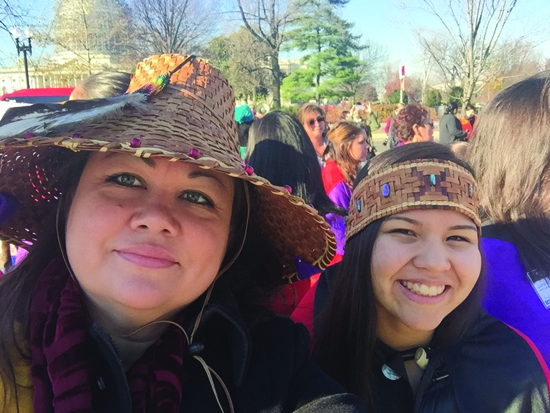 “It’s important for our youth know happens when we travel to D.C.,” said Bonnie, “I want our future leaders to know what kinds of work we do while we’re here and why tribes have to be involved in national politics. Cases like this are why we support candidates that aren’t local, this is why we give campaign contributions, because national politics affect us at home.”
Photo/Bonnie Juneau

“Choctaw is similar to us, Tulalip,” said Bonnie. “They have the ability enter consensual agreements, contracts, with businesses. We’ve done this with Wal-Mart, Home Depot, and all the businesses in Quil Ceda Village. In that contract the business agreed to submit to the civil jurisdiction of our courts.”

The case is deeply concerning for several reasons, explained Bonnie.

“These businesses only want tribal jurisdiction and sovereignty when it benefits their bottom line,” she said. “They want the benefits of our lands and rights without honoring the laws of our land. Their big claim is that they feel the United States isn’t protecting their civil rights in tribal courts. If a U.S. citizen travels to Canada or Mexico, it’s understood that they agree to abide by the laws of those lands. If they don’t, does the Federal Government get involved in those cases? This isn’t a case of someone driving onto the reservation and not knowing they were there. Dollar General knowingly contracted with the Tribe, they knowingly agreed to tribal court jurisdiction. 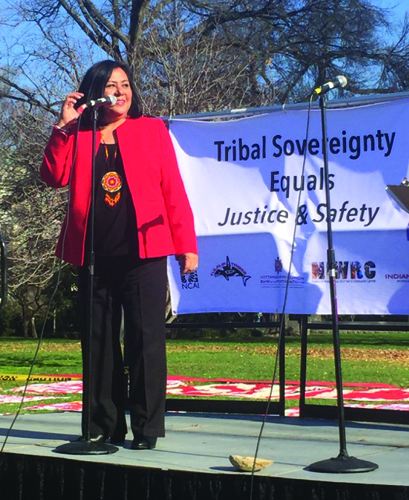 Phylis Anderson Principal Chief of the Mississippi Choctaw was one of numerous speakers fighting for both victims’ rights and tribal sovereignty.
Photo/Bonnie Juneau

“Here at Tulalip, many of our judges have been non-Native and many of our juries include Native American and non-Native jurors, there have even been cases of some of our juries being completely non-native residents or employees of the Tribe. They’re questioning the credibility of our courts. I hope the United States understands that they need to honor the treaties that they made. Those treaties aren’t outdated any more than the Constitution of the United States is outdated.”

Tribal justice systems are sophisticated and include safeguards to ensure due process, Bonnie continued. Tribal jurisdiction, both civil and sometimes criminal, over non-Natives living or doing business on the reservation is vital because Federal law and justice systems are not set up to deal with local cases.

“It’s well known that the Federal court only takes the big cases. Our cases just aren’t big enough for them. Perpetrators have gotten away with crimes in the past, it’s one of the gaps that makes Quil Walkreservations a haven for criminals. It’s one of the reasons that the Violence Against Women Act’s (VAWA) tribal provisions were so important. It also shows us that it’s time to take VAWA one step further to include the protection of minors. The Federal Government cannot give non-Native criminals a free pass to commit crimes against Native Americans on Reservation. By not recognizing the authority of tribal courts that’s, in essence, what they’d be doing.

“This is also about workplace safety,” Bonnie continued. “SEIU (Service Employees International Union) has signed on and even gave their employees in D.C. the day off so that they could participate in the march (December 7th Quilt Walk for Justice). Beyond the jurisdictional issue, this family entrusted their child to this person as a mentor, that’s an immense amount of responsibility. Shame on you Dollar General, justice should be applied equally without prejudice, no matter the age, sex or race of the victim or the perpetrator. This case represents a threat to every Native woman, man and child victimized by a non-Indian.” 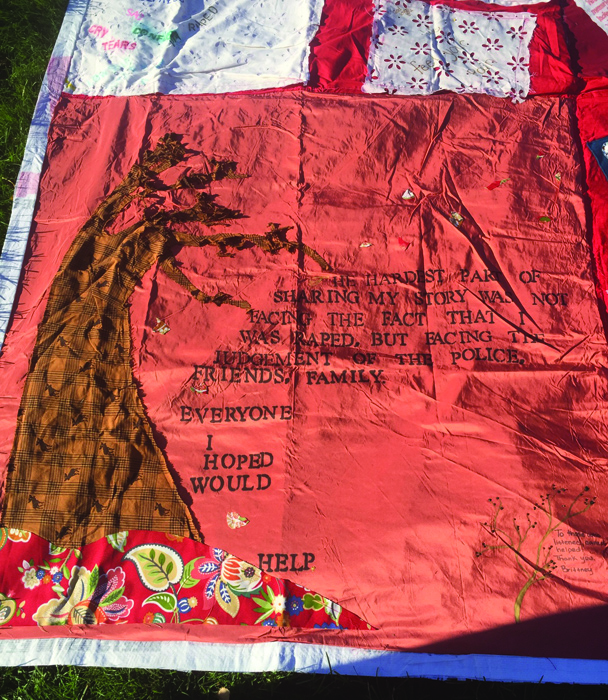 A square from the quilt that reads: “The hardest part of sharing my story was not facing the fact that I was raped, but facing the judgment of the police, my friends, family. Everyone I hoped would help.”
Photo/Bonnie Juneau 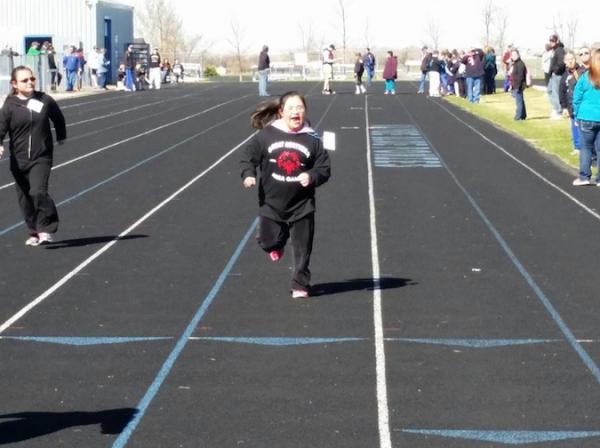 Albuquerque, N.M.: Tiller’s Guide to Indian Country is now reaching out to the tribes for information to build tribal prosperity, and your help is needed.

Tiller’s Guide is preserving tribal legacies and building tribal business relationships. Since 1996, Tiller’s Guide has been an indispensable outreach for Native America, bringing business, government support and tourism. A massive reference source and the go-to place for tribal information for agencies, companies and media, Tiller’s Guide tells the story of Indian economic progress, tracking Indian success stories and partnering with the tribes to reach out into the world.

Tiller’s Guide is compiled by a team led by Native scholar, author and editor Dr. Veronica Tiller to gather accurate information about the tribes, and her researchers are now contacting tribal offices to ensure that we get the most accurate information out into the world. Partnering with the Guide means that a tribe has a stake in determining how they are viewed by the outside world.

W. Ron Allen, Chairman/CEO, Jamestown S’Klallam of Washington State, writes: “I strongly encourage Tribal leadership and staff to help Dr. Tiller’s Guide to Indian Country continue to provide the rich and valuable information, histories and profile data of the tribes across the nation. This guide will also provide current economic growth and diversification, as well as their land status, government, infrastructure and tourism.  If you promptly respond to her team’s request for information, you’ll support her dedication and commitment to produce this valuable resource. Veronica Tiller has methodically and patiently gathered together this information into a single, thorough guide.  That’s what makes Tiller’s Guide indispensable.  Your response to her team’s requests shall make this happen as an impressive success. I urge all to whom Veronica’s team reaches out to partner with her in this effort.”

When Dr. Tiller’s team calls you, please help on a timely basis so the Guide can reach those who seek to work with our communities. Call (505) 328-9772 for more information.