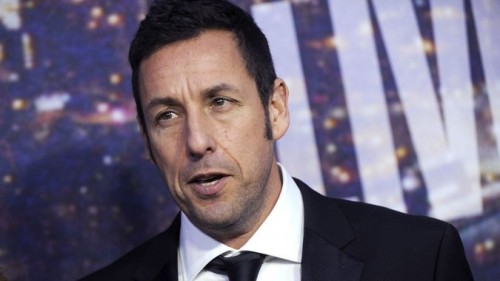 “If you’re overly sensitive about it…then you should probably leave,” a producer is heard telling a group of Native American actors.

A video has surfaced from the set Adam Sandler’s new film, The Ridiculous Six, in which a producer tells many offended Native American actors to leave if they’re “overly sensitive.” The released cell phone video — from Native American actor Goldie Tom, obtained by the Indian Country Today Media Network — shows a heated discussion before dozens of Native Americans walked off set after feeling misrepresented.

“There’s a stereotype going on,” one of the actors says. A producer responds, “Here’s the thing: If you’re overly sensitive about it, then you should probably leave. That’s the most important thing, we don’t want to offend anyone.”

The actors try to explain why the characters’ names — specifically Beaver’s Breath and No Bra — are offensive. “We don’t need to sell our people out,” another actor says. “I understand completely, but we’re not going to change Beaver’s Breath. That’s in the movie,” the producer responds.

The crew also try to tell the actors that “Adam’s making fun of himself” more than he’s making fun of Native Americans. “Does he make fun of the Jews?” one of the actors asks to no response. “I really think you guys are the good guys,” another crew member says.

“We want to know why our advisor is leaving because he felt disrespected,” an actor says, noting the movie’s cultural advisor, Bruce, wasn’t able to talk with Sandler when he wanted to. A specific wedding scene in which a teepee wasn’t accurately decorated, which one of the female actors said was “insensitive” and “insulting,” is what allegedly hurt the cultural advisor.

Native American actor Loren Anthony, who walked off the set of The Ridiculous Six, told the Indian Country Today Media Network last week he was reluctant to take the part in the first place. “I was asked a long time ago to do some work on this and I wasn’t down for it. Then they told me it was going to be a comedy, but it would not be racist. So I agreed to it but on Monday things started getting weird on the set,” he told the website.

When news broke on April 23 that many Native Americans had walked off the set, Netflix issued the following statement: “The movie has ridiculous in the title for a reason: because it is ridiculous. It is a broad satire of Western movies and the stereotypes they popularized, featuring a diverse cast that is not only part of — but in on — the joke.”

Netflix did not immediately respond to BuzzFeed News’ request for comment about the new details that have emerged from the video. BuzzFeed News has also reached out to Anthony and Tom for comment, but has not yet heard back.

Shooting for Avatar 2, the sequel to James Cameron’s world wide box office smash, begins in 2015, and new casting call information reveals the inclusion of Native Americans in supporting roles. Filming will be split between Manhattan Beach, California, and a location in New Zealand.

The film is currently set for a December 2016 premiere in the United States.

A direct sequel to the first film Avatar 2 it’s believed the plot will follow Jake Sully (Sam Worthington) who uses the technology to transfer his consciousness in to the body of his Na’vi, so he can live a fresh life with princess Neytiri (Zoe Saldana). Something tells us this won’t go smoothly however.

Also reprising their roles are Sigourney Weaver as “Dr. Grace Augustine”, Stephen Lang as “Colonel Miles Quaritch,” and Joely Richardson is rumored to be newly joining the cast.

Although the status of the idea is unknown, James Cameron has stated that he wants to film Avatar 2 at a higher frame rate that usually used, and possibly as high as 60fps, something usually reserved for video games. Since most theaters don’t run at this rate it may only be reserved for special circumstances or the future when higher frame rates might become the standard.

Cameron has also expressed interest in filming some scenes at the deepest location on earth accessible by humans, the bottom of the Mariana Trench in the Pacific Ocean. Though again the status of this is not clear.

Cameron who wrote, will direct and produce the film has his work cut out over the next few years as he’s agreed to two more Avatar movies, Avatar 3 and Avatar 4. Judging from the fact that the first Avatar was one of the highest grossing films of all time, continuing the franchise makes sense.