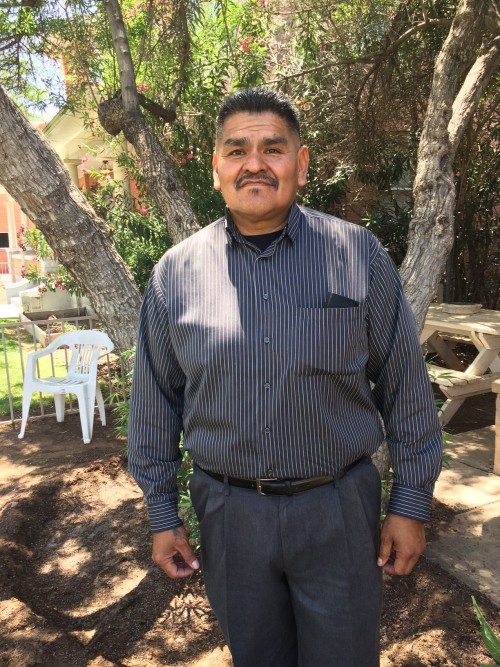 (Laurel Morales)
Ken Lewis stands in front of Indian Rehab in Phoenix. He says he has been clean for eight years thanks to the people here and the traditional methods they offer.

Native Americans have some of the highest substance abuse rates compared to other racial or ethnic groups. Alcohol and meth are the drugs of choice, but many tribal police have been overwhelmed by a new crop of heroin. Black tar heroin is cheap, addictive and destructive.

A decade ago, Ken Lewis almost lost his arm to an IV drug addiction. Twice he developed cysts in his veins that exploded in the hospital. When he came out of surgery the doctor prescribed pain killers. So he traded his meth and heroin for the prescribed opiates.

“I was at my wit’s end,” Lewis said. “I mean I was mentally gone, dead. Spiritually, I didn’t believe in a god. Emotionally, didn’t feel, didn’t realize I was hurting people or hurting myself. Physically, I probably should’ve been dead.”

A judge finally ordered Lewis to rehab. He went to Native American Connections. Indian Rehab, as it’s called, is an old two-story house in the middle of downtown Phoenix.

“The lady behind the desk came out and she gave me this big old hug,” Lewis recalled. “And inside I’m cussing her out. And she told me, ‘it’s going to be ok.’ And I was more mad because nobody told me that in a long time. I hadn’t heard those words. People gave up on me.”

The recovery program combines western practices like the 12 steps with traditional indigenous healing ceremonies. Lewis, an Akimel O’odham member, said the God talk wasn’t working. It was the sweat lodge that gave him the hope he so desperately needed.

“This is the type of forgiveness of self, of cleansing, of a rebirth,” Lewis said. “And so when you’re coming out you’re feeling purified. You’re feeling worthy and that I can go into recovery. And so you’ve cleansed all those negative feelings and thoughts and decisions you made.”

Lewis has been clean for eight years and now works for Native American Connections. Many aren’t so lucky. A person addicted to heroin often winds up in jail or dead.

At the Coconino County Jail on the edge of the Navajo Nation, half of the inmates are Native American. So the sheriff invited Shannon Rivers to conduct sweat lodge ceremonies. Inside the razor-wire fence, Rivers recently built a fire next to a rebar structure. When the fire has heated a dozen or so stones he covered the frame with blankets. He then poured water over the hot rocks inside the sweat lodge. 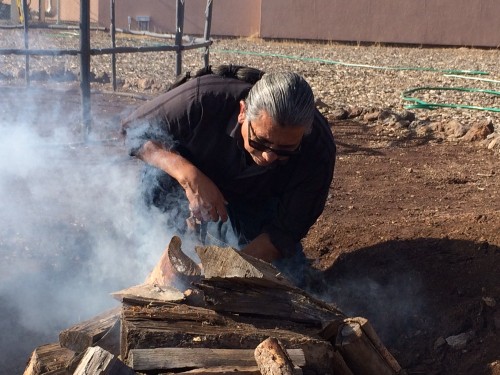 (Laurel Morales)
Shannon Rivers, an Akimel O’odham member, leads purification ceremonies at the Coconino County jail, where half of the inmates are Native American.

“My job here is to help these men down a path of sobriety,” Rivers said. “And how we do that is through these ceremonies. Because what we know is a lot of the ways the western ways aren’t working.”

Rivers, himself a former addict, said the reasons why Native Americans have such high rates of incarceration and substance abuse are complex.

“For me, I still had that baggage that I grew up with as a Native person coming from a reservation,” Rivers said. “So I struggled with my shortcomings, my insecurities, my anger, my jealousy. That baggage is tied to our history as Native people.” 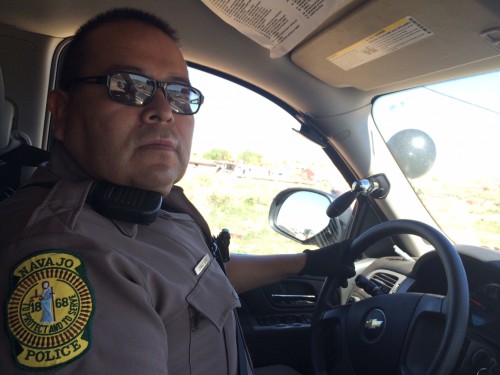 A history of government-run boarding schools, destruction of language and forced relocation.

And there’s a new problem: a recent FBI report shows the Mexican drug cartels are specifically targeting Indian Country. High unemployment on the reservations means many turn to trafficking and dealing. The cartels know the tribes lack law enforcement resources.

On the Navajo Nation, about 200 full-time officers patrol a reservation the size of West Virginia. On a ride along Navajo Nation officer Donald Seimy said a recent false report of a car accident pulled all four officers on duty to one remote location. Seimy’s theory: the calls came from drug dealers trying to sell or traffic drugs across the reservation.

“And we show up and then there’s nothing,” Seimy said. “I think they have that knowledge of us not being everywhere or the short manpower that we have they know it. So they’re getting smart about it.”

The Navajo Nation and many other tribes just don’t have the law enforcement to keep the drugs out. That means more and more Native Americans are getting hooked.