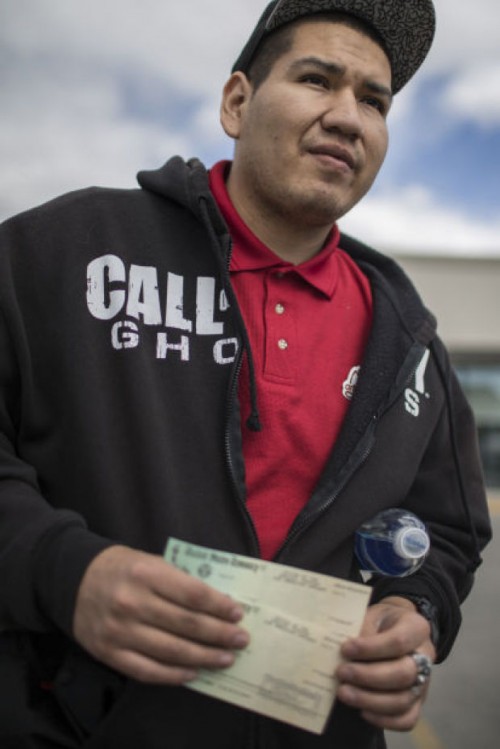 James C’Hair shows settlement checks from the Office of the Special Trustee for American Indians received by him and his wife Wednesday outside Atlantic City Federal Credit Union in Riverton.
Ryan Dorgan | Star-Tribune

LANDER, Wyo. (AP) – The first installment in a $157 million federal settlement began to pour into the Wind River Indian Reservation this week, as members of the Northern Arapaho Tribe started receiving $6,300 checks in the mail.

The impact of the cash infusion was almost immediately evident on the reservation and in surrounding communities, where many tribal members went to deposit their checks.

Riverton and Lander, both straddling the reservation border, were bustling. Banks saw long lines. Car dealerships and auto parts stores reported brisk business. And law enforcement in both communities was highly visible, posting cruisers at banks in what authorities said was an effort to protect tribal members cashing checks from would-be assailants.

Many tribal members welcomed the injection of money into a reservation long beset by poverty. Unemployment there is almost double the state average, while average family income lags far behind state and national standards.

But they also expressed trepidation that the money could lead to an increase in crime, and they worried that many tribal members might squander the once-in-a-lifetime payday.

“People need to be smart and budget their money,’’ said Randee Iron Cloud, of Ethete, who was with her husband, Norman, at the Atlantic City Federal Credit Union in Lander. “They need to think about the needs of the kids above all else.’’

The couple said they planned to use the money to pay down debt on their car and to take their five children on a trip to Albuquerque.

The settlement stems from a 1970s lawsuit brought by the Northern Arapaho and Eastern Shoshone tribes against the federal government for its failure to properly collect mineral royalties from oil and gas development on tribal lands.

The total settlement is worth $157 million and will be split evenly between Northern Arapaho and Eastern Shoshone tribal members.

Of the total, $10 million will be used to repair environmental degradation resulting from oil and gas operations.

Federal law requires that 85 percent of Native American mineral royalties be paid to individual tribal members, with the remaining 15 percent going to the tribes themselves.

Overton Sankey, who works at a local Head Start, said most tribal members have long prepared to receive their checks and made plans to save the money or use it for bigger purchases like cars.

While Sankey is not a tribal member, his wife is, and she received a check. The couple intend to use the money for home repairs, but not before going on a trip.

“We haven’t had a vacation in years,’’ Sankey said while playing the slots at the Wind River Casino. “We’re going to work on the house when we get back.’’

Businesses were bustling in Lander and Riverton. A parade of cars for sale lined U.S. Highway 287 approaching the Atlantic City Federal Credit Union in Lander. Inside the bank, Vice President of Member Services Kyleen West said the credit union had seen a steady stream of customers.

The bank was cashing checks from members and nonmembers alike. It would continue to do so until it ran out of money. A first pot of cash set aside to accommodate the settlements would likely be exhausted, West said, noting that a second installment was also due to arrive to meet the second round of checks.

As of midday Wednesday, all was going smoothly, she said. Local banks worked with the tribes in advance to encourage members to create bank accounts where they could deposit money. The bank has seen a rise in the number of new accounts as a result, she said.

“I have been very pleased with the way the tribes have worked with the banking industry, local law enforcement and the community,’’ West said.

In Riverton, Bobbi Higgs, manager of an O’Reilly Auto Parts, said the store was busier Wednesday than it is on strong Saturdays. Six cars for sale were stationed in the parking lot outside, an oddity in its own right, she said. Many of the new car owners then came into the store to buy parts, Higgs added.

“Everyone is selling what they can,’’ she said. In the adjacent Ace Hardware parking lot, a relatively new 35-foot camper sold quickly Wednesday morning, she said.

Law enforcement was ubiquitous in both communities. Police cars were parked outside banks, and officers stood by the doors.

Police officers from around the state were called in to help. Cruisers from Cody, Jackson and Green River were stationed in front of banks in Lander, while a trailer bearing the name of the Sweetwater County bomb squad helped form a temporary command center outside Atlantic City Federal Credit Union.

Lander Police Chief Jim Carey said the settlement had been well publicized, and authorities worried about outsiders who might potentially prey on tribal members cashing their checks.

“We want to send a message that anyone who wants to do violence to our citizens won’t be allowed to,’’ Carey said. “Our mission today is to prevent violent crime and make sure they can get their checks in a safe manner.’’
Information from: Casper (Wyo.) Star-Tribune, http://www.trib.com