NEW YORK DAILY NEWS | Tuesday, May 13, 2014, 5:05 PM
The University of North Dakota does not organize the Springfest bash for which the shirts were made, so it’s unclear whether the school will take disciplinary action against the students for the questionable apparel.

A group of college students made T-shirts showing a Native American head drinking from a beer bong that read “Siouxper drunk” for a huge party before finals week.

The University of North Dakota does not organize the Springfest bash, scheduled for Saturday, so it’s unclear whether the school will — or can — take disciplinary action against the students for the questionable apparel.

What is clear is that this is far from the first time people came to a head over the representation of Native Americans on the campus.

“There’s a really long history of fighting over the logo and nickname for the university. These T-shirts are just the latest event that connected to that,” Sebastian Braun, chair of the school’s American Indian Studies Department, told the Daily News.

Several years ago, the NCAA pressured the university to drop its “Fighting Sioux” logo and name, which were deemed offensive. 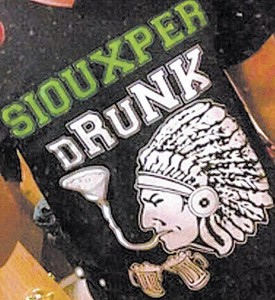 This T-shirt designed for a big, unsanctioned party near the University of North Dakota is being criticized for the use of an American Indian image. Photo: Twitter

“The message on the shirts demonstrated an unacceptable lack of sensitivity and a complete lack of respect for American Indians and all members of the community,” he said.

Just last week the Gamma Phi Beta sorority displayed a banner that read, “You can take away our mascot but you can’t take away our pride. Mens 2014 NCAA Frozen Four.” It was quickly removed, the president said in a statement.

Last month, students put up a poster on campus criticizing the old logo and presumably people who are nostalgic for it. 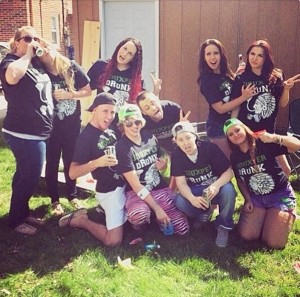 Braun said the upcoming party will be held off-campus but nearby.

“Part of it is in a city park and there’s a business in town with a liquor license. It’s a neighborhood with a lot of student residences,” he said.

Students who are upset about the T-shirts on Friday organized a walk from the American Indian Student Services building to the administrative building.

University spokesman Peter Johnson said the situation was under investigation. 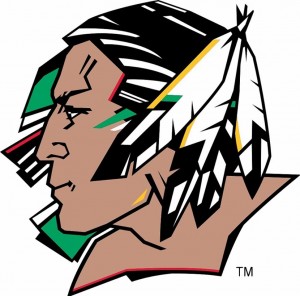 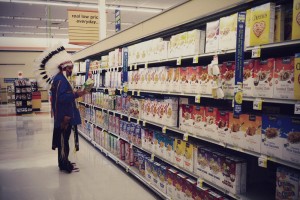 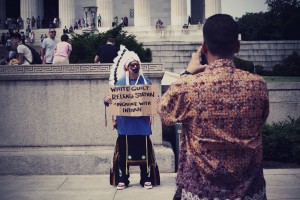 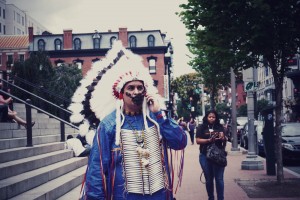