War history and the American South often lead to thoughts of gray and blue uniforms and the brother versus brother imagery of the Civil War. 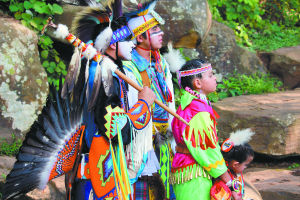 Native Americans representing a variety of tribes will provide educational insight into their participation in the War of 1812 during a three-day event at Natchez Trace Parkway. Photo: Times Daily

But war in the South was more than just Confederates fighting Union forces. The British Empire also fought United States forces in the South in the War of 1812. Those skirmishes often involved Native American tribes.

Susanne Hamlin, executive director of Colbert County Tourism, said the role of Native Americans in the War of 1812 will be commemorated Thursday through Saturday at Colbert Ferry Park on the Natchez Trace Parkway, north of Cherokee.

The Trace was one of the key supply lines during fighting in the South.

“We’re really excited about it,” Hamlin said. “It’s the bicentennial of the Natchez Trace Parkway, which started last year.”

Hamlin said about 1,000 students will take part in the living history events Thursday and Friday. The event will be open to the public Saturday.

“There will be stations where everyone who attends will be able to see the various American Indian tribes,” Hamlin said. “They will be portraying the chieftans and telling how they worked with or against Andrew Jackson in the War of 1812.”

Hamlin said the event will be a learning opportunity for adults and students who didn’t realize Alabama had an involvement in the War of 1812.

“Most people don’t realize that since we weren’t a state, we had much involvement,” she said. “Andrew Jackson traveled down the Trace where American Indians were located.”

On Saturday, vendors will display and sell handmade arts and crafts from that period. Food vendors will be on hand, with several serving traditional period food.

At 7 p.m. Friday, a banquet will feature representatives of the Chickasaw, Cherokee, Creek and Choctaw nations at the Round House at the Tuscumbia Depot in Tuscumbia.

Tickets to the banquet are $20 and available at Colbert County Tourism office and Cold Water Books, both in Tuscumbia, and the Florence-Lauderdale Tourism office in Florence.

“This is the first time we’ve had an opportunity to do this on a site as close as possible to where it would have happened,” Hamlin said.

What: Native Americans Role in War of 1812 commemoration

Where: Colbert Ferry on the Natchez Trace Parkway, mile marker 327.3.