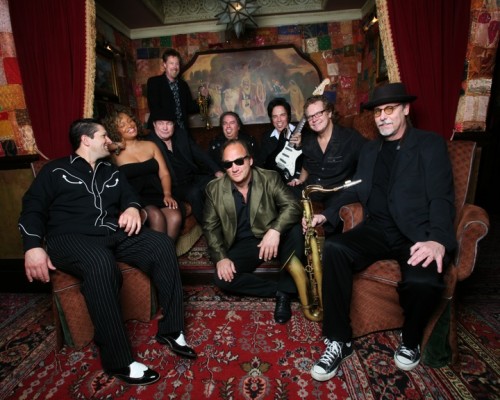 DENVER, April 23, 2015 /PRNewswire-USNewswire/ — The American Indian College Fund (the College Fund) has signed Jim Belushi and The Sacred Hearts to perform live at its 25th Anniversary Gala, to be held Friday, May 8 from 6:30-10:30 p.m. at the legendary Drake Hotel. The formal fundraising event will benefit Native American higher education and celebrate the College Fund’s mission to provide access to higher education for all Native people.

VIP ticket-holders will enjoy a special reception and the opportunity to meet Jim Belushi.

A silent auction featuring Native art and unique items will also be held at the event. In addition, the College Fund will be accepting bids for a guest to perform the song “Soul Man” with Jim Belushi and The Sacred Hearts that evening.

TULALIP – Marysville School District’s recent decision to adopt the Since Time Immemorial curriculum as part of their standard curriculum was a big step in addressing the need for Native representation in their schools. Cultural specialist Chelsea Craig, a Tulalip Tribal member who works at the district’s Quil Ceda Tulalip Elementary school says, implementing STI alone will not be enough to address the disconnect schools have with Native students. She is hoping a new change in the district’s paraprofessional requirements will help close that gap.

Paraprofessionals according to the district’s website are “responsible for providing assistance to students under the direct supervision of certificated staff in classrooms or other learning environments as assigned. Although not certified as teachers they act as assistants to teachers and other school staff, making this position great for those who are seeking a career in education. To become a paraprofessional one needed a two-year degree as part of the requirement list that includes background check and ability to pass district training. Now the two-year degree requirement has been dropped and replaced with the requirement to have a high school diploma or equivalent. This change is what Craig is hoping her Native people take advantage of and become involved with their local schools.

“Historically our people have had a mistrust in education, starting from the boarding school era, and then each generation [following] there is still an underlining feeling of mistrust. By having more Native faces in the schools it helps to make schools feel less like an institution to our Native students and more like a family atmosphere,” said Craig.

Four Marysville School District schools are located on the Tulalip Reservation. The schools’ student population adds to the large number of Native students scattered throughout the district. This high concentration of Native students makes a unique partnership between the Tribes and the district. Together both have created initiatives to support students and close the achievement gap, especially in math and literacy.

“Passing STI was huge because we all bring our own wealth of knowledge about who we are and we can share that with our kids,” said Craig.

STI curriculum provides a basic framework of accurate Indian history and understanding of sovereignty that is integrated into standard learning units. Teachers are provided training on tribal history and culture. Quil Ceda has taught this style for some time, gaining national attention for their diverse school culture.

“We are finding that when we teach about culturally relevant topics the engagement is naturally much higher. The kids are motivated to do their work and they are excited about learning about their own culture, and non-Indian students are excited about learning as well. We just need as many Native faces on campus as possible, and if we can’t have them as teachers, having them as paraprofessionals is a great next step,” said Craig. “It makes such a big difference for our kids to see their own people in roles that are inspirational to them.”

If you are interested in becoming a paraprofessional with the Marysville School District visit their website at www.msd25.org or call the district at 360-653-7058.

DENVER, Oct. 16, 2014 /PRNewswire-USNewswire/ — The American Indian College Fund (the College Fund), a national Native education non-profit, today announced that Comcast and NBCUniversal is partnering with them to further the cause of Native American higher education with a donation of $5 million of advertising for its 2015 public service announcement (PSA) on its cable system and an additional gift of $500,000 of in-kind services and cash. The support will help the College Fund launch its 25(th) anniversary goals to increase Native American scholarship support and financial assistance for the nation’s tribal colleges and universities to increase the number of Native Americans with a higher education.

Comcast and NBCUniversal’s commitment follows its 2013 donation of more than $6.35 million in television advertising time for the College Fund’s 30-second Help A Student Help A Tribe (www.tribalcollege.org) PSA. Comcast and NBCUniversal played the advertisement over several weeks in nine major metropolitan markets at prime viewing times, resulting in increased public awareness about the need to support Native higher education. Internationally renowned advertising agency Wieden+Kennedy and award-winning director Joe Pytka donated their talents to collaborate on the production of the  PSA, which depicts the impact one person has on their Native American community after earning a higher education.

Cheryl Crazy Bull, President and CEO of the American Indian College Fund said, “As indigenous people, we honor storytelling as a means of sharing our values and our way of life. The American Indian College Fund’s partnership with Comcast and NBCUniversal allows us to bring our story to a broader audience.  The engagement of all Americans in the education of tribal people is strengthened when they hear our story.  We appreciate that Comcast and NBCUniversal have allowed us to use their technology to share who we are with the rest of the country.  They are part of the movement to improve American Indian higher education and we are proud of our partnership with them.” 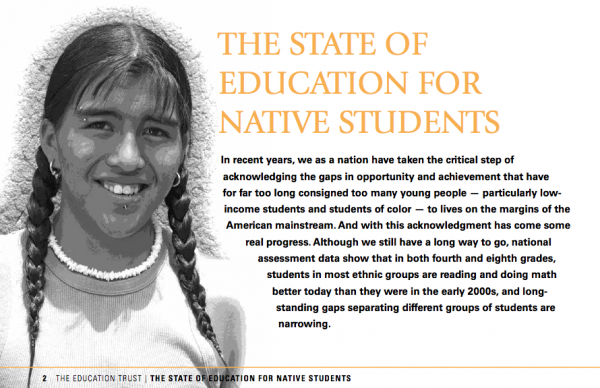 The Education Trust, a nonprofit organization that focuses on student achievement gaps, has released a new report, “The State of Education for Native Students,” and the state is not good—to say the least.

The hard numbers are eye-opening. “In 2011, only 18 percent of Native fourth-graders were proficient or advanced in reading on the National Assessment of Educational Progress (NAEP), compared with 42 percent of white fourth-graders,” the report states. “In math, only 17 percent of Native eighth-graders were proficient or advanced, and nearly half (46 percent) performed below even the basic level. For white students, the pattern was almost exactly the reverse, with 17 percent below basic and 43 percent proficient or advanced.” NAEP results for Native students improved more slowly between 2005 and 2011 than for any other major ethnic group. “As a result, while Native students were performing better in fourth-grade reading and eighth-grade math than African American and Latino students in 2005, by 2011 that lead had all but disappeared,” the report finds.

On the higher education front, the report finds that of the Native students who enrolled in a four-year college in the fall of 2004, only 39 percent completed a bachelor’s degree within six years. It was the lowest graduation rate for any group of students.

“Our country’s focus on raising achievement for all groups of students has left behind one important group—Native students,” said Kati Haycock, president of the Education Trust, in a statement. “To ensure that all Native students succeed, we must do more and better for them starting now.”

“There’s an urgent need to pick up the pace of improvement for Native students in this country,” added Natasha Ushomirsky, Education Trust’s senior data and policy analyst and author of the brief.

The good news is that the poor trends are far from inevitable, as the report points out that some states, schools and institutions of higher education are already working hard to ensure progress for Native students.

Heather Shotton, president of the National Indian Education Association, said her organization is “troubled” by the achievement statistics highlighted in the report, but it helps to focus on some success stories that illustrate these trends are not irreversible.

“As noted in the report, some states are currently raising Native academic achievement outcomes,” Shotton said. “Among other successes, increased tribal and Native community involvement in Oregon and Oklahoma ensure Native-serving schools include culture-based education and provide resources for language immersion, which as research shows, increases academic outcomes.”

But the biggest problem for both programs that are struggling and for those that are succeeding in aiding Native students, Shotton said, is ongoing federal sequestration that inordinately harms Indians dependent on federal funds.

“[S]equestration has limited the success of such programs—disproportionately affecting America’s most vulnerable populations,” Shotton said. “For tribes and educators working tirelessly to reverse the disparaging statistics, sequestration has reduced budgets, increased class sizes, and reduced staff when Native students need them most.”

NIEA is currently asking federal lawmakers to leave Native education programs held unharmed as sequestration continues to be implemented, or for Congress to work with the Obama administration to implement a planned reduction measure, rather than across-the-board cuts that disproportionately diminish the education of those who need it most—Native students.