U.S. Chamber of Commerce’s Executive Vice President for Government Affairs Bruce Josten sent a letter to members of the House Committee on Natural Resources in support of H.R. 1548, the “Native American Energy Act.”

As the letter states: 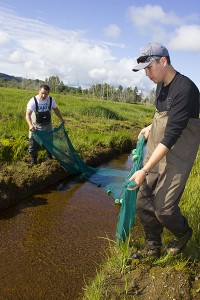 Skokomish steelhead biologist Matt Kowalski and natural resources technician Aaron Johnson slowly drag a seine net through one of the small channels in the Skokomish Tidelands to gather a sample of marine life.

The Skokomish Tribe has solid data showing how salmon are using the Skokomish Tidelands after a year of monitoring the 400-acre restored estuary.

While the tribe monitors the estuary year round, the first full year of sampling (December 2011 to November 2012) showed 20 fish species, including chinook, chum and coho salmon, using both the large and small tidal channels in the restored areas of the estuary.

Prior to 2006, the estuaries had been filled with fish-blocking culverts, dikes and roads for 70 years, preventing development of good fish habitat. Restoration started in 2007, which included removing man-made structures and opening historic tidal channels that allow juvenile fish to find places to feed and hide while heading out to the ocean.

“Some of the small channels are old drainage ditches that had limited fish access and others are completely newly formed channels from the restoration,” Kowalski said. “Over time, a more complex system of small channels will form and provide more and higher quality habitat for fish.”

In addition to fish monitoring, restoration work will continue this summer with more dike and culvert removal, connecting the restored 400-acre estuary to 600 acres of forested wetlands.