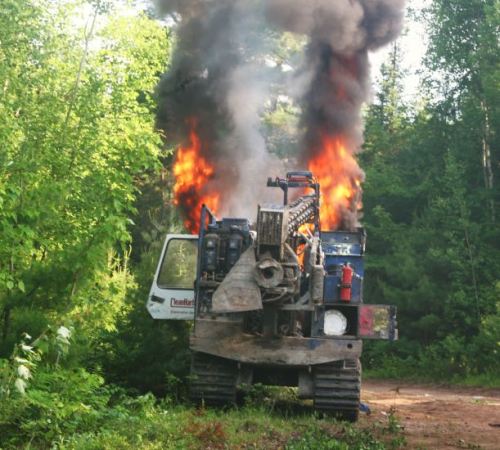 Halifax Media Co-op reports that a piece of drilling equipment was set ablaze on the 24th, by person or persons unknown.  This comes amidst escalating resistance to hydraulic fracturing by indigenous peoples in Elsipogtog, “New Brunswick”.

This comes after numerous direct actions, the midnight seizure of drilling equipment, and a local man being struck by a contractor’s vehicle. 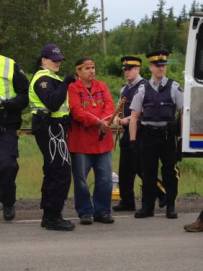 Twelve people were arrested Friday morning by the RCMP at the site of a sacred fire as part of an on-going protest in New Brunswick over seismic testing in the area.

RCMP spokeswoman Cpl. Chantal Farrah said the arrests were made because people were attempting to block trucks and workers.

Farrah said seven men and five women were taken into custody on Route 126 outside Moncton near Elisipogtog First Nation.

The sacred fire was lit by members of Elsipogtog on June 11 beside a highway where seismic testing vehicles are searching for shale gas deposits.

Opponents of the exploration fear that once the company, SWN Resources Canada, finds shale gas, it won’t be long before it employs a controversial drilling technique called hydraulic fracturing, better known as fracking, to get at it.

Photos on social media show some of the arrests, including one that appears to be a man holding a sacred pipe, with his hands in plastic cuffs.