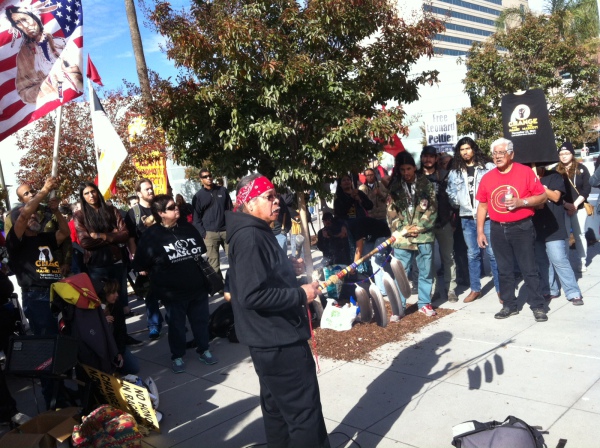 OCCUPIED TAMIEN OHLONE TERRITORY (Santa Clara, California) – After successful demonstrations in O’odham (Glendale, Arizona) and Dakota (Twin Cities, Minnesota), four-hundred Indigenous Peoples and their allies poured into Tamien in solidarity with a national grassroots campaign to change the name and mascot of the Washington NFL team. Traveling by carpool, Bay Area Rapid Transit (BART), and out-of-state flights, many amplified a growing voice for decolonization in sports.

The demonstration began at 8 a.m. with a prayer at one of many desecrated sacred sites (shell mounds and burial grounds) maintaining its indigenous Ohlone place name, Ulistac. According to Corrina Gould, a Karkin and Chochenyo Ohlone, Uli is the name of an Ohlone warrior who inhabited the area and stac refers to place/land. The prayer to the land and ancestors was followed by a march to Levi’s Stadium held prior to the game between San Francisco and Washington.

The peaceful event included a two-hour series of passionate and informed speeches from local, regional, and national activists, including people Indigenous to the area and upcoming leaders like Jacqueline Keeler of Eradicating Offensive Native Mascotry (EONM) and Dahkota Brown a 16-year-old Wilton Miwok student and founder of Native Education Raising Dedicated Students (NERDS). Elders who’ve inspired future generations also spoke on the topic, including Charlene Teeters and Clyde Bellecourt of the National Coalition on Racism in Sports and the Media (NCRSM).

Asian, African, and European people also educated fans by engaging, chanting, and holding picket signs and banners. Tribal African music blessed the event and recognized the similar histories between the African and Indigenous diaspora. Mexica (Aztec) dancers joined together in prayer, symbolizing the remembrance of the so-called Latino/Hispanic’s Indigeneity and pan-Indigenous interests across the colonial US-MX border.

Radio and television ads criticizing the nickname were aired throughout Ohlone and Miwok territories leading up to the game. Many broadcasters became allies when they chose not to mention Washington’s mascot. Audiences must understand the scalps of Indigenous Peoples were captured to collect bounties from the United States and expand White Supremacy outside of Europe.

Although Washington’s team owner, Dan Snyder, has vowed to “never change the name” and the NFL commissioner, Roger Goodell said earlier this year the nickname has been “presented in a way that honors Native Americans,” the demonstrations outside Levi’s Stadium and nationwide indicate Indigenous decolonization and self-determination is inevitable.

As fans passed the demonstration, many were quite surprised. “I’ve been a Washington fan for a long time and I’ve seen more resistance the last few years,” says Brian Jones, 35. He continued, “This demonstration helps me understand the mascot impacts actual people. It made me think about the other side of this issue.” John, 29, agreed saying, “When I see actual Native American’s are offended—I have to respect that.”

A die-hard Washington fan, Robert Magnini, 60, said, “I’ve been a fan since I was a kid. I think the name is offense and we need to change the name as soon as possible.”

Not all Indigenous Peoples agree, including Joseph Rey Potter, 14, who passed the demonstration wearing a Washington jersey and a Pomo baseball hat. “My Dad was a fan, so I just stayed with it. I understand it’s racist, but I’m just a fan of the game.” Potter concluded, “If they changed their name, I’d be a bigger fan.”

Kris Longoria and Antonio Gonzales, co-chairs of the Bay Area Coalition Against Racism in Sports and Media, said they will continue to escalate pressure on the NFL football team and build more partnerships with local organizations and government institutions.

Many urgent struggles exist across the Western Hemisphere and we must all do our part to challenge colonialism and honor Indigenous nations, leadership, and goals.

“PEOPLE SEE THIS ISSUE IS WINNABLE, ATTAINABLE, AND THEY BECOME EMPOWERED TO MOVE ONTO THE BIGGER ISSUES,” COMMENTED ANTONIO GONZALES.

A grandmother and her granddaughter appeared severely wounded, covered in bloody hair and hair buns held together with knives. “Redskin means someone whose been scalped, so me and my grandma put fake blood all over to show what a redskin means,” said Calissa Gali, 11. “None of my friends know what redskin means. They should learn at school, but some of the teachers don’t want to talk about it.”

Sacred Sites Protection & Rights of Indigenous Tribes (SSPRIT) has transferred the pain of another desecrated Ohlone Shell Mound in Karkin by decolonizing Vallejo High School’s Apaches and Solano Middle School’s Chieftains this year. The connections between appropriated sacred sites and stereotypes in sports are undeniable.

SSPRIT are now contractors, collaborating with students and administrators to educate about Indigenous mascots at school assemblies. Teacher training was also included in the negotiations to foster an integrated ethnic studies program across the school district. A duplication of this attainable model is also occurring with the Carquinez Coalition to Change the Mascot (CCCM) for John Swett High School Indians in Karkin (Crocket, CA).