BY AMELIA DICKSON, The Olympian

House Resolution 2270 would also create a national historic site where the 1854 Medicine Creek Treaty, which established reservations and fishing rights for Puget Sound tribes, was signed.

“When Billy Frank Jr. told his story, he was a fisherman trying to do what was right,” Heck said in a press release. “But in the story of our state, he is a leader who inspired a movement for justice, and dedicated his life to collaborating with others in order to safeguard our environment for everyone.” 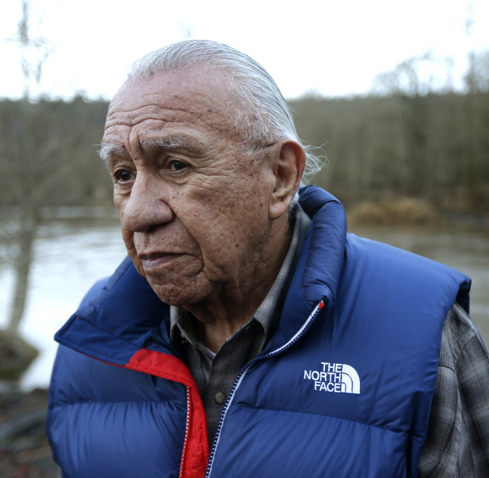 Billy Frank Jr. poses for a 2014 photo near Frank’s Landing on the Nisqually River in Nisqually, Wash. Frank, a Nisqually tribal elder who was arrested dozens of times while trying to ‘assert his native fishing rights during the Fish Wars of the 1960s and ’70s. (AP Photo/Ted S. Warren, File)

The bill would create a National Historic Site to mark the 1854 Treaty of Medicine Creek, which took land from natives but did guarantee them the right to take fish “at all usual and accustomed stations . . . in common with the citizens of the territory.”

“I loved Billy Frank:  He was one of the greatest men I have met in my life,” said U.S. Rep. Denny Heck, D-Wash., the principal author of the legislation.  “He is our Martin Luther King, our Desmond Tutu, our Nelson Mandela.”

Frank was viewed differently when he launched Indian fishing rights protests on the Nisqually in the 1960′s.  He was arrested 50 times, starting at the age of 14, for “illegal” fishing on the Nisqually River, where he was born and lived, and where his ancestors lived.

He died last year, at 83, as a recipient of the Albert Schweitzer Humanitarian Award, a person of vast credibility who began with a simple message.  “He said simply, Treaties are the word of America, and America should keep its word,’ ” ex-Gov. Mike Lowry recalled.

The struggle for fishing rights became a seminal — perhaps THE seminal — episode in the modern history of Native-American rights.

“I have a particular view of how this impacted ‘Indian Country,’ ” said Heck.  The issue of treaty rights to fish gave Native Americans a platform on resources.  It gave them standing on other issues, and led to the National Indian Gaming Regulatory Act.  And that act led to the fastest drop in Indian poverty we have ever seen.”

In this 1960′s photo, Billy Frank Jr., left, fishes on the Nisqually River near Olympia, Wash., with his half brother Don McCloud. Frank, a Nisqually tribal elder, was arrested dozens of times while trying to assert his native fishing rights during the Fish Wars of the 1960s and ’70s,. (AP Photo/Courtesy Northwest Indian Fisheries Commission, File)

How so? “Billy was the spear point in treaty rights,” Heck added.

An historic moment in Northwest history came in 1974, when conservative U.S. District Judge George Boldt ruled for the Native Americans, that treaty Indians were entitled to 50 percent of the salmon catch and could fish in “all usual and accustomed grounds and stations.”

When he was 14, Bill Frank had told game wardens who arrested him:  “Leave me alone, goddamn it! I live here.”

In later years, Frank would replace confrontation with cooperation in restoring the salmon runs that help define the Pacific Northwest.

“When a bunch of Really Important People get together in a conference room, you can always tell Mr. Frank even from afar,” author Timothy Egan once wrote.  Amid the government and corporate executives, all tasseled loafers and silk ties, he’s the one with the long pony tail, the gold salmon medallion and the open necked shirt.

“And he’s the one with the scars — nicks, cuts and slash marks — from a lifetime of being harassed by people who don’t like Indians, and from an all-season outdoor life.”

The Nisqually Wildlife Refuge is a suitable honor.  Frank lived to see levies and dikes come down at the mouth of the Nisqually River, with estuary habitat restored where salmon can grow up, and where visitors can witness a multiplicity of shore birds.

“The absence of natural estuaries like this is part of the reason why the region is still going backwards rather than forwards on Puget Sound salmon,” Heck noted.

Heck has done his homework on the bill.  He has lined up as a cosponsor influential Oklahoma Republican Rep. Tom Cole, a member of the Chickasaw Nation. He has also signed up Alaska’s crusty Republican Rep. Don Young.

Canada geese in the Nisqually National Wildlife Refuge, a sanctuary for birds and a place where young salmon can grow up.

A cosponsor from this state, Rep. Cathy McMorris Rodgers, is a usually hyper partisan member of the House Republican leadership.  “Her signing on says to the leadership, ‘This is O.K.’,” said Heck.

He has also secured backing from the Northwest Indian Fisheries Commission — long headed by Billy Frank — and the National Congress of American Indians. Brian Cladoosby, chairman of the Swinomish Tribe, is currently president of the congress.

The legislation, officially “The Billy Frank, Jr., Tell Your Story Act” creates an opportunity for the Nisqually, Muckleshoot, Puyallup and Squaxin Island tribes to tell their stories.  The U.S. Interior Secretary will coordinate with then creating materials for the Medicine Treaty National Historic Site.

Bill Frank made his last appearance just over a year ago, at a meeting in Suquamish with U.S. Interior Secretary Sally Jewell.

Just over a week later, he died.  “When Billy spoke, you listened: We saw that firsthand just last week when he commanded a room that included tribal leaders, fisheries officials and the secretary of the interior,” U.S. Rep. Derek Kilmer, D-Wash., recalled of the meeting.

Not bad for a guy with a ninth-grade education.”Today, because of the Boldt Decision, the state and tribes are partners in the management and preservation of resources that are foundational in the economy of the state,” Sen. Maria Cantwell, D-Wash., said in eulogizing Frank.

Just as Frank spoke of cooperation and conservation, the wildlife refuge at the mouth of the Nisqually speaks of Billy Frank Jr. 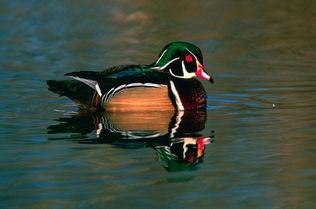 U.S. Fish and Wildlife Service
Wood ducks are among the many birds you can see at Nisqually National Wildlife Refuge.

By Sharon Wootton, The Herald

If you haven’t done any recent bird-watching in the Nisqually National Wildlife Refuge, now’s a good time. Birds of all sizes and stripes are passing through, and you can watch them from an excellent boardwalk.

One birder reported seeing a great egret, a great horned owl family and a rufous hummingbird chasing a Northern shrike. Look for wood ducks, coots, yellow-rumped warblers and wrens, and expect cliff swallows to be building nests on the refuge buildings. About 175 species of birds have been recorded here, so it’s worth a trip.

To get to the refuge, take exit 114 off I-5 between Olympia and Fort Lewis.

One physical highlight of the estuary is the Twin Barns Loop Trail, which includes a mile-long boardwalk through woods, grasslands and freshwater marshes.

There are several trails that include viewing platforms, towers and mounted viewing scopes. Several places on the boardwalk have railings that are lower than usual so that wheelchair-bound birders have better views.

For more information, go to www.fws.gov/refuge/Nisqually.

Trail to Turtleback. The Washington Trails Association is hosting a Volunteer Vacation from May 4 to 11 on Orcas Island as well as several events on May 10.

The San Juan Preservation Trust has planned a new trail to the Turtleback Mountain Preserve with stunning views that have been inaccessible. The preserve protects the entire ridgeline.

Although the weeklong vacation is full, May 10 options include working with the trail crew, hiking a 3-mile round-trip section to the turtle’s head, or meeting the volunteers for a barbecue dinner.

For more information, go to www.wta.org. While you’re there, check out the other vacations; some are already full.

The Washington Fish and Wildlife Commission has agreed to consider four options to provide more protection to that population, and those options, as well as no change and a total ban, are open to public comment.

Petitions signed by hundreds of scuba divers and others sought protection for octopuses from recreational harvest. For more information and to comment, go to www.wdfw.wa.gov/fishing/regulations/octopus, through May 31.