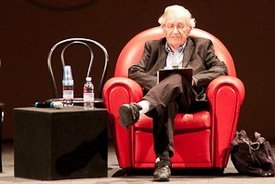 Canada is on a race “to destroy the environment as fast as possible,” said noted linguist and intellectual Noam Chomsky in an interview with the Guardian published Friday.

“It means taking every drop of hydrocarbon out of the ground, whether it’s shale gas in New Brunswick or tar sands in Alberta and trying to destroy the environment as fast as possible, with barely a question raised about what the world will look like as a result,” Chomsky told the British paper, referring to Harper’s energy policies.

Yet there is resistance, he said, and “it is pretty ironic that the so-called ‘least advanced’ people are the ones taking the lead in trying to protect all of us, while the richest and most powerful among us are the ones who are trying to drive the society to destruction.”

His comments echo those he wrote this spring in a piece for TomDispatch entitled “Humanity Imperiled: The Path to Disaster.” He wrote: “[A]t one extreme you have indigenous, tribal societies trying to stem the race to disaster. At the other extreme, the richest, most powerful societies in world history, like the United States and Canada, are racing full-speed ahead to destroy the environment as quickly as possible.”

To organize around climate change, Chomsky told the Guardian that progressives should not frame it as a “prophecy of doom,” but rather “a call to action” that can be “energizing.”

As the country continues what David Suzuki called a “systematic attack on science and democracy” and “we are facing an irreversible climate catastrophe like the tar sands,” Canada’s race to disaster shows no signs of abating.