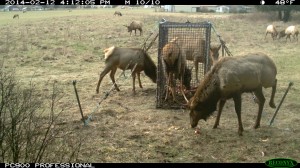 To get more precise information about the herd’s movements, the Stillaguamish Tribe’s Natural Resources Department acquired global positioning system (GPS) collars that transmit point location data every 85 minutes. This is a cost-shared project with the Tulalip Tribes. So far, with support from Suquamish, Sauk-Suiattle and Upper Skagit, they have collared five animals and plan to collar four more.

“The main focus of the project is tracking the movement and seasonal habitat use of the lowland elk that frequent the Skagit River Valley and Acme areas,” said Jennifer Sevigny, wildlife biologist for the Stillaguamish Tribe. “These data are important for our future elk management decisions.”

Because of an increasing number of collisions between elk and vehicles, the state Department of Transportation (DOT) is partnering with the tribes to deploy three GPS collars to determine where and when elk are crossing Highway 20. These GPS collars will be programmed differently so they can record location points at closer time intervals to detect more precise crossing locations along Highway 20.

“The GPS collars are more expensive, but they give exact information on where the elk have been,” said Chris Madsen, wildlife biologist for the Northwest Indian Fisheries Commission.

“Up to 50 elk a year may get hit by vehicles along Highway 20,” said Scott Schuyler, natural resources director for the Upper Skagit Tribe. “We’ve suggested creating wildlife underpasses and increasing lighting around the highway to reduce these impacts.”

The Nooksack elk herd had dwindled to about 300 animals by 2003, prompting state and tribal co-managers to boost the herd by relocating animals from the Mount St. Helens area, and improve forage habitat through restoration projects. The herd has now rebounded to approximately 1,400 elk.

Some property owners and farmers complain that elk from the recovering Nooksack herd destroy fences and devour crops, and have called for removing the lowland population

“All of this work will help give us a better picture of the population dynamics while helping to address the damage issue,” Madsen said. “If we’re going to consider removing elk, we need to put some science behind it.” 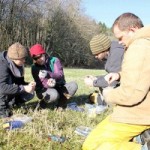 Wildlife biologists from the Stillaguamish and Tulalip tribes are testing a new way to track the population of the Nooksack elk herd using the animals’ scat.

Tribal biologists have partnered with Western Washington University’s Huxley College of the Environment to determine the most efficient way to collect DNA from elk scat. Genetic material can be found in the intestinal mucus coating the pellets. This winter, biologists sampled fresh scat using toothpicks and cotton swabs, submitting the samples to a genetics lab to determine which method is most effective at providing an animal’s unique genotype.

“This is a non-invasive method that does not require collaring animals or helicopter time to survey them,” said Stillaguamish biologist Jennifer Sevigny.

While the current method of using tracking collars and aerial surveys is expensive, it allows state and tribal wildlife managers to determine the bull-to-cow and cow-to-calf ratios needed to set harvest levels. To fit elk with tracking collars, the animals must be captured and tranquilized.

In the spring, the Stillaguamish and Tulalip tribes plan to coordinate a large population survey, sampling elk scat in the North Cascades Mountains, including forested landscapes that are hard to monitor during aerial surveys.

During the past two decades, tribal and state co-managers completed numerous habitat restoration projects to improve forage for the Nooksack herd, which had declined to about 300 animals by 2003. According to 2012 aerial surveys, the herd has rebounded to as many as 1,400 elk.