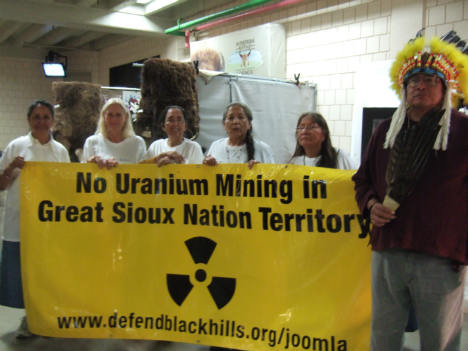 Native Americans in the northern great plains have the highest cancer rates in the United States, particularly lung cancer. It’s a problem that the United States government has woefully ignored, much the horror of the men and women who must carry the painful, life-threatening burden.

The cancer rates started increasing drastically a few decades after uranium mining began on their territory.

According to a report by Earthworks, “Mining not only exposes uranium to the atmosphere, where it becomes reactive, but releases other radioactive elements such as thorium and radium and toxic heavy metals including arsenic, selenium, mercury and cadmium. Exposure to these radioactive elements can cause lung cancer, skin cancer, bone cancer, leukemia, kidney damage and birth defects.”

Today, in the northern great plains states of Wyoming, Montana and the Dakotas, the memory of that uranium mining exists in the form of 2,885 abandoned open pit uranium mines. All of the abandoned mines can be found on land that is supposed to be for the absolute use of the Great Sioux Nation under the 1868 Fort Laramie Treaty with the United States.

The Area Agreed Upon in the Fort Laramie Treaty of 1868 (photo republicoflakotah.com)

There are also 1,200 abandoned uranium mines in the Navajo Nation, where cancer rates are also significantly disproportionate. In fact, it is estimated that 60 to 80 percent of all uranium in the United States is located on tribal land, and three fourths of uranium mining worldwide is on Indigenous land.

Defenders of the Black Hills, a group whose mission is to preserve, protect, restore, and respect the area of the 1851 and 1868 Fort Laramie Treaties, is calling the health situation in their own territory America’s Chernobyl.

The contamination from the mines escapes into the air. It poisons grain that is fed to cattle that provide milk and beef for the rest of the nation. The abandoned uranium mines of the Cave Hills in northwestern South Dakota empty into the Grand River which flows through the Standing Rock Indian Reservation. Three villages are located on the Grand River and their residents have used the water for drinking and other domestic purposes for generations. The water runoff from the Slim Buttes abandoned uranium mines empty into the Morreau River which flows through the Cheyenne River Indian Reservation. Both of these rivers empty into the Missouri River which empties into the Mississippi.

Defending their lands, their food, air and water, defending their health and right to thrive as a people, the Defenders of the Black Hills have written legislation, The Uranium Exploration and Mining Accountability Act, calling for study and remediation. This legislation proposes to place a moratorium on any processing or approval of new licenses for uranium exploration or mining operations until all abandoned mines in the country have been cleaned up.

In the last years, uranium mining interests in the United States for use at nuclear power plants has been growing. Being sold as a safer, cleaner and renewable energy, nuclear energy is on the table for America’s desire for energy independence.

However, as it has been witnessed by the Native communities suffering from the health impacts of these mines, who have also lost access to sacred sites, hunting and fishing territory, and land to grow crops, nuclear energy is just another extractive industry with serious adverse health and environmental effects.

The proposed legislation can be found at the website of Defenders of the Black Hills, along with a letter to representative Raul Grijalva from Arizona, urging him to sponsor the legislation. The uranium mines within the 1868 Fort Laramie Treaty territory were never consented to by the Native American communities who now have to suffer the effects of the poisons these mines emit.