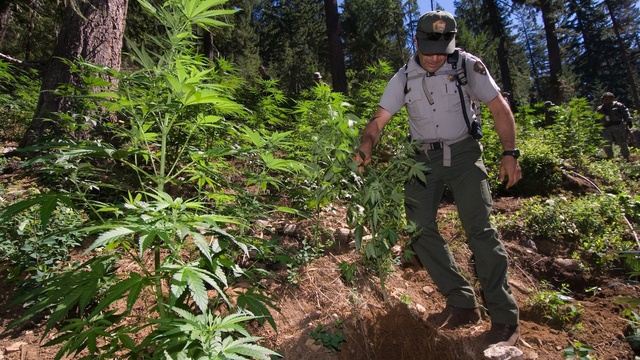 As marijuana has become more mainstream, the business of cultivating the plant has boomed. That’s true nowhere more than in coastal northern California. There, the so-called Emerald Triangle of Mendocino, Trinity and Humboldt counties is believed to be the largest cannabis-growing region in the US.

But as the hills have sprouted thousands of new grow operations, haphazard cultivation is threatening the recovery of endangered West Coast salmon and steelhead populations.

The Eel River runs through the heart of the Emerald Triangle, draining California’s third-largest watershed. And it’s a key battleground in the struggle to save once-abundant Northwest coastal salmon runs.

Over the decades, poorly-regulated fishing, grazing and logging have all taken their toll on the fish that spawn in the river. Drought and ocean conditions likely related to climate change are making life hard, as well.

But Scott Greacen, who heads the conservation group Friends of the Eel River, says there’s a newer and growing threat to the salmon.

“I think it’s pretty clear that the marijuana industry at this point is the biggest single business in terms of its impact on the river,” he says.

After California voters approved medical marijuana in 1996, the Emerald Triangle’s culture of small-scale, homestead pot cultivation that dates back to the 1960s found itself increasingly overwhelmed. Many local growers, plus thousands of newcomers, geared up to take advantage of the profits to be made in the so-called Green Rush.

That’s led to an explosion in the number and size of pot farms dotting the hills. And that’s meant more water being pulled from the streams, and more sediment, pesticides and fertilizers draining back in.

Scott Bauer works on salmon recovery for the California Department of Fish and Wildlife. He says research has shown huge amounts of water are being diverted from streams and rivers across the region.

“It’s possible that in some watersheds, marijuana cultivation is consuming all the water available for fish,” he says.

But Kristin Nevedal, who heads the Emerald Growers Association, says as the rural region has become more suburbanized, the blame can’t be laid just on pot farmers.

Still, Nevedal concedes commercial marijuana cultivation is a big part of the problem. A contributing factor, she says, is that growing medical pot is allowed under state law, but there are no rules overseeing how it’s grown. Plus, growing is still a felony under federal law.

“So what we have with cannabis is this agricultural crop that’s produced for human consumption that’s likely the number one cash crop in the state that has zero regulations attached to it,” Nevedal says.

Fish and Wildlife’s Bauer agrees many of the environmental problems stem from that legal gray zone.

“The timber industry is heavily regulated. Farmers are regulated,” he says. “All these different industries that could have impacts are regulated. And this is the only one that isn’t.”

In an effort to fill that gap, Bauer says his office will issue permits to people who want to divert water for agricultural purposes, with no questions asked about their crop.

“It doesn’t matter if you’re growing avocados or oranges or grapes for that matter,” he says. “We don’t really care what it is. What I’m concerned about are impacts to salmon and steel head, coho in particular.”

So far, Bauer says this “Don’t Ask, Don’t Tell” policy has coaxed only a handful of cannabis farmers to get permits to meet higher environmental standards.

“There’s just this tremendously complicated legal environment which makes it really hard for farmers who would like to come into compliance, who would like to use best practices on their farms to make progress,” he says.

The third-generation Humboldt County resident says the decades-long history of heavy-handed law enforcement efforts to eradicate pot from the Emerald Triangle has left a legacy of suspicion.

“The culture of prohibition has really damaged the farmers’ trust in the government and government agencies so there’s a lot of reconciliation work that needs to take place to rebuild trust in the minds of the people we’re that asking to comply,” he says.

Nonetheless, Allen says he’s confident most farmers want to do right by the land and the salmon. As part of a project with several community groups, including the Emerald Growers Association, he’s helped develop a manual of best practices for growers. It offers suggestions for using less water, for minimizing erosion and for keeping runoff out of streams.

A first run of 2,000 of the guides was distributed free around the region, and an expanded version is in the works. Allen is optimistic this kind of voluntary community effort will help.

“There’s probably no such thing as a perfect, zero impact farm,” he says. “But if we give people the information and the knowledge they need, they will make improvements.”

Allen says what’s really needed is a proper set of rules. But while the need to regulate this burgeoning industry is widely acknowledged, there’s little visible sign of movement in that direction in Sacramento.

For now, the future of northern California salmon runs seems to depend at least in part on the good intentions of cannabis growers in the Emerald Triangle.

This was first reported for Jefferson Public Radio.