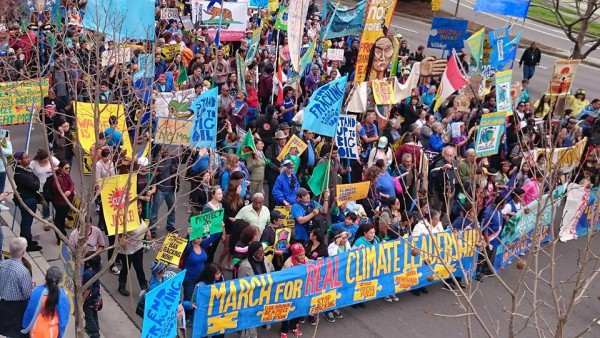 The marchers assembled in front of City Hall in downtown Oakland, then traveled nearly two miles to the Lake Merritt Amphitheater where a rally was held. Various marchers held signs proclaiming “Idle No More,” “Our Oceans Are Rising, so we Rise Up,” ” No Keystone Pipeline,” “Save the Delta,” “Save Mother Earth,” among many others.

DESPITE RAIN AND WIND, THE MARCH WOUND ITS WAY THROUGH DOWNTOWN OAKLAND WHILE NATIVE WOMEN SANG THE “WOMEN’S WARRIOR SONG.”

Pacific Islanders sang traditional songs, along with many marchers drumming, singing, and sending a peaceful yet powerful message to Gov. Jerry Brown.

The march was organized by a large coalition of environmental organizations composed of the Indigenous Block to end fracking that included SF Idle No More, led by Pennie Opal Plant, Marshall Islanders, various California tribes, including Ohlone leader, Corrina Gould, Los Angeles Chapter of AIM, AIM West of Northern California, and many Native Americans from the Bay Area and other parts of California. The Indigenous Block led the march. Other organizations included labor unions, local environment justice groups such as 350.org ,Food and Water Watch, national NGO’s, various health activists, community activists, students, and those committed to protecting water and air for generations to come.

“Fracking is hurting our communities. It is sucking our drought ridden state of precious water resources, contaminating our groundwater in a region where 25% of the nation’s food is grown, and contributing to the impending climate crisis. Oil companies have made Californians feel powerless and silenced, because our governor is only listening to their money,” UC Berkeley student Eva Malis said.

Contingents of marchers traveled from San Diego, Los Angeles, Fresno, and the central coast of California. The rally at Lake Merritt amphitheater began with a traditional Pacific Island chant, then a prayer by Bay area Marshall Island community leader Abon-Burch. Fuifuilupe Niumeitolu then introduced a group of Marshall Island youth who sang traditional songs about water and love for their Moana. Dianne Thomas, a community organizer from Carson, California reported that in 2011 Occidental Oil Company wanted to re-open old oil wells and build 200 new wells over a period of ten years.

“As a community, we continued to organize and fight Occidental Oil, even though we only had the support of one council member in our favor. The draft EIR report never got out of the response phase, and eventually Occidental Oil pulled out of Carson. When we all work together, we can prevail,” said Thomas.

On Monday, February 8, organizers of the anti-fracking march and rally will present Gov. Jerry Brown with 200,000 signatures demanding an end to fracking throughout California. 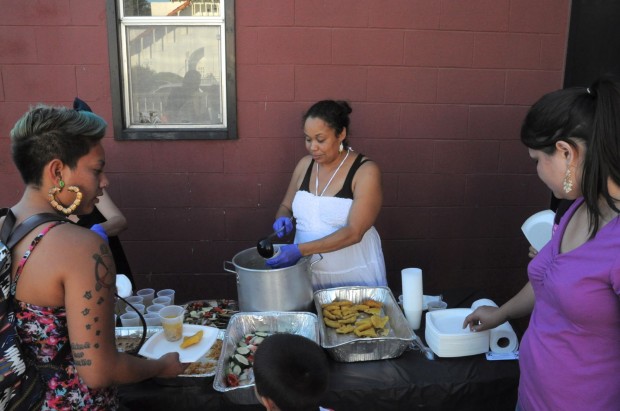 On a sunny afternoon, Oakland chef Crystal Wahpepah is measuring her success in many portions: a scoop of walnut pudding, a hunk of salmon with roasted zucchini, a ladleful of summer squash stew in a plastic cup. The occasion is the opening of a new Native American Health Center office in Richmond, and the food is the fruit of Wahpepah’s five-year effort to build a business.

“Right now it’s a good time for my menu because it’s harvest time,” she says, handing a piece of pumpkin fry bread to a guest. “I like to know where 90 percent, maybe 100 percent of my food comes from.”

In fact, she’d picked the pumpkins over the weekend at a garden she keeps with friends in Sebastopol.

Wahpepah has been passionate about cooking since she was a child, when she would visit the Kickapoo Nation in Oklahoma and help her grandmother make meals of sweet corn, bison, summer squash and pumpkin. She also recalls the recipes she learned in the home of her uncle, who was active in the American Indian Movement in Oakland and hosted visitors from tribes across the nation.

“Those are the best memories of my life,” she said. “I learned what food the Sioux made, what the Apaches made.”

The lack of Native American eateries is particularly striking given the diversity of the Bay Area food scene, which places a premium on local and ethnic foods. So far, Wahpepa says, she knows of no one else who’s making dishes like her savory potatoes wrapped in seaweed from the Pacific Coast, or her lemongrass tea from the Great Plains.

According to Tracy Stanhoff, president of the California American Indian Chamber of Commerce, the dearth of Native-owned business is due in part to a catch-22: when few Native Americans run businesses, would-be Native entrepreneurs struggle to find people who can offer them advice or financial help.

“There is a lack of mentors and a lot of first-generation business owners who are scraping to get by,” she said.

But Stanhoff doesn’t think urban Indian entrepreneurs face significantly different obstacles than other ethnic minorities. On tribal lands, tangled property laws and an absence of financial institutions mean that credit and collateral are often in chronically short supply. But in cities, Stanhoff says, the situation is not the same.

“There are barriers, but in urban areas it’s not too much different than for a regular small business,” she said. “We’re generally an underserved population and lack access to capital, but it can be done.”

Wahpepah grew up in East Oakland and studied marketing at American Indian College in Phoenix, Ariz., and, briefly, cooking at the California Culinary Academy. But with little in the way of capital, she struggled to get her business off the ground until she was accepted into La Cocina,an incubator program in San Francisco designed for low-income entrepreneurs.

At La Cocina, she learned about loans available through Kiva Zip, an offshoot of the successful micro-loan website Kiva.org. With an endorsement from Oakland’s Native American Health Center, she secured a $5,000 interest-free loan to help her pay for business permits, cooking space, equipment and other start-up costs.

“It helped tremendously,” she said of the Kiva Zip loan, which she received in December 2012. “I love Kiva because you can express yourself. Instead of looking at your credit, they look at your passion.”

She currently supplements her catering by teaching classes on Native American foods.