King County’s executive says the region is prepared for potential oil train disaster, but there remains a serious risk.

On Tuesday, emergency responders gathered in an operations center to practice how they’d work together if a train were to derail and explode at a South Seattle rail yard.

A minor oil train derailment in Seattle last month and explosive disasters around the United States and Canada have focused attention on the danger of transporting Bakken crude.

“This is a new and significant risk for our people, our economy and our environment,” Constantine said.

The railroad said its responders would take the lead in extinguishing a fire on the tracks, and that the company also trains hundreds of local firefighters for disasters.

A BNSF spokesman estimated the Northwest now averages two and a half oil trains per day, and that 70 percent of the tank cars are of the newer, safer design.

Constantine said he is urging Congress to ban the use of older-style tank cars.

He also announced the formation of a group of regional elected leaders, the Safe Energy Leadership Alliance.

Because the federal government has oversight of the railroads, there’s little more he can do. 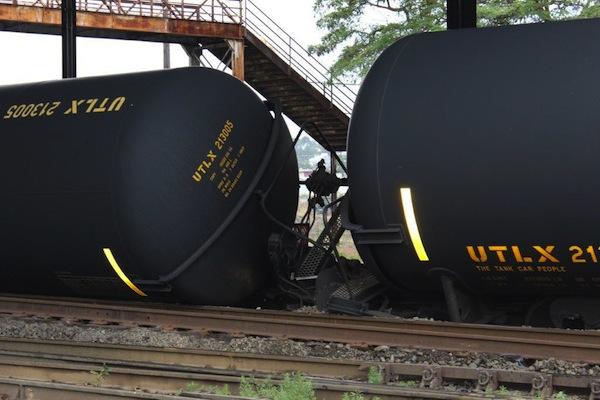 The oil train that jumped the tracks outside Seattle the other day did not do any of those things, but it still highlighted concerns about rail transport of crude, especially highly flammable oil sands bitumen.

The 100-car train operated by Burlington Northern Railroad, filled with crude from the Bakken oil fields, was pulling out of the Interbay rail yard going five miles per hour when one locomotive, a buffer car carrying sand, and three tanker cars derailed at about 2 a.m. on July 24, the Associated Press reported. Two of the tankers tilted, one to a 45-degree angle, a railway spokesman told AP. That one had to be pumped out and hauled off for repairs.

As with the other half-dozen or so industrial-train derailments over the past year—starting with the runaway train that vaporized the center of 6,000-population Lac Mégantic in Quebec, Canada, along with 47 people last summer—the Quinault Indian Nation was on hand to warn about the perils of this type of transport.

“It was sheer luck that the cars, carrying 100 loads of Bakken crude oil, didn’t spill or even catch fire,” Quinault Indian Nation President Fawn Sharp said in a statement. “If that had occurred the chances are there would have been tragic loss. If fire had occurred, the odds are it would have burned out of control for days, and oil would have made its way into Puget Sound. People need to know that every time an oil train travels by, this is the risk that is being taken.”

Tribes are not alone in their unease. Local officials also expressed consternation.

“I’m very concerned that large volatile oil trains pose significant risk for derailment, fire, explosion, loss of property and life,” King County Executive Dow Constantine told MyNorthwest.com. “We need to have a conversation about what is appropriate to ship through these heavily populated areas and what kind of notice people deserve that these shipments are taking place.”

The Quinault and other groups fiercely oppose proposals for oil train export terminals at Vancouver and Grays Harbor.

The May 2014 derailment of a grain train in Grays Harbor County did nothing to inspire confidence, either.

“These accidents have occurred before,” said Sharp, who is also president of the Affiliated Tribes of Northwest Indians and area vice president of the National Congress of American Indians, after the Seattle derailment. “They will occur again. Even with the new safety measures proposed by President [Barack] Obama and Governor [Jay] Inslee, the accidents will occur. The rail and bridge infrastructure in this country is far too inadequate to service the vast expansion of oil traffic we are witnessing.”

The railroad company’s assertion that there had been no public threat because no oil had escaped also came under scrutiny.

“I have to disagree with the statement that there was no public threat,” said Sharp in the Quinault statement. “There was. In fact, there is a public threat every time an oil train passes by. There have been too many accidents, too many derailments, too many fires and too many spills.”