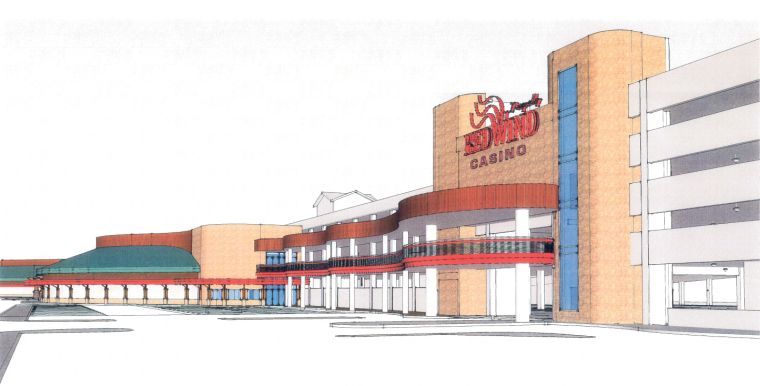 Expanded casino
An artist’s drawing shows what the Red Wind Casino will look like once a $45 million expansion project is completed. Work is set to begin in November on the project, which will add 42,700 square feet of floor space to the casino, including a non-smoking section. The project will be completed in December 2014.

OLYMPIA, WA – A $45 million expansion of the Nisqually Red Wind Casino will bring 70 new jobs to the area and will continue to fuel a significant economic expansion that has occurred within the Nisqually Indian Tribe in the last year, said Cynthia Iyall, chair of the Nisqually Tribal Council.

Construction is set to begin on the casino expansion project next month and will be completed by December 2014. In all, 42,700 square feet of gaming space will be added to the current 95,000-square-foot structure. A remodeling of the parking structure will add 600 spots. The expanded space will include a smoke-free casino.

Only about 1 percent of the roughly 400 employees at the casino are members of the Nisqually Tribe, Iyall said. Many of the tribe’s 766 members are employed in tribal government positions; there are about 300 such positions.

“We rely on the surrounding community for employment, and it seems to be a good partnership,” Iyall said.

The remodeled and expanded casino will carry on with a natural elements theme begun with the construction of the Tribal Center. That building’s roof is curved to

reflect the back of a fish and the flowing Nisqually River. The old tribal building behind it is being remodeled with a pitched roof, which is reflective of a mountain, Iyall said. The upgraded casino building will incorporate grass-like elements because the Nisqually Tribe’s historic name, Schally-Absch, means people of the river and people of the grass country, Iyall said.

The original casino, which was built in 1997, is the tribe’s economic engine, Iyall said, and revenues from that business have allowed the tribe to expand its economic presence in the region. Four new tribal businesses have opened within the past year alone. The tribe has a new construction company called Nisqually Federal WHH Construction.

The tribe opened a seafood processing plant, called She-nah-num Seafood, in Tumwater about six months ago. Tribal fishermen sell their catch to the plant, which processes it and prepares it for retail sale. Then the seafood is purchased by casinos, buffets and fine-dining restaurants up and down the coast.

“We utilize our gaming as a springboard to get into other types of businesses for the tribe,” Iyall said. “It is the engine of our economic development. With a portion of these funds, we have been able to diversify our economy on and off the reservation, strengthening our sovereignty and building the tribe for the future.”

The money generated from those jobs brings security into tribal homes, Iyall said. There are just so many positives from the casino operation, she added, and the expansion will help spur future economic growth.

The casino earnings will also help fuel an upgrade of the convenience store on the reservation, the Rez-Mart. That project will begin soon and will add products and services, including perhaps a post office and office space, Iyall said.

In addition to these projects, the tribe is also extending its wastewater treatment system and is building a public safety complex, according to a statement provided by Iyall.

“The Nisqually Tribe is investing in the future,” Iyall said in that statement. “The tribal council wants to provide long-term opportunities for our members and their families — opportunities for good jobs, good health care, good homes and good education. We especially want to provide quality care for our elders.”

The tribe contributes more than $1 million each year from casino revenues to charitable and nonprofit organizations and local governments that extend the benefits of the operation into the surrounding communities, according to the statement. The current casino boasts three restaurants, 975 video lottery terminals and an assortment of gaming tables.

The tribe’s Medicine Creek Enterprise Corp. manages the casino. That corporation is chaired by John Simmons.

“We’re proud of the casino’s success,” Simmons said in the statement, “and we welcome the opportunity to keep growing, to keep generating income and to benefit our members.”

Korsmo Construction will be the general contractor for the expansion, according to a statement. That is the same company that built the new Tribal Center across the street from the casino. KMB Designs is the architect for the project.

Haggen has recalled some ground beef because of the threat of E. coli, but none of it was sold at stores in Whatcom County.

If you bought beef under the NatureSource label at Haggen or TOP Food stores outside Whatcom County, you might be affected.

Here is the information from Haggen.

Posted by DEBBIE TOWNSEND on August 1, 2013
The Bellingham Herald

BELLINGHAM, Wash. (August 1, 2013) — In an abundance of caution, Haggen, Inc. today announced it is issuing a recall prompted by a nationwide recall from ground beef supplier National Beef Packing Company. National Beef announced the recall of approximately 50,100 pounds of ground beef due to a sample testing positive for E. coli O157:H7. There have been no reported illnesses related to the recall.

Haggen’s recall is isolated to the 97% lean ground beef sold under the NatureSource label produced on July 18, 2013, with a use by/freeze by date of August 7, 2013.

The recalled item was sold in Haggen stores in Snohomish and Oregon City, as well as TOP Food & Drug stores in Olympia, Woodinville and Grays Harbor, Washington.

Haggen has removed the affected product from its stores and initiated its customer recall notification system. The company is asking customers of the affected stores to carefully check their refrigerators and freezers for recalled ground beef. Any opened or unopened products included in this recall should not be consumed and should be returned to their local Haggen or TOP Food & Drug store for a full refund.

Consumers who have questions about the recall may contact Haggen at 1-360-733-8720 or may contact National Beef’s consumer relations toll free at 1-800-449-BEEF.

By Jerry Cornfield, The Herald
OLYMPIA — Gov. Jay Inslee prescribed his plan Thursday for pumping $1.3 billion more into the state’s public school system then challenged lawmakers to buck up and pay for it by ending popular tax breaks and extending taxes set to expire this summer.The first-term governor wants to fund full-day kindergarten in high poverty schools and make preschool available for more children of low-income families.

And he’d pour half of the new money into shouldering a greater share of the bill for school bus service and the purchase of materials and supplies in each school district.

Most of the investment is a first step toward complying with a Supreme Court decision last year that found lawmakers in violation of the state Constitution by not adequately funding public schools.

“To govern, it is said, is to choose,” Inslee said after releasing a broad blueprint of his priorities for the next two-year state budget. “Today, I choose, and I believe we should all choose, education over tax breaks, and to make good on our constitutional and moral duty to quality schools for our children.”

Republicans in the House and Senate didn’t object to how Inslee wants to spend the money only his reliance on taxes to pay for it. They wished he’d looked harder to trim government spending and not put as many dollars into salaries and benefits of state employees.

“I don’t see one on there I can support,” Senate Republican Leader Mark Schoesler of Ritzville said of the list of tax breaks. “You’re not choosing between kids and tax cuts. You’re choosing between bureaucrats and tax hikes.”

House Democrats said Inslee’s plan spending and tax proposals are on the same scale as the ones in the budget they are writing.

To pay for his education plan, Inslee wants to generate $565 million by repealing or revising 11 tax exemptions most of which have been a political hit list before and survived.

Among them are ones that could lead to bottled water getting taxed and Oregon residents paying sales taxes.

Time and again Thursday, Inslee said it comes down to preserving those breaks or preparing the next generation of engineers and scientists.

“I challenge anyone, anyone in any part of the state in any industry to argue that any single one of these tax breaks is more important than the STEM education of these students,” he said.

Sen. Barbara Bailey, R-Oak Harbor, serves on the Senate budget committee that will have to approve any of them.

“I don’t think anything is more important than education other than getting our economy going again,” she said. “Adding more taxes on businesses has a dampening effect on growth.”

Inslee also wants to make permanent a hike in the business and occupation tax paid by doctors, lawyers and accountants and a 50-cent-per-gallon tax on beer. He also wants to expand the beer tax to cover all producers; today it only applies to those making in excess of 60,000 barrels a year.

Inslee hopes to bring in $661 million from these taxes which were enacted in 2010 and are set to expire June 30.

Inslee, who campaigned against raising taxes, said his plan doesn’t backtrack on that. He said he repeatedly pledged to close tax break and not seek a general tax increase.

“I am fulfilling on my commitment to the ‘T’,” he said.

For owners of small breweries the change in the beer tax means they the tax they pay on each 31-gallon barrel produced could rise from $4.78 to $20.28.

“We’re going to pass it through and it will go through to the beer drinker,” said co-owner Phil Bannan, co-owner of Scuttlebutt Brewing Co. in Everett. “Beer is a common man’s drink so this is going to hit the common man in the wallet.”

What Inslee released Thursday was his spending priorities for the two-year budget which begins July 1.

With a projected shortfall of $1.3 billion, Inslee is proposing to save $321 million by suspending the cost-of-living raises for teachers required under Initiative 732. He also suggests cutting $29.8 million in funding for alternative learning experience programs which cover costs of online and home school programs.

In other parts of his budget proposal Inslee backs full expansion of the Medicaid program. That move, he said, will reportedly save the state nearly $300 million as the federal government picks up the cost of covering the estimated 255,000 adults who could become eligible.

With release of his proposal, Inslee kicked off the budget debate in Olympia.

The Republican-dominated Senate Majority Coalition expects to release its budget early next week followed by the House Democrats.

The 105-day legislative session is scheduled to end April 28.

OLYMPIA — Washington voters may get the final say on whether the state expands background checks on gun sales, as proponents said Tuesday a public vote was necessary to move the idea forward.

Rep. Jamie Pedersen, D-Seattle, said the referendum proposal was necessary in order to secure enough votes to pass the measure out of his chamber. If the measure is approved in both chambers, Pedersen said he expects the National Rifle Association leads an effort to stop it.

“I feel a pretty good amount of confidence that it works and that we can defend it at the ballot box,” Pedersen said.

Under the bill, people who already have proper law enforcement credentials or a valid concealed pistol license would already have the proof needed to complete a private gun purchase. Those who don’t have such documentation could go to a licensed gun dealer or local law enforcement agency, then pay a fee and get a background check.

Hope, a Seattle police officer, has expressed concern that criminals are bypassing the current system of background checks and acquiring guns through private transactions. He said the proposal won’t stop gun violence but would make it harder for criminals to get weapons.

The state House is expected to take up the plan Tuesday afternoon. It would then have to get through the state Senate, including a committee controlled by gun-friendly lawmakers. 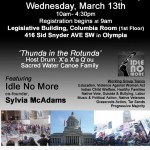