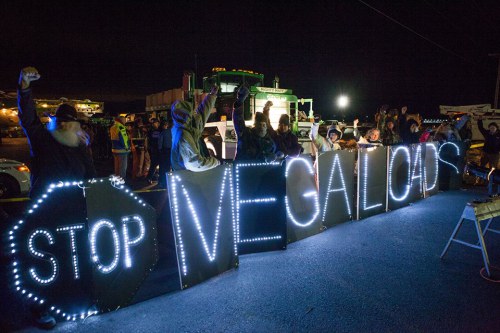 Christina Marfice of the Argus Observer

VALE—With the last of three Omega Morgan megaloads poised at the Port of Umatilla, waiting out winter weather before beginning its crawl across the state, several agencies have filed a court action seeking to halt it.

Peo Peo Mox Mox Chief — Headman of the Walla Walla Tribe Carl Sampson and ActOnClimate’s Peter Goodman filed a “petition for review of agency decision” Tuesday, alleging that the Oregon Department of Transportation failed to meet what they say is a legal obligation to determine whether the permit it issued last week for the megaload’s travel “serves the public interest.”

“The position of Sampson and Goodman is that these megaloads are not ordinary vehicles to be permitted on Oregon scenic highways using routine practices established for normal oversize loads, but that they are extraordinarily large industrial loads (longer than a football field and weighing up to 900,000 pounds), causing substantial harm to the citizens of Oregon and therefore not in the public interest,” reads a press release describing the action. “At the very least, they argue, ODOT should not be making a unilateral decision without a process for hearing public comments on whether these megaloads are in the ‘Public Interests.’”

ODOT spokesman Tom Strandberg said he sent out news releases about the megaloads, and ODOT visited the Umatilla Tribe. But he said he was not sure what else was done as far as outreach. He said public hearings are not part of the permitting process. But according to Monte Grove, ODOT’s Region 5 manager, ODOT is rethinking its process for public involvement in regards to permitting megaloads because they are getting bigger and bigger.

“And now here we are, in the middle of winter, with no formal notification, no Tribal consultation, no information to our Tribal members at our monthly council meetings that not one, but three monster megaloads are coming onto our ceded boundary lands,” Sampson wrote in a statement.

“Why did the Oregon Department of Transportation allow a variance permit of such magnitude on our sovereign and inherent Treaty rights, allowing interruption into our ceremonial, cultural, social and spiritual homelands without regard to the importance to our people?”

Omega Morgan adjusted its shipping route last year after a court ruling prohibited the Hillsboro-based shipping company from using Idaho’s Wild and Scenic River Corridor for megaload transport. Its circuitous route takes it from Umatilla to Pendleton, south on U.S. Highway 395 to Mount Vernon and east on U.S. 26 to Vale where it turns onto Clark Boulevard. It proceeds south to Highway 201 into Idaho near Homedale, then through Montana and into Canada, where its loads are bound for the tar sands oil fields in Alberta.

Christina Marfice is a news reporter at The Argus Observer. She can be reached at (541) 823-4822 or by emailing christinam@argusobserver.com. To comment on this story, go to www.argusobserver.com.