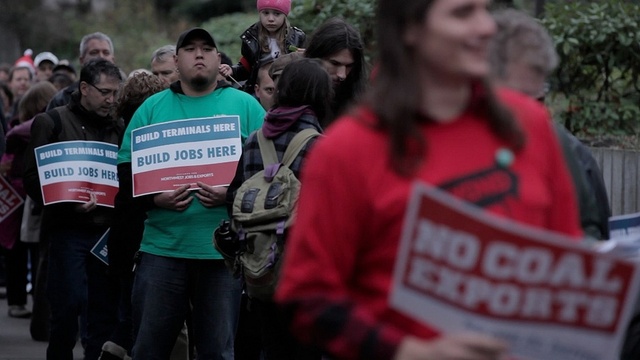 A new DHM Research survey of Northwest residents finds that support for coal exports through the Northwest is up from where it was last year, when the issue was the subject of public debate and news coverage. | credit: Heidi Nielsen/GoodWorks

More people in the Northwest support coal export terminals than oppose them. Those are the results of a new survey. But people who took the survey didn’t feel very strongly about why they supported coal exports.

For the third year in a row, a public opinion poll for EarthFix asked Northwest residents how they felt about transporting coal through the region. That coal would then be exported to Asia.

“These arguments aren’t quite as persuasive as they were in the past. Maybe people are becoming a little bit more cynical, they’ve heard them before, or they’re asking some questions, or the landscape has changed on the issue,” Horvick said.

The survey also found many people aren’t paying close attention to the issue, Horvick said, another possible reason they don’t feel very strongly about why they support coal export terminals.

One survey respondent who felt strongly about opposing coal export terminals was Robert Schuman. The Pullayup, Washington, resident is a 32 year old truck driver. He said he’s not necessarily opposed to coal, but he doesn’t like it being shipped to Asia.

“I don’t like the coal going over there mainly because they don’t have any environmental controls. It’s getting pumped out in the air over there without even basic scrubbers or anything like that. It’s just pumping ash in the air,” Schuman said.

Environmental groups look at less intense support as good news to their cause. They say as people learn more about coal exports, they start to support them less.

Kerry McHugh, Washington Environmental Council spokeswoman, said exporting coal would harm communities along the railroads and where terminals are built.

“It just really starts to add up that it’s not worth it,” McHugh said.

Over the past three years surveys have shown public support for exporting coal dipped as state agencies hosted large meetings and reviews about the terminals.

Fewer meetings took place this year. Support has risen. Opposition has stayed about the same.

Kathryn Stenger is with the Alliance for Northwest Jobs and Exports. The industry-backed group supports coal terminals.

She says one of the main reasons more people are supporting coal exports:

“It’s trade-related jobs in Washington State that are at stake here,” Stenger.

The survey had a margin of error of 2.8 percent.

There are now three proposed export terminals in the Northwest.

American Indians and others who oppose the southern leg of the Keystone XL pipeline have lost their last legal battle, enabling TransCanada to finish the project by year’s end.

While the northern part of the Keystone XL pipeline has been held up by controversy, the protests against the southern portion, known as the Gulf Coast Pipeline, have been to no avail. On October 9 a split federal appeals court upheld a lower court’s refusal to stop the pipeline’s construction because an injunction to stop construction, which is what the opponents sought, “would cost [TransCanada] at least hundreds of thousands of dollars per day,” the U.S. Tenth Circuit Court of Appeals said in its ruling.

TransCanada has already spent at least $500 million on the 485-mile pipeline, which is expected to transport 700,000 gallons of crude oil daily from Cushing, in central Oklahoma, to Gulf Coast refineries.

The controversial Keystone XL extends through Sac and Fox territory. Other Oklahoma tribes that have spoken out about the pipeline’s impact on tribal patrimony include the Caddo, Choctaw, Southern Ponca and Pawnee, though none is party to the lawsuit.

The southern XL extension was formerly part of the full TransCanada XL pipeline, traversing some 1,700 miles of western and Midwestern states in its transnational route from Canadian tar sands, but vigorous opposition from Indian people, especially in northern areas, has delayed approval of the full section. The northern part must be approved by the U.S. Department of State, because it crosses an international line between Canada and the United States. The southern leg, purely domestic, was able to go ahead, despite a lack of thorough environmental reviews.

The Sierra Club and other plaintiffs had sought an injunction against the U.S. Army Corps of Engineers, which had signed off on numerous permits so that TransCanada could move ahead. TransCanada proceeded even though the Corps had to issue 2,227 permits for water crossings, with minimal environmental review.

“Considering the number of permits issued by the Corps relative to the overall size of the Gulf Coast Pipeline, it is patently ludicrous for appellees to characterize the Corps’ involvement in the subject project as minimal, or to maintain that the Corps’ permitting involves only a ‘link’ in the Gulf Coast Pipeline,” said dissenting District Judge William Martinez in the October 9 Tenth Circuit ruling.

But the other two members of the three-justice panel in the federal appeals court, Circuit Judges Paul Kelly and Jerome Holmes, both said that financial harm can be weighed against environmental harm and in certain circumstances outweigh it.

The Sierra Club had alleged violations of the National Environmental Policy Act (NEPA), Clean Water Act and Administrative Procedures Act and contend that the pipeline constitutes a “major federal act” that requires NEPA analysis leading to a “hard look” at possible impacts.