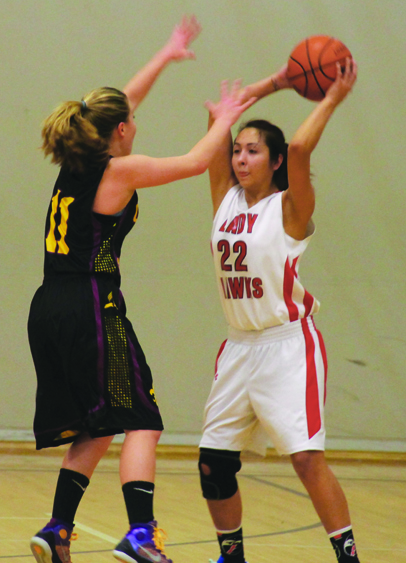 Shaelynn Sanchey looks to pass the ball in the opening possession for the Lady Hawks.
Photo/Brandi N. Montreuil

The Tulalip Lady Hawks (0-5) hosted the Orcas Christian Saints (2-1) on December 16, 2014. Coming off a narrow defeat to archrival Lummi in a previous game, the Lady Hawks were looking to rebound with their first win of the season.

Coach Cyrus “Bubba” Fryberg and his Lady Hawks would have their work cut out for them as they would be playing with only 5 eligible players, meaning no bench and no substitutions for the already thin roster.

The 1st quarter got off to a rough start for the Lady Hawks as the Orcas Christian Saints played a full court press defensively the first several possessions that resulted in consecutive turnovers by the home team. To make matters worse, the Lady Hawks looked slow and lethargic while not hustling to rebounds. Because of the lack of energy the Saints collected 5 offensive rebounds on one possession. With 3:00 remaining in the opening quarter the Lady Hawks found there hustle and looked like they were ready to play for real. There was an offensive focus to get the ball to the Lady Hawk bigs Nina Fryberg and Jaylin Rivera. Both were able to get into good offensive position and get off clean shots, but they didn’t fall. The 1st quarter ended with the Lady Hawks trailing 0-11.

Following the lackluster 1st quarter showing, Coach Fryberg urged his players to push the tempo offensively and for the guards, Michelle Iukes and Myrna Redleaf, to be more aggressive while looking for their shots. After giving up a quick bucket to go down 0-13, the Lady Hawks buckled in defensively to force back-to-back turnovers. Michelle Iukes showed her coach the aggression he was looking for by pulling down an offensive board and getting fouled on the put-back attempt. Michelle went one for two at the free throw line to put the Lady Hawks on the board 1-13. On the very next possession Myrna found a wide open Michelle who swished in a 3-pointer. Moments later Myrna forced a Saints turnover and Coach Fryberg called a timeout. He drew up a play that was executed to perfection and resulted in Michelle hitting another 3-pointer. The Lady Hawks were on a 7-0 run and brought the score to 7-13. The Saints responded by hitting a 3-pointer of their own, followed by a Nina Fryberg free throw and a baseline jumper by Michelle. With the score now 10-16 the Saints called a timeout.

Coming out of their timeout, the Saints ran a defense that this basketball enthusiast hadn’t seen before. Later I learned it was called the diamond press or 1-2-1-1 full court press. It’s a trapping man-to-man defense that only works if you have quick guards who can “heat up the ball” in a one-on-one situation. This means getting the ball handler out of control and blinding him from the impending trap, which comes from a secondary defender who’s lurking near half-court. For the remainder of the 2nd quarter, the Saints remained in their diamond press defense and the Lady Hawks committed eight turnovers while not scoring another point. At halftime the Lady Hawks trailed 10-24.

The Saints’ diamond press defense continued to stifle the Lady Hawks in the 3rd quarter. Following back to back turnovers, Myrna found an open Michelle who shot and made her third 3-pointer of the game to make the score 13-26. Over the remainder of the 3rd quarter the Lady Hawks would only score two more points, scored by Jaylin Rivera, as the Saints defense continued to slow down the visibly frustrated Lady Hawks. Meanwhile the Saints were getting easy buckets off of 14 forced turnovers. Going into the 4th quarter the Lady Hawks trailed 15-41.

After getting the short break to rest before the start of the 4th quarter the Lady Hawks came out hustling. They were running back on defense and not letting the Saints take uncontested shots. On offense the shots weren’t following until Michelle inbounded to an open Jaylen who made an elbow jumper to make the score 17-41. Unfortunately for the Lady Hawks that would be their last basket of the game as Jaylin soon after fouled out. Having no bench players for this game meant the Lady Hawks would play the rest of the game 4-on-5. This added challenge made it difficult to get any offense going. The game ended 17-49 in favor of the Orcas Christian Saints.

Following the game Lady Hawk Michelle Iukes was very upbeat about the team’s development. “We’ve gotten a lot better at beating the press. We didn’t panic or anything. But we have to look middle more because they [Jaylin and Nina] are open. I think everyone has improved and we are able to look inside more, down low more and not just high post.”

The Lady Hawks remain positive and are determined to get their first win on the season in the coming weeks. 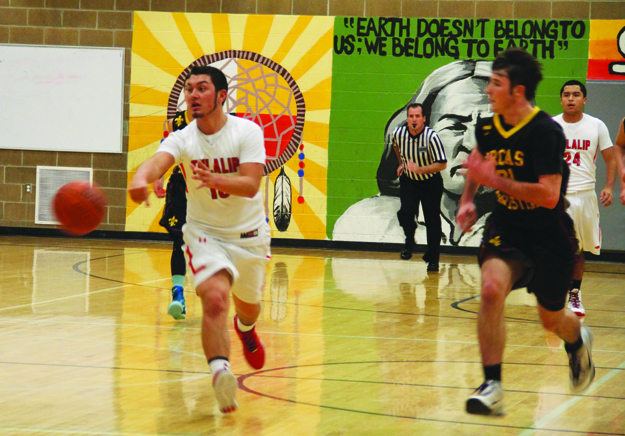 The 2-1 Heritage Hawks hosted the 1-2 Orcas Christian Saints on December 16, 2014. The Hawks were looking to rebound from their first loss of the season, falling to Lummi Nation 55-79. Senior guard Ayrik Miranda was making his home debut vs the Saints and inserted into the starting lineup.

The 1st quarter got off to a rocky start as the Hawks failed to connect on their first four shots, while the Saints started off 3-3 from the field to take an early 7-0 lead. Two minutes into the opening quarter Center Robert Miles was fouled while shooting and subsequently made a free throw to put the Hawks on the board, 1-7. The Saints responded by converting two free throws of their own to take a 9-1 lead. That would be the largest lead of the game by the Saints as the Hawks got their offense going. The Hawks spread the floor offensively and focused on moving the ball from player to player. Over the next 3:00 of game play the Hawks stellar ball movement resulted in an 8-0 run to tie the game at 9-9. The Saints responded with a 7-0 run of their own, taking advantage of offensive rebounds on four straight possessions, to take a 16-9 lead. In the Hawks closed the quarter on a 4-0, scoring two straight transition buckets. At the end of 1 the Hawks trailed 13-16.

The Hawks carried their momentum into the 2nd quarter by scoring two quick buckets to take their first lead of the game, 17-16. Making his home debut in fashion, Ayrik was in the midst of scoring 10 straight Hawk points. Both teams traded baskets until the Hawks called a timeout with 5:16 remaining in the half, with the Hawks trailing 24-25. Ayrik and Trevor Fryberg hit back-to-back 3-pointers and Willy Enick hit an elbow jumper to put the Hawks up 31-29, leading to a Saints’ timeout. Following the timeout Aryik hit another 3-pointer to give the Hawks their largest lead of the game, 34-29. To this point Ayrik was on fire having scored 14 points in the quarter and 18 of the last 25 points scored by the Hawks. The initial defense of Hawks was forcing the Saints to take contested jumpers, but because the Hawks weren’t boxing out the Saints’ bigs were getting easy putback baskets. The offense continued to flow regardless, and Jesse Louie found his range hitting a 3-pointer and Willy Enick hit an elbow jumper to extend the Hawks lead to 44-36 at halftime.

Coach Cyrus “Bubba” Fryberg used the halftime intermission to motivate his Hawk players to improve their defense play. “Defensively we are being outhustled. They have gotten way too many rebounds and they are scrapping to go get the ball. Why? Because we are playing lazy. We have to play harder, box out more, and hustle after the ball,” Fryberg told his players.

With the defensive intensity turned up, the Hawks came up with two steals during a 7-0 run to open the 2nd half to push their lead to 51-36. Both teams would alternate scoring baskets over the next several minutes, all the while the Hawks maintaining a double digit lead. That is until they committed four turnovers in the final 1:30 of the 3rd quarter. The turnovers proved costly as the Saints converted them into buckets, closing the quarter on a 6-2 run. Going into the final quarter the Hawks lead was down to 8 points, 59-51.

The Hawks began the 4th quarter with the same defensive mindset their coach instilled in them at halftime. They forced six straight Saints turnovers to hold the Saints scoreless three minutes into the final quarter. Capitalizing on their defense and getting timely offensive rebounds and putback layups by Enick the Hawks were on a 6-0 that pushed their lead to 65-51 with 5:06 left to play. Seeing enough of his team committing turnovers the Saints coach called a timeout to have his team regroup. Following the timeout the Saints put their offense in the hands of their point guard Michael Harris. He drove to the basket aggressively on the next six Saints possessions, scoring two buckets and coming away with four made free throws. On the other end, the Hawks continued to move the ball well and were scoring at the rim. With 3:00 to go the Hawks led 70-59. Saints’ Michael Harris again drove to the rim scoring another bucket; he had scored the last 10 Saints’ points. The Hawks continued to score off their offense sets and adjusted defensively by packing the paint to stop the Saints’ point guard from driving to the hoop. When the game was over the Hawks were now 4-1 on the season as they beat the Saints 76-63. 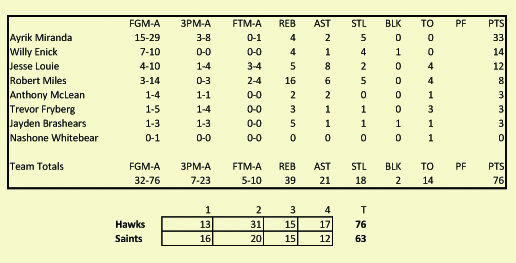