For centuries, Native Americans from Boise to Wenatchee to the southern Oregon coast have harvested Pacific lamprey, colloquially called eels. The ugly-looking critter resembles an eel, but it is actually a primitive fish with a distinctive, toothy suction cup mouth.

Willamette Falls, just outside Portland, is one of the few remaining places in the Northwest where it is possible — and legal — to catch Pacific lamprey for personal and ceremonial use. Tribal members are about the only ones who go for it.

During a “blessing ceremony” for lamprey and fishermen held at the confluence of the Willamette and Clackamas Rivers Monday, tribal schoolchildren led an eel dance, a sort of snaking Conga line more than 50 strong of all ages.

One of the fishermen there, Patrick Luke, is a Yakama Nation biologist. Luke is still miffed about the ticket he received from Oregon Fish and Wildlife police at the nearby falls in 2011.

“Now they have got folks on the reservation that won’t even come down here because they are afraid that enforcement will intimidate folks like they did in the past,” Luke said. “I grew up living that way in the 1970s seeing the state policemen treat the Indian folks really bad.”

Three years later, the Yakama Nation is still fighting Luke’s ticket. Two other fishermen were also cited and had their catches seized that day for fishing without a state permit. The thing is, Oregon does not “co-manage” lamprey the same as salmon or game.

“It is not a treaty right,” State Police Captain Jeff Samuels explained. “It is definitely open to all,” with everyone under the same rules, he said of the state’s approach.

From the tribal point of view, they believe they shouldn’t need the state’s permission.

“They don’t set our seasons,” Luke said. “We have our own law enforcement that sets our own seasons.”

At Oregon’s Department of Fish and Wildlife, fishery managers are trying to finesse the issue so it doesn’t escalate. The department’s Tony Nigro said his agency is trying to reach an understanding that at least clarifies the rules.

“The state has its policies and its legal positions,” Nigro said. “They aren’t necessarily in agreement (with tribal positions) at this point in time. But we respect and recognize the differences. I think we’ve been fairly good at putting those differences aside, seeing if we can work cooperatively.”

Nigro said Northwest states, tribes and the federal government have a common goal to keep Pacific lamprey off the endangered list. Populations of the migratory fish have declined dramatically in recent decades. The reasons are many including dams and water diversions. Lamprey have trouble swimming up fish ladders designed for salmon. However, both sides see room for a limited ceremonial and subsistence harvest within a larger recovery effort.

Evaline Patt, a Warm Springs tribal council member, said lamprey used to be a staple in the diets of Columbia and Snake River basin tribes.

Patt compared lamprey to oysters. Others said it tastes like fishy steelhead. 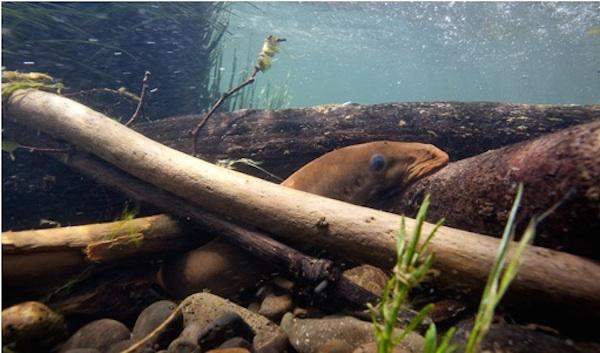 The Pacific lamprey, culturally significant to the Umatilla and other tribes, now has a shot at making it past the McNary Dam to spawn.

The U.S. Army Corps of Engineers is supplementing the fish ladder of the dam’s Oregon shore with an additional structure that offers water velocities more conducive to lamprey migration, the Union-Bulletin reported on March 8.

The structure would allow lampreys, which tend to move along the river bottom in water that flows more slowly than the upper levels preferred by spawning salmon and steelhead, to access the fish ladder and make it upstream, the Union-Bulletin said.

“We plan to conduct video monitoring to observe which velocity is preferred by migrating lampreys,” said Mark Smith, who managed the project for the Corps, to the newspaper. “We anticipate this prototype structure will help us learn quite a bit about what’s best for lamprey passage.”

Lampreys have been around for at least 450 million years, the oldest fish in the Columbia River system, according to the Columbia River Inter-Tribal Fish Commission (CRITFC). Though not in danger of extinction, they have declined from a former high of millions 30 years ago to just about 4,000 returning to the Snake, Clearwater and Salmon river drainages where they once teemed, said Aaron Jackson, lamprey project leader for the Confederated Tribes of the Umatilla Indian Reservation, to the Union-Bulletin.

Tribes in the Pacific Northwest use the lamprey for food and medicine, and the fish plays a key role in regulating inland aquatic systems. They spend their first four to seven years of life acting as filters in freshwater sand and silt, then move to the ocean where they become parasites, latching onto various saltwater prey, the Union-Bulletin said. After two to three years of that they return to their freshwater origins to spawn.

The Army Corps of Engineers work group that helped design and engineer the structure included tribal representatives, the newspaper said. Built by Marine Industrial Construction of Wilsonville, Oregon under a $336,542 contract, was completed in late February and is the first such installation in the mid-Columbia River, the Union-Bulletin said.

“We’re excited to see something like this put in the river,” Jackson said.