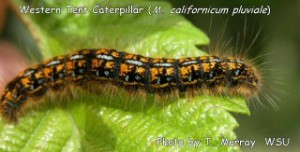 The Western tent caterpillar’s (Malacosoma californicum pluviale) body is dark with spots of white, orange and blue. White and orange-yellow tufts of hair poke out from each segment.

By KIE RELYEA — THE BELLINGHAM HERALD

Wiggling masses of white-orange-and-black caterpillars are emerging from their silken nests to munch on tender leaves – signaling a second spring when Western tent caterpillars might be out in big numbers.

“I have seen them out. They’re not as bad as last year. What I’m guessing is we’re getting a resurgence of a population that peaked last year,” said Chris Benedict, agriculture agent at the Washington State University Extension office in Whatcom County.

“Though they’ll be out, they’ll be less of an issue than last year,” he added.

The native caterpillars are considered a nuisance but largely harmless. They are the larvae form of brown, stubby-looking moths that will emerge from cocoons later in June or July to mate and lay eggs.

The caterpillars hatch from eggs over-wintering on tree branches. Once they hatch, they start eating.

They prefer the foliage of most deciduous trees and shrubs such as alder, roses and fruit trees.

And while the hungry caterpillars put a visible dent in the surrounding greenery – which people find unsightly, along with the masses of worms – they usually don’t kill the healthy trees they feast on, according to gardening experts.

But small trees might not be able to recover from such defoliation.

The WSU Master Gardener program has been fielding questions from the public.

“We’ve been seeing folks bring in some young tent caterpillars wanting to know what they are and what to do about them,” said Beth Chisholm, master gardener and coordinator of the Community First Garden Project through WSU Extension.

She said people shouldn’t be “too alarmed.”

If people want to get the caterpillars off their fruit trees, Chisholm recommended they cut off the infested branch, put it in a bag, tie it up and put it in the garbage.

• Insecticides are discouraged. Unless trees are already weak, tent caterpillar damage isn’t permanent; trees will grow new leaves after the caterpillars have left. Poisons also can kill beneficial insects, including those that attack the caterpillars.

• Since 2012 was a big year for tent caterpillars, they could return in large numbers again this spring. This fall or winter, pick out and destroy the moth’s eggs, which appear in foamy, gray, half-inch cases around twigs and on tree trunks.

• Strip or prune out the tent-like nests found at the end of branches as soon as they appear. Remove the nest in the early morning or evening, when most of the caterpillars will be inside.

• Learn more by going online to whatcom.wsu.edu and typing “tent caterpillars” into the search window.