Cultural Exchange between the Suquamish Tribe and El Nido, Palawan, Philippines focuses on cultural heritage, and sustainable fishing and archaeology 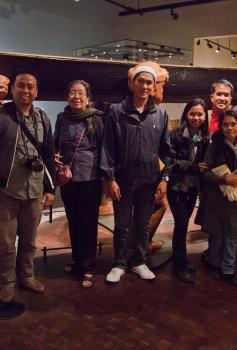 Seattle – This week, seven representatives of the Suquamish Tribe are in the Philippines. Over the course of eight days, they will visit communities on Palawan Island and learn about the archaeological history of the island, as well as its modern day challenges to preserve natural resources in the face of tremendous growth in both tourism and development. The visit is part of “Ancient Shores, Changing Tides,” a project that is part of the Museums Connectsm program, an initiative of the U.S. Department of State’s Bureau of Educational and Cultural Affairs that is administered by the American Alliance of Museums.

The Suquamish delegation’s trip to the Philippines follows on the heels of a visit seven heritage enthusiasts from the Philippines made to Seattle and Suquamish this past October. During their eight-day stay in Washington, the Filipino delegates learned about museum curation and collection practices through guided tours of several museums in the region: the Burke Museum, Wing Luke Museum, Suquamish Museum, and the Makah Museum and Cultural Resource Center.

In addition to comparing their community museums, the ways in which their heritage is preserved, and local efforts to attract tourism, the Filipino and Suquamish groups are also comparing their fisheries management practices. The Filipino delegates were able to go out with Suquamish Seafoods divers to see geoducks being harvested. When they visit El Nido, the Suquamish delegates will travel through a community-managed marine protected area to see how those practices are helping fish stocks to recover in an area threatened by dynamite fishing, overfishing, and climate change.

The sustainable fishing component has led to some rather delicious opportunities. At a traditional foods feast held at the House of Awakened Culture in Suquamish, more than 200 people gathered to enjoy a feast featuring locally-harvested geoducks, salmon and Manila clams. On Palawan, the delegates will be able to taste grouper, dolphinfish, anchovy, squid, crabs and more. There, locally harvested fish, seafoods, shellfish, and seaweeds will all be prepared according to traditional Cuyonon techniques.

With this trip coming in the wake of super typhoon Haiyan, there is certain to be a lot of discussion between the groups about recovery efforts—and how to build communities that are more resilient to the effects of climate change.

When the Filipino delegates rode the Bainbridge Island ferry back to Seattle from Suquamish, they witnessed something few Seattleites have been lucky enough to see: orcas in south Puget Sound. These majestic animals had also accompanied the ferry that was carrying Suquamish artifacts from the Burke Museum to the new Suquamish Museum the day before. Perhaps the delegates from Suquamish will be lucky enough to see a manatee – known locally as a dugong – make a rare appearance while they travel El Nido’s waters.

“Ancient Shores, Changing Tides” is one of ten Museums Connectsm programs taking place throughout the country this year. The mission of the Museums Connect program is to strengthen connections and understanding between people in the United States and abroad through innovative, museum-based exchanges that address critical needs or timely issues in museums’ local communities and help museums better serve the public.