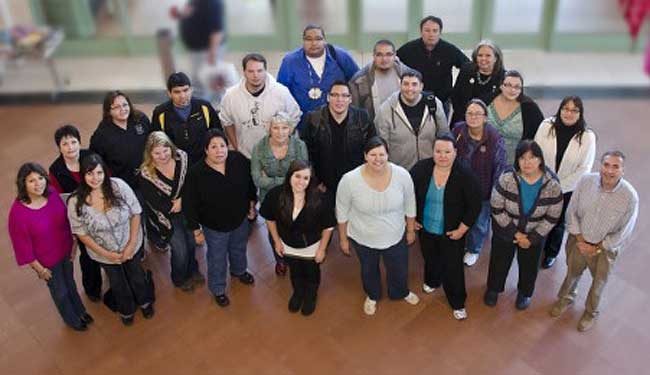 “This was a unique opportunity for me to get a kind of a crash course in what are the nuts and bolts that go behind running a tribe on a daily basis.”

In two years he has put 40,000 miles on his car to make 20 weekend trips from Kyle, S.D. to the University of Minnesota Duluth for meetings that compliment online classes.

Brown Bull, who lives on the Pine Ridge Indian Reservation, works for his tribe’s education agency. He’s one of 22 graduates in UMD’s Master of Tribal Administration and Governance program, the first of its kind in the nation.

“It’s a 12-hour drive for me. We had class Friday night at 6. I’d leave Kyle at 5 a.m., get there,” he said. “We had class Saturday morning and afternoon until 3. Then I’d turn right back around and head back.”

The new graduates, who are their 20s through their 60s, come from reservations around the Midwest to study at UMD, which developed the program at the behest of area tribes, to prepare leaders for the unique management challenges tribes confront. Most already work for tribal governments, including three executive directors of Indian tribes.

Johnson, a member of the Bois Forte band of Chippewa, brings a long history working in Washington on policy related to Indians. He has also directed the U.S. House subcommittee on Native American Affairs, and headed the National Indian Gaming Commission in the Clinton administration.

The master’s program is combines elements of a public administration and a business management degree, Johnson said. It grew out of two years of consultation with tribes around the region.

“They didn’t really want to take an academic approach,” he said. “They wanted to know, ‘what are the best practices for us to run a reservation?’

“They wanted courses in federal Indian law and policy and tribal sovereignty and leadership and ethics. They wanted to know … the best practices with regard to tribal accounting, finance, budgets.”

Reservations can be incredibly complex places to govern and do business. They’re sovereign nations with a complex relationship with the federal government, and, Johnson said, a host of unique laws that apply only on tribal land.

“It takes a long time,” he said, to understand them. “There’s a big learning curve on the reservation.”

Johnson knows that first-hand. After receiving his law degree from the University of Minnesota in the 1980s, he worked for the Mille Lacs Band, eventually becoming the band’s solicitor general.

“There’s usually two or three people, I found, that had been around 20 or 30 years who you could go ask how things worked,” he said. “So everybody would learn from those one or two or three people, and then there would be a tribal election, and people might get wiped out, and you’d have to start over again, sometimes those people would not be kept on, and then you’d be in big trouble.”

With the master’s program, Johnson hopes to train a group of people who can go to any reservation around the country and bring some expertise with them.

Lea Perkins, executive director of the Red Lake Nation in northwest Minnesota since 2004, said she began to apply what she learned in class right away at her job.

“One of the main things was the law class, federal law,” Perkins said. “I started seeing that immediately, in tribal council meetings. They would talk about a law and I was already starting to learn about that.”

A long-term goal of the UMD program is to nurture future tribal leaders. At 31, Joe Nayquonabe is already commissioner of corporate affairs for the Mille Lacs band, and helped broker a recent deal to purchase two large St. Paul hotels. But he enrolled in the program, immediately after receiving an MBA, because he would like to run for tribal office some day.

“This was a unique opportunity for me to get a kind of a crash course in what are the nuts and bolts that go behind running a tribe on a daily basis,” he said.

Brown Bull hopes to become the chairman one day of the Oglala Sioux Tribe. He worries that his current leaders aren’t as prepared as they could be.

“We just had elections in November, and twelve of our council people are brand new, never been in tribal government,” he said. “And sad to say, of the 19 council people, six are the only ones who have a college education.”

He’ll be awarded his masters degree from UMD at 7 p.m. today.