By John Dodge, The Olympian

Pink salmon, Puget Sound’s smallest, most short-lived and most abundant of five native salmon species, are returning in record numbers to the Nisqually River.

There are so many of these 3- to 7-pound fish stacking up in the river, it conjures up the old saying: “They’re so thick, you could walk across the river on their backs.”

They aren’t quite that thick, but they are pulsing upstream to spawn in numbers that boggle the mind. More than 700,000 pinks are expected to enter the river this year out of an estimated Puget Sound run size of 6.2 million fish.

Flash back 10 years and tribal biologists were hard-pressed to find pink salmon in the river at all.

What gives? The first phrase out of the mouths of fish biologists is: “good ocean survival.” But that’s a catch-all phrase that might not tell the whole story.

A little more about a pink salmon’s life history: A pink salmon migrates to saltwater shortly after it emerges from the gravel as a fry salmon. They quickly make their way through Puget Sound to ocean waters.

They live only two years, returning to spawn in odd-numbered years. By comparison, the four other species of Pacific Northwest native salmon – chinook, coho, sockeye and chum – live three years or more in fresh and salt water.

So pink salmon live the simplest of lives – less time exposed to pollution, predators and harvesters.

So while marine scientists puzzle about why the more prized salmon such as coho and chinook experience disturbingly low survival rates in Puget Sound, the pink salmon seem to be growing in abundance and geographic reach.

“Their ocean survival has been phenomenal, but their simple life history may be playing a role in the increase,” Nisqually tribal natural resources manager David Troutt said. “Meanwhile the more complex species in Puget Sound are struggling. It’s a potential indicator that Puget Sound is becoming a simpler ecosystem, which should be a source of concern.”

While Nisqually sport and tribal fishers are taking a small share of the large pink run, the vast majority of the fish are being passed upstream to spawn. A tribal fish weir was installed in the river primarily to sort through chinook salmon to keep hatchery chinook from swimming upstream to interfere with naturally spawning chinook. But it has been dominated by pink salmon the past two weeks.

“We’re passing 200-plus pinks upstream every 10-20 minutes,” said Tom Friedrich, an intern with the Nisqually River Foundation, and part of the crew working at the fish weir near the tank crossing on Joint Base Lewis-McChord.

An occasional chinook salmon is found mingling with the pinks. However, it appears the chinook are waiting for the pinks to move upstream first, Troutt said.

The chinook might have to wait. As of Wednesday morning, more than 90,000 pinks had passed upstream, and they show no sign of letting up.

The 2013 pink run on the Nisqually is the source of extra work at the in-river fish trap, but no one seems to complain.

“It’s a lot of work, but it’s really fun to see all these fish,” St. Jean said, pointing at the mature male pinks distinguished by their humped backs, thus the nickname humpy.

The pink salmon, which die in the river shortly after spawning, are also returning valuable marine nutrients to the river watershed.

“I think we’re all glad to see the increased numbers of pink salmon,” said Lance Winecka, executive director of the South Sound Salmon Enhancement Group, a nonprofit working on habitat restoration projects. “They are a source of marine nutrients that South Sound river systems have been short on for several decades.”

In addition, the pink fry moving out of the river into saltwater in the spring provide food for young coho salmon, Troutt said.

Roy Wells, a tribal fish commissioner with a long history around the river, said he can’t remember seeing healthy pink salmon runs on the Nisqually since the 1970s. Tribal elders talk about prolific runs 60-70 years ago, St. Jean said.

“My mom used to fry them up – they’re good to eat,” Wells said. But first, she would trim the hump off the backs of males because they are full of fat, Wells said.

Wells on Tuesday hauled about 400 pounds of pink salmon to a cannery on Yelm Highway operated by Faith Harvest Helpers, a faith-based nonprofit that cans pink salmon for shipment overseas with other food and medical supplies to disaster-stricken countries,

“We hope to do a whole lot of pinks this year,” said Richard Norton, the faith group’s vice president.

Troutt said tribal officials are starting to talk about new ways to utilize pinks if they keep coming back in big numbers every other year.

By Mike Benbow, The Herald 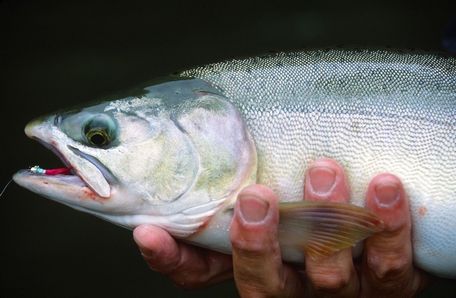 Photos by Mike Benbow / For the Herald
Pinks like to travel close to shore, so fishing for pink salmon is a great family sport.

If you or a member of your family have always wanted to catch a salmon, now is your best chance.

The sheer numbers of pinks will up your odds of success either in the Sound or in the local rivers.

If you’d like to make catching a pink a family project this year, here’s some information that might help. Fishing should be good now and for the next few weeks.

More than any other salmon, pinks like to travel close to shore while heading to their home rivers, so fishing from the beach is an effective way to catch them in salt water, especially if you don’t have a boat.

Whether in a boat, on a beach, or on a river bank, look for pinks jumping and rolling as a sign of where to cast your lure or fly.

Rivers: Stillaguamish, Snohomish, Skykomish. Tip: the fish are in better eating condition if you fish closer to salt water.

Pinks deteriorate quickly, but they are good table fare if cared for properly.

After catching a pink, remove the gills and let the blood drain out of the fish. You can filet them later. Put on ice right away. Eat the fish in the next day or so.

Pinks are an oily fish, so they work well on the smoker. But they also can be tasty on the grill.

Fillet the salmon and add some lemon juice, fresh cracked pepper and some butter.

Cook on the grill at about 375 degrees for 18 to 20 minutes. Much of the oil will drip off the salmon onto the grill, adding a smoky taste.

I consider pink marabou jigs to be the most effective lure for pinks in both salt and fresh water. You fish them by jigging the rod up and down while reeling in your line, creating an erratic action that is often irresistible to fish.

Jigs are also easy to make and the materials are available at the same locations. Here’s how:

You will also need a pair of sharp scissors and some sort of tying vise. Fly-tying vises are expensive, so you can use a regular woodworking vise in your workshop, pliers or vise grips if you’re just going to make a few.

2. Attach thread to jig collar by wrapping it over itself a few times.

3. Stroke tip of entire marabou feather and cut so it extends from the head of the jig to about 3/4 of an inch past bend of hook.

4. Tie cut end in at jig collar with several wraps of thread.

6. Wrap thread repeatedly over cut edge of feathers to produce a neat collar below jig head. Tie off thread with three half hitches and cut end with scissors.

Rods: Use a medium weight spinning rod or a 5- to – weight fly rod, either should be about 9 feet long.

Line: Line or leader material should be 8- to 12-pound test.

Lures: Pink Buzz Bombs, 2.5 inches long, or Rotators, or a 1/4-ounce pink marabou jig. Fly fishers can use pink clousers in the Sound and a pink woolley bugger in the river.

2 The lifespan in years of a pink salmon, which spawns in most Washington rivers in odd-numbered years.

3-5 The weight of a pink salmon in pounds. Pinks are the smallest of the five species of Pacific salmon.

18-24 The average length of pinks in inches.

409,700 The number of adult pinks expected to spawn in the Stillaguamish River this year based on a count of the young fry that left the river two years ago.

988,621 The number of pinks expected this year in the Snohomish River and its tributaries.

More than six-million pinks are expected to migrate into the Strait of Juan de Fuca and Puget Sound this summer, and the Cabela’s Tulalip Store at 9810 Quil Ceda Blvd. in Tulalip is hosting a pink salmon fishing seminar July 13-14.

For more information, go to www.cabelas.com/tulalip. 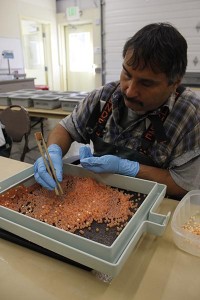 Pink salmon are the most abundant salmon species in the Northwest, but the Lower Elwha Klallam Tribe didn’t want to risk losing the Elwha River pink population with the current removal of the river’s two fish-blocking dams.

The deconstruction of the Elwha and Glines Canyon dams are part of the massive project to restore the Elwha River after nearly 100 years of blocked flows and degraded salmon habitat. One result of the project is that high levels of sediment once trapped trapped behind the dams are now flowing downriver.

“We weren’t sure how the pinks were going to be affected by the dam deconstruction activity, so we wanted to take precautions to protect them,” said Larry Ward, the tribe’s hatchery manager. “The historical population of pinks in the Elwha River was 400,000 to 600,000. The current run is 200, making it a chronically depressed stock of fish.”

While pinks have a lower commercial value, they play an important role in a properly functioning ecosystem by providing food for other animals and contributing nutrients to the watershed.

“The habitat in the lower river for pinks wasn’t great when the dams were in place, but they were using it,” Ward said.

Pinks returning to the Elwha River in 2011 were collected and spawned. The fertilized eggs were incubated at the Washington Department of Fish and Wildlife’s (WDFW) Hurd Creek Hatchery, then sent to the National Oceanic and Atmospheric Administration’s (NOAA) Manchester Research Station, where they were reared to adults. The fish, 300 males and 132 females, were then brought back to Elwha in August for spawning.