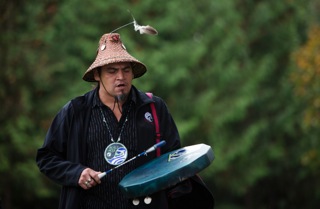 Richard J. Seward of Sto:lo First Nation and Pilalt Tribes welcomed the Washington Tribes with songs and ceremony. Chilliwack is the traditional lands of the Sto:lo people. 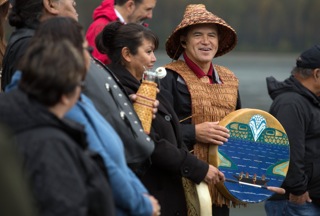 Swinomish Chairman and NCAI President Brian Cladoosby with Cultural Coordinator of the Swinomish Tribe and members of First Nations.

The Kinder Morgan proposed oil pipeline would roughly triple the capacity of the existing pipeline, from 300,000 barrels per day to 890,000 per day. It would run alongside an existing pipeline that stretches from the Alberta tar sands oil fields to an oil shipping terminal in Burnaby, B.C., a suburb of Vancouver, greatly increasing the traffic of oil tankers carrying diluted tar sands bitumen through Canadian and U.S. waters.
“The proposed pipeline, if approved, will increase the risk of oil spills and cause more disruption of our fishing fleet. The Suquamish Tribe has a duty to stand up to further threats to our Salish Sea fishing grounds, which have sustained our people since time immemorial,” said Suquamish Chairman Leonard Forsman. 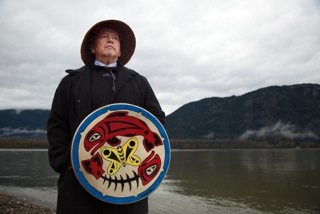 Glen Gobin, Tulalip Tribal Member and Tulalip Tribe Board of Directors Treasurer along the shores of the Fraser River after the ceremony.

“If the pipeline is approved, there will be a massive increase in tanker loadings,” said Tulalip Board of Director Glen Gobin. “This increased traffic will directly interfere with access to traditional and treaty-protected fishing areas, and put the safety of tribal fishers at risk—not to mention drastically increase the chance of a catastrophic oil spill,” he said. “My father, Bernie Gobin, fought side by side with leaders such as Billy Frank Jr. to ensure that salmon, the very essence of who we are as Coast Salish peoples, live on from generation to generation. We fight for our past and our future.“
Canada’s Coast Salish First Nations also oppose the oil pipeline, and testified before the National Energy Board last week. Those tribes included Shxw’owhámel First Nation, Tsleil-Waututh Nation, Kwantlen First Nation, Musqueam Indian Band, Peters Band. Katzie First Nation and Hwlitsum First Nation also provided testimony.
“Like the sea, Coast Salish people acknowledge no boundaries. We are united to protect the Salish Sea,” said Chemainus First Nation member Ray Harris. “It’s a danger to the environment, a violation of aboriginal fishing rights, and a threat to all people who call this unique place home,” he said.
Coast Salish peoples are the indigenous people of the Pacific Northwest, and have traditionally lived along the coasts of Oregon and Washington in the United States, and in British Columbia, Canada. The Salish Sea is a network of waterways between the southwestern tip of British Columbia and the northwestern tip of Washington State, and includes the Strait of Juan de Fuca, Haro Strait, the Strait of Georgia and the Puget Sound. 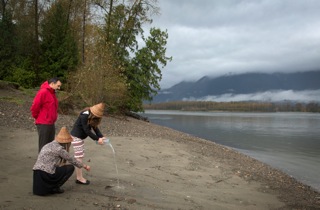