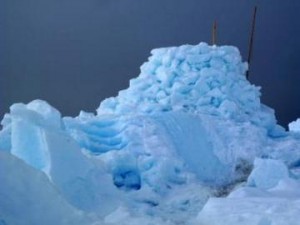 Antarctic ice, long thought to be disappearing more slowly than that of the Arctic or even growing slightly, has been sneakily melting from underneath, a new study shows.

It adds a new and alarming dimension to previous calculations of polar ice melt and the associated effects on, and causes of, climate change, said a research team from NASA and Columbia University. Scientists had previously assumed that the bulk of Antarctic ice loss occurred when chunks detached from the ice sheet and became icebergs in a process known as calving. But NASA announced on June 13 that basal melt from the underside of the ice sheet made up 55 percent of all Antarctic ice shelf mass loss between 2003 and 2008, much more than researchers expected to find.

“The traditional view on Antarctic mass loss is it is almost entirely controlled by iceberg calving,” said Eric Rignot of NASA’s Jet Propulsion Laboratory in Pasadena, California and the University of California, Irvine, in a NASA statement. “Our study shows melting from below by the ocean waters is larger, and this should change our perspective on the evolution of the ice sheet in a warming climate.”

Rignot, the lead author of the study published in the June 14 issue of the journal Science, explained that the ice sheet is not necessarily decaying, because the ice flow from the continent can make up for the loss. However, he added, there is no question that “in a number of places around Antarctica, ice shelves are melting too fast, and a consequence of that is glaciers and the entire continent are changing as well.”

The team calculated the volume lost to melt, which had not been done in the aggregate before, and compared it to the mass of the chunks that had fallen off glaciers. New uses of satellite technology and data have enabled researchers to measure the ice thickness more accurately than ever before. (Related: What Lies Beneath: Digitally Denuded Antarctic Shows Land Mass Stripped of Ice)

The Antarctic ice shelves regulate the flow of water into the ocean, the study authors explained. While it is unclear how this affects or is influenced by changing climate, there is no question that “the rate of melting is very sensitive to ocean temperature,” Rignot told National Geographic. “This places more importance on the role of the ocean. If the ocean melts these ice shelves, it will affect the ice sheets on land.”

Ocean temperatures are increasing, which makes the sensitivity worrisome, said Erin Pettit, a glacier expert at the University of Alaska in Fairbanks who was not involved in the new research. Speaking to National Geographic, where she has been named a 2013 Emerging Explorer, she said even the slightest change in current or temperature in this region can cause big reactions in the ice. (Related: Northeastern Ocean Surface Temperatures at Highest in 150 Years: NOAA)