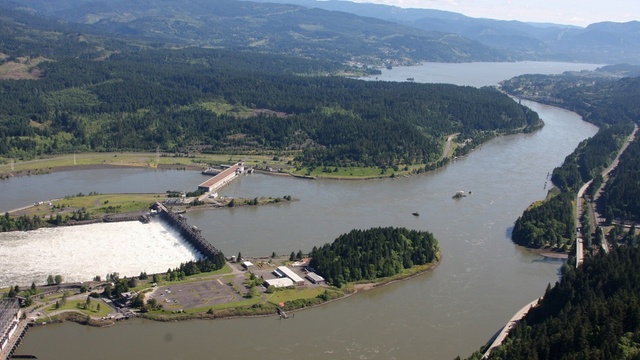 The Bonneville Dam on the Columbia River. A legal settlement requires the Army Corps of Engineers to disclose the pollution that its dams put into the river. | credit: Amelia Templeton

For the first time in its history, the U.S. Army Corps of Engineers will have to disclose the amount of pollutants its dams are sending into waterways in a groundbreaking legal settlement that could have broad implications for the Corps’ hundreds of dams nationwide.

The Corps announced in a settlement on Monday that it will immediately notify the conservation group that filed the lawsuit of any oil spills among its eight dams on the Columbia and Snake rivers in Oregon and Washington.

The Corps will also apply to the Environmental Protection Agency for pollution permits, something the Corps has never done for the dams on the Columbia and Snake rivers.

The settlement filed in U.S. District Court in Portland, Oregon, ends the year-old consolidated lawsuit by the conservation group Columbia Riverkeeper, which said the Corps violated the Clean Water Act by unmonitored, unpermitted oil discharges from the eight hydroelectric dams.

The settlement reflects the recent tack of the EPA regulating the environmental impacts of energy. The agency has recently come up with regulations of mountaintop removal for coal and fracking for oil and gas.

As part of the settlement, the Corps admits no wrongdoing, but will pay $143,000 and the consolidated cases were dismissed.

When contacted by The Associated Press, the Corps’ Northwest and national offices requested questions via email Monday and did not immediately comment on the settlement.

The settlement will allow oversight of the dams by the EPA. The agency had the authority to regulate the dams’ pollution before the settlement, but it could not compel the corps to file for a pollution permit. The Corps will also be forced to switch to a biodegradable lubricant for its dam machinery if an internal study finds that it’s financially feasible.

The Corps isn’t just a polluter, however. It’s also a regulator of pollution under the Clean Water Act. The act grants the Corps the authority to issue permits for the discharge of materials excavated from or put into U.S. waterways.

“Under the letter of the law, they have been engaged in unpermitted discharge for years,” said Melissa Powers, an environmental law professor at Lewis & Clark Law School in Portland, Oregon. “They should have long ago said, ‘This is how much we’re discharging. Here are the environmental impacts.’ “

Monday’s settlement will force the Corps’ hand. To discharge pollutants into waterways, the polluters must obtain permission from state and federal governments. Before the settlement, the EPA knew about the unpermitted discharges from the dams, but the Corps said in letters to state agencies that it is not accountable to the EPA.

The Corps argued in the same letters that disclosing the mechanical workings of the dam as part of an oil-discharge summary could compromise the dams’ security.

In July 2013, Columbia Riverkeeper sued and demanded to know what the Corps was sending into the water and how much of it was going in.

“When you’re not regulated under a permit, you don’t have to say what the impact (of pollution) on water was,” Powers said.

Nationally, the settlement could force all unpermitted dams to obtain National Pollutant Discharge Elimination System permits from the EPA.

Daniel Estrin, an environmental law professor at Pace Law School in White Plains, New York, said the settlement will make it impossible for the Corps to say that all of its pollutant-discharging dams don’t require discharge permits.

“The Corps’ acknowledgement of the need for permits in this settlement will make it difficult for other owners to successfully deny that permits are required in the face of citizen suits like the one brought (here),” Estrin said.

The eight dams affected by the settlement are the Bonneville, the John Day, The Dalles and McNary in Oregon and the Ice Harbor, Lower Monumental, Little Goose and Lower Granite in Washington state.

Environmentalists will be closely watching the type of permit issued by the EPA, Powers said. A “site-specific” permit would likely include limits that the Corps would have to meet on the amount of oil discharged.

If the EPA instead issues a general permit, environmentalists would be less sanguine about its prospects, Powers said. General permits are less effective in compelling change because they are issued without specific metrics that must be met, she said.

In 2009, the EPA found a host of toxins in fish on the Columbia River, including polychlorinated biphenyl, a potentially carcinogenic synthetic that was banned for production in the U.S. in 1979.

The eight dams use turbines that have shafts and hubs filled with oil or other lubricants. The oil leaks to the surface, along with oil from drainage sumps, transformers and wickets that control water flow.

By Ansel Herz, The Stranger 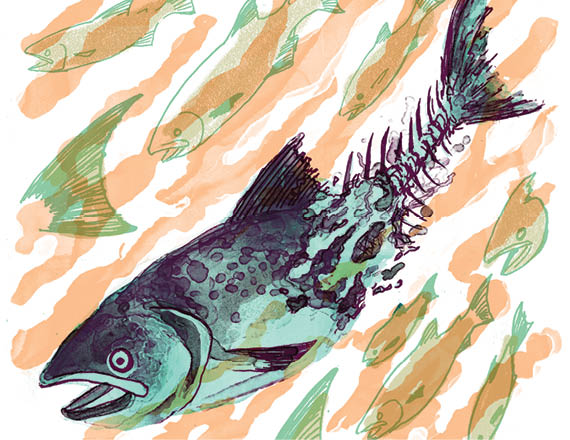 Washington State has two choices: a 10-times-higher rate of cancer among its population, particularly those who eat a lot of fish, or a bedraggled economy. That is, assuming you believe big business in the long-running and little-noticed debate over our “fish consumption rate,” a debate that Governor Jay Inslee is expected to settle, with significant consequence, within the next few weeks.

The phrase “fish consumption rate” sounds arcane and nerdy, for sure, but it really matters, and here’s why: There are a plethora of toxic chemicals—things like PCBs, arsenic, and mercury—that run off from our streets, into our waters, and then into the bodies of fish. The presence of those pollutants puts anyone who eats fish (especially Native American tribes and immigrants with fish-heavy diets) at higher risk of developing cancer.

Knowing this, the state uses an assumed fish consumption rate (FCR) to determine how great cancer risks to the general population are and, in turn, to set water-cleanliness standards that could help lower cancer rates. Currently, Washington’s official fish consumption rate is just 6.5 grams per day—less than an ounce of fish. Picture a tiny chunk of salmon that could fit on your fingertip. That’s how much fish the state officially believes you eat each day. But that number is based on data from 40 years ago. Everyone admits it’s dangerously low and woefully out of date.

Three years ago, Oregon raised its FCR up to 175 grams (imagine a filet of salmon), the highest in the nation. Now it’s up to Governor Inslee to update Washington’s FCR. Jaime Smith, a spokesperson for the governor, says he’ll make the final call in the next few weeks. Meanwhile, as with anything else, there are groups lobbying Inslee on either side. The business community—including heavyweights like Boeing, the aerospace machinists, local paper mills, the Washington Truckers Association, and the Seattle Chamber of Commerce—want our FCR to be lower. In a letter to Inslee on April 1, they warned that a higher FCR would result in “immeasurable incremental health benefits, and predictable economic turmoil.” In other words, the letter says, a one-in-a-million cancer risk for people who eat a lot of fish would hurt the economy, while a one-in-a-hundred-thousand risk is more reasonable.

Smith, the governor’s spokesperson, says the governor wants to raise the FCR in a way “that won’t cause undue harm to businesses. Obviously business has a stake in this.”

But, Smith says, “at the same time, we have people who eat a lot of fish.” Businesses have hired consultants who’ve painted worst-case scenarios, she explains, “that probably aren’t realistic.”

At the end of the day, does the governor’s office have any evidence that raising the fish consumption rate would actually kill jobs? “Not necessarily,” Smith says. She hinted that Inslee will raise the rate to a number close to Oregon’s.

In fact, businesses like the Northwest Pulp and Paper Association made the same dire predictions before Oregon increased its FCR to 175 grams per day. What happened? “We are not aware of any business that has closed that was directly attributable to those rules,” says Jennifer Wigal, a water quality program manager for the Oregon Department of Environmental Quality. Were there job losses? “Not that I’m aware of,” she says. Broadly, Oregon employment rates have continued to trend upward since the recession, while the job availability in the paper and pulp industry, she says, has long been slowly declining.

Opposite the business community are Native American tribes, environmental groups, public-health experts, and the Seattle Human Rights Commission. (In a strongly worded March resolution, the commission said the state should raise its fish consumption rate to same level as Oregon’s.) Jim Peters, of the Squaxin Island Tribe, says the waters of Puget Sound, where tribal members have always fished, need to be better protected from pollutants. “It’s part of our life,” he says. “It’s part of our culture.” The tribes are “pro jobs,” Peters says, but “Boeing has been unwilling to come and talk with us.”

This is a defining moment for Inslee: Where he sets this number, the FCR, will send another signal about his willingness to stand up to Boeing (after his support of $8.7 billion in taxpayer subsidies for the company last year). It will also show whether or not he’s serious about following through on his commitments to do battle on behalf of the environment, promises he ran on. So keep an eye out. And in the meantime, says University of Washington public-health professor Bill Daniell, don’t eat the fish near Gas Works Park. 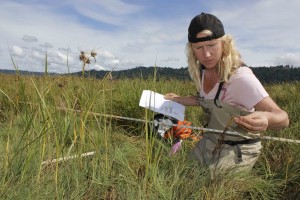 Kneeling in a thicket of vegetation in the Skokomish estuary, Shannon Kirby combs her hands through the tall green grasses in front of her, calling out codes that identify them by size, type and abundance.

The habitat biologist for the Skokomish Tribe is studying the native freshwater and saltwater vegetation that is taking over the Skokomish estuary, which was diked and dredged for 100 years until recently.

“The response in vegetation is very promising, as is the diversity that’s out here,” Kirby said. “Estuarine plants are a huge source of food for animals, and double as a water filtration system, neutralizing pollutants and providing nutrients for plant growth. We’re right on target for where an estuary should be.”

Since 2010, every August, when vegetation is in full bloom, tribal staff visit 75 sites throughout the 1,000-acre estuary, looking at plant types, sizes, growth and soil composition.

These observations coincide with the tribe’s insect studies, which include conducting lavages on juvenile salmon to determine the insects they are eating.

“The quality of salmon habitat is determined by the plants that are out here and the insect food source,” Kirby said.

The tribe has been restoring the estuary at the mouth of the Skokomish River since 2007, through dike and culvert removal, large woody debris installation and native plant revegetation. Through three phases so far, the tribe has restored up to 1,000 acres of habitat for salmon and wildlife.