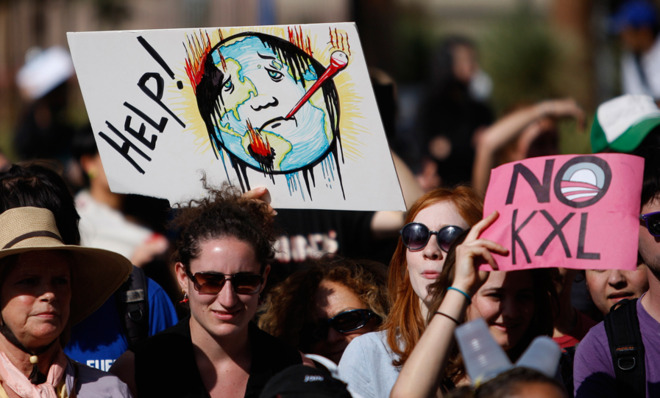 We’re starting to get on the same page. (David McNew/Getty Images)

By Neil Bhatiy, The Week

The conventional wisdom on climate change is that the issue is politically toxic. But it turns out the American people may be prepared for the kind of enormous undertaking that would be required to stem the catastrophic effects of climate change — including unilateral action by the U.S. government.

Last month, the Yale University Project on Climate Change Communication and the George Mason University Center for Climate Change Communication published “Politics and Global Warming,“ a massive survey of 860 registered voters on the subject of the government’s role in fighting climate change. While the results appear to confirm that there is still a strong partisan divide on the issue, there is, as the report authors state, “much more going on beneath the surface.”

Perhaps the most crucial finding is that 62 percent of respondents are not content to have the U.S. wait on the sidelines unless and until other nations commit to emissions cuts. All but the most conservative of respondents said the U.S. should reduce its emissions “regardless of what other countries do.” Climate change skeptics have long argued that anything the U.S. does will not count for much if large polluters like India and China do not also take steps to curtail their carbon output. The Obama administration has argued that the U.S. has to exhibit leadership on emissions cuts (most recently through Environmental Protection Agency rules on existing and new power plants), and that the U.S.’s credibility at forthcoming climate talks in Paris rests on a demonstration of American commitment.

The poll numbers suggest many Americans intuitively understand this. The partisan breakdown is intriguing: While Democrats (especially liberals) are solidly behind this flavor of American unilateralism, Republicans are divided: 57 percent of self-described liberal and moderate Republicans would support that effort.

The poll also suggested fairly wide acceptance of several other benefits of emissions reductions, including public health improvements, energy self-sufficiency, and poverty reduction. There is fairly broad agreement that taking steps to reduce global warming will “[p]rovide a better life for our children and grandchildren,” a catch-all statement that indicates Americans are willing to make some sacrifices now in exchange for benefits down the line.

More concretely, most people seem to buy into the EPA’s argument that its emissions reduction plans will have public health benefits (54 percent total; 72 percent among Democrats and 46 percent among Republicans), an improvement from a previous Bloomberg poll that asked the same question.

Many Americans also look forward to climate action reducing dependence on foreign oil (55 percent total), though so far there is no climate-related public policy intervention in the offing that would drastically reduce oil consumption. The EPA regulations affect power plants, very few of which are oil-fueled, and our declining oil imports over the past half decade can largely be attributed to domestic drilling efforts, especially extraction of tight and shale oil. The polling suggests, however, that the American people closely correlate the end-result of climate action with energy security.

The only result that may give climate hawks pause was the benefit that polled as the least popular: That addressing climate change would improve U.S. national security. Even among liberal Democrats, it is not an easy sell (47 percent); it does not even break 30 percent with moderate or conservative Democrats and only 24 percent for Republicans as a whole. Previous studies show that adopting this frame is unlikely to convince conservatives to take climate change seriously (David Roberts has written previously on the “boomerang effect” of such arguments). Indeed, only on poverty reduction is there less agreement than national security improvement.

The belief that climate change and national security are not interrelated is prevalent despite repeated warnings from the U.S. intelligence and defense communities. As The Week‘s Ryan Cooper put it in a recent piece, the imperatives for risk management and self-preservation with regard to climate change are understood very well among the military. There are two points worth making about this.

The first is that it is a relatively novel and recent development to think about climate change in national security terms. People typically think of climate change as an environmental problem, rather than a security one, so it is no surprise that saving plant and animal species and preventing destruction of life scores much higher. Additionally, aside from military responses to natural disasters — such as the 2004 Indian Ocean tsunami or the 2013 typhoon that devastated parts of the Philippines — there is no headline event that would cause people to link climate and national security.

The second point is that, on some level, the fact that public opinion is not catching up with some sectors of elite opinion is not necessarily an immediate cause for concern. That the argument is not making inroads with Main Street is less of a problem than it not influencing policy in executive departments. While Congress has abdicated its responsibility on climate change legislation, the Obama administration has been pro-active.

Still, what these findings suggest is that the steady drumbeat of analysis on climate change is having a positive effect. People are generally aware there is a problem, and are generally supportive of policies to fight it, even going so far as to say the U.S. can strike out ahead of other countries. People also recognize that benefits will accrue in such a way as to eventually justify the cost. While there is still a motivated minority resisting these findings, the Yale–George Mason report confirms they are nothing more than that: A minority.