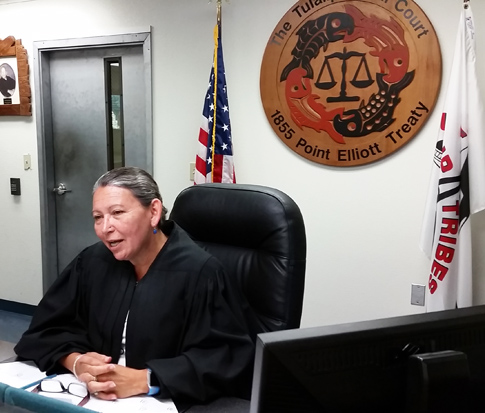 The Tulalip Tribes Probation Department is an integral component to Tulalip Tribal Court. A kind of cross between a counselor, cheerleader, champion and hall monitor, the probation staff are a bridge between the court and the client.

“I like to think that orders of the court are geared towards helping people make better choices and probation is the arm that helps them understand what they’re required to do,” explained Tulalip Chief Judge Theresa Pouley. “When you are found guilty of a crime the court is going to give you a list of requirements. We can trust that you’re going to do it, or someone can help monitor whether you comply and help you problem solve ways to be in compliance.

“The Probation Officer receives a copy of the judgment and sentence, which lists all of the things the client has to do. Probation also informs the court when they aren’t doing what they’re supposed to do.”

Tulalip Associate Judge Ron Whitener followed up, “They also advocate for their clients with us [the judges] because they know the true circumstances of their lives. Even though someone might be out of compliance, probation might say we want to come up with a plan to stay in compliance.”

Probation is a complex concept and the reasons that a client receives probation are as varied as the reasons that bring clients into the court. Probation can be a way to give clients a chance to make good without jail time or other sanctions. It can be a way to transition clients back to the community more successfully. Or it can be a way to keep in touch with those at high risk of re-offending, so they don’t simply do their time and slip quietly back into the community to carry on with their former criminal activities.

Judge Pouley gave an example of a non-violent offense that might receive probation, “For a class E offense, possession of a controlled substance there is a maximum penalty of 365 days of jail and a $5,000 fine. It doesn’t do anyone any good to put a first time offender in jail for 365 days and charge them $5,000. If they’re a first time offender, you really want to figure out how to get them treatment. For someone with substance abuse issues, it’s not always easy to make good on your promises [to get treatment], probation helps them do that.”

Judge Whitener described how the relationship between a client and the probation officer can provide positive peer pressure that encourages clients to succeed.

“People, especially with substance abuse, need that structure. The knowledge that they have a person who is going to check on them, knowing that tomorrow I have to go talk to [my probation officer] and he’s going to know, from my chemical dependency counselor, whether I’m going to my sessions. He’ll know if I paid my fine. That makes it easier for the short term.”

Judge Whitener continued, describing probation as a tool to do what is best for the community and the client.

“It’s a system of harm reduction and rehabilitation,” he said. “You want to rehabilitate [the client] and you want to reduce harm to the community. You could put them in jail, but it would be a huge cost. You really want to find out what is going to work for the individual and that’s what probation does. They get to know their clients. They do an assessment of individuals and come forward with a tailored plan for what is going to have the best likelihood of success.”

He described probation as a form of cognitive behavioral therapy, “You rewire the brain towards the positive way of living, rather than the negative. You’re reinforcing a positive lifestyle, you are also being consistent and you have sanctions [when a client doesn’t follow through].

“There’s no magic pill that can solve the problem. It takes lots of hands and some time,” he continued. “It takes a lot of work, sometimes it takes multiple criminal charges and a few times on probation. And sometimes it never happens. We always want there to be a solution. We have to accept that for a lot of people, their lives get better, for some people it doesn’t.”

For violent offenders or those at high risk of reoffending, Judge Pouley explained that sometimes the ratio of sentencing and probation is a balance between holding the offender accountable for their actions, and having an avenue to regulate their actions once they’ve served their time and/or paid their restitution.

“For the vast majority of our clients, we view our role as encouraging people to make good choices and discouraging bad choices. However, there are a small percentage of the clients that are a danger of the community,” she said.

“Most people in that category do up-front jail time as a sanction,” Judge Pouley explained. “But putting someone in jail for 365 days and then on day 366 having no supervision whatsoever isn’t always the best. You want to the sanction to show that you’re serious about not hurting people, selling drugs or being a sex offender, but at the same time you want some supervision afterwards to monitor them for the safety of the community. You want to make sure they’re taking the classes they’re supposed to be taking, but also staying away from the areas they’re supposed to stay away from.”

“We love what we do and we’re trying to help people make better choices,” Judge Pouley recapped. “When it works, it’s such a fabulous thing. And when it doesn’t, it’s pretty heartbreaking.” 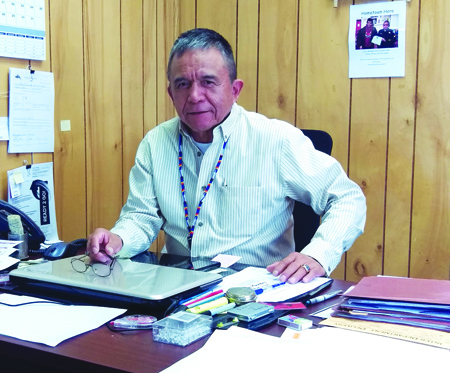 Both judges expect that changes in the probation officer may make probation an even more effective tool for clients. For the first time ever, a Tulalip citizen is serving as the probation officer. Tulalip tribal member Andy James is replacing longstanding Probation Officer Jim Furchert. Andy brings with him not only his skills as a United States Marine, but also fourteen years of experience as a Tulalip police officer and he’s already a staple in the courtroom where he’s served as the Transport Officer and Court Bailiff. Known for his fatherly advice and strong cultural teachings, Andy is a natural fit.

“Of the great things about Andy is that he used to do this as Transport Officer,” Judge Pouley described. “He’d give words of wisdom like any elder in your family might give. We’re pretty excited to have Andy and his experience change the dynamic in Probation. He has a really vested interest in the community. He knows the clients and families and brings that depth of knowledge and law enforcement experience to the probation officer job.”

Judge Whitener agreed, pointing out that Andy’s standing in the community will help make the Probation Office more relevant.

“The one thing Probation hasn’t had is the voice of an elder that’s familiar with the community,” he said. “For our clients, someone like that telling them what they need to do resonates more than someone who doesn’t have the same status in the community. It’s a great thing to have his perspective.”

Andy already plans to incorporate culture and tradition as a way to empower clients. He hopes the integration of traditional culture will help break down the institutionalized feeling that many clients have about probation.

“Before, I only had parts of the puzzle,” explained Andy, describing his former role as court bailiff. “Now I have to go through all the client files and make recommendations. I have the whole puzzle to work with now.”

Andy has always used his time with clients to encourage them to comply with court orders and become involved with their culture as a way to heal.

“In some ways it’s identical,” said Andy, comparing previous work with Tulalip Police to his new position as probation officer. “I am dealing with someone’s life.”

As probation officer, Andy is responsible for monitoring over 180 clients, with the assistance of two additional staff members. He has to provide sentencing recommendations, not only in Tulalip Tribal Court, but also state, federal and other tribal courts. The Probation Department coordinates with a variety of tribal entities including the Tulalip Central Drug and Alcohol Testing Department, Behavioral Health Services, and various State and Federal probation and correction departments.

Andy will spend the next few months orientating himself with each client file and new probation software.

“This is a hard job,” said Andy. “I am not perfect and I stress that to clients. I will treat them with respect and let them know we all make a difference, and we all have a purpose.”