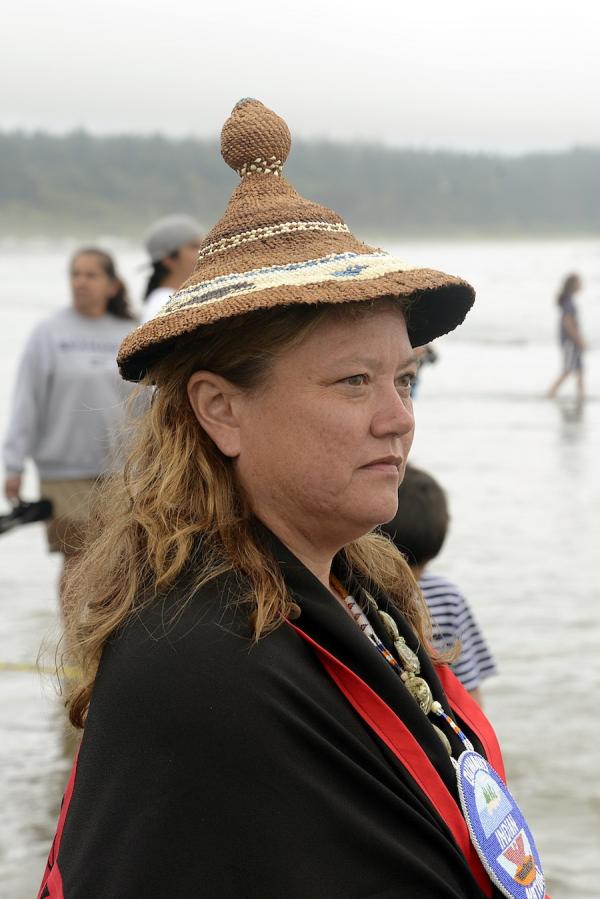 Fawn Sharp: “Challenges, by definition, are obstacles that can be met and overcome.”

Many challenges still present for the Quinault Indian Nation. That was the message Fawn Sharp presented to tribal members on March 29 following her re-election to a fourth term as President of the Nation.

She spoke about federal funding cutbacks to the impacts of climate change and subsequent relocation needs. “But challenges, by definition, are obstacles that can be met and overcome, and as we do overcome them we will grow.”

The Quinault Nation of 3,000 people sits on more than 208,000 acres of land in the southwestern corner of the Olympic Peninsula in Washington state.

The Nation has been working tirelessly to stay in front of climate change. Sharp has continuously been among the most vocal voices in regards to Native communities, like her own, who are dealing with rising sea levels, loss of irrigation, and more.

“People should never think they live in some form of protected bubble, or that they can ignore the environment and get along just fine,” Sharp recently said in an interview with ICTMN following her appearance before the House Interior Appropriations Subcommittee on March 24.

Sharp’s speech to the tribe was not all about obstacles ahead though. She highlighted a variety of assets, qualities and opportunities the tribe and its members possess. Among those assets were natural resources, courage and vision. “With courage and vision, we are headed for success. Why? Because we are Quinault,” she said.

Economic self-reliance was a highlight of her speech. She commended the tribe for its consistent move towards the goal of self-reliance from the tribal owned businesses to individual tribal free enterprise. Quinault Indian Nation is the largest employer in Grays Harbor County. With economic diversity that spans the Quinault Casino and Resort, tribal stores, wood chip manufacturing, dock services, gas stations, and tribal staff. Total employment sits around 3,000 people. Not to mention the various businesses owned by tribal members that is showing a steady increase as well, with the assistance of tribal training, licensing and natural resource management.

The Quinault Indian Nation has an eleven member governing body known as the Quinault Business Committee which Sharp presides over. Tribal members are democratically elected by the adult tribal membership, or general council, to serve three-year staggered terms.

Members of the QBC are seen as constitutional officers who hold the responsibility of making sure the service and performance of numerous tribal departments – social services, health care and education, road maintenance, natural resources management and emergency services – operates accordingly.

Sharp has a J.D. from the University of Washington, School of Law; advanced certificate in International Human Rights Law from Oxford University; and a Bachelor of Arts degree in Criminal Justice from Gonzaga University in Spokane, Washington. Among her many roles, Sharp serves as President of the Affiliated Tribes of Northwest Indians and Northwest Regional Vice President of the National Congress of American Indians.

She resides on the Quinault Indian Reservation at Lake Quinault with her husband Dan Malvini and sons Daniel, Aljah, and Jonas, and daughter, Chiara.

Johnston, previously the first council, will be serving in his first term as vice president. He says he hopes to follow through on issues of concern raised by the General Council and supporting President Sharp in overcoming the obstacles the nation faces.

Ralston will be serving his third term as tribal treasurer. He says he looks forward to the challenges ahead and community interactions.

James has held various positions on the council over the last 11 years and will be filling the remaining two years of the first council position. “I look forward to developing changes in our Education & TERO programs along with Treaty right protections,” she said

Underwood enters her third term as tribal secretary. She said, “The Quinault people spoke loud and clear on the direction they want to go and the improvements they want to see. Their voices were definitely heard and I will do my best to fulfill their wishes.”