TACOMA, WA (5/4/15)—United States District Court Judge Ronald B. Leighton dismissed a lawsuit this afternoon which had been filed in January against the Quinault Indian Nation and the Washington State Department of Natural Resources seeking to revoke ownership of Lake Quinault from the Tribe.
“This quick and explicit ruling was never in doubt,” said Quinault Nation President Fawn Sharp. “As I said back in January, Lake Quinault is undisputedly within the Quinault Reservation. This was a meritless lawsuit. Lake Quinault is sacred to us. It is unquestionably within our Reservation and we take our responsibility to manage it properly very seriously.”
The suit, which was filed by North Quinault Properties LLC, questioned the Tribe’s ownership of the lake. The suit had included DNR for alleged failure to fulfill its management responsibilities. But the challenge actually stemmed from a few local landowners’ reactions to closure of the lake by the Quinault Nation last year, an action taken to protect the lake from pollution problems, invasive species and violation of tribally mandated regulations, said Sharp.
“Our objective is to protect the lake for future generations. We realize it is a popular recreation destination, and we are happy to accommodate those interests, but only as long as the lake is respected and protected at levels we accept,” she said.
“We want to acknowledge the fact that this frivolous lawsuit was brought by a single landowner and that a majority of landowners around the lake understand and support our objectives. They have shown respect for our efforts to reach out to work cooperatively while recognizing the exclusive governing authority of the Tribe. Good public policy among separate and distinct sovereigns requires cooperation, good faith, respect, and, when dealing with tribal nations, an understanding, in principle and practice, that our governing powers long pre-date the United States and its political subdivisions. I want to publicly thank our neighbors and say that we look forward to strengthening our valuable relationship with them. Working together, as we have been able to do, is the best way we can all assure that Lake Quinault will remain clean, beautiful and available for all citizens for many years to come,” she said.
Judge Leighton issued separate dismissal rulings for the Tribe and the DNR. The Court granted the Tribe’s motion to dismiss based on sovereign immunity. The state dismissal was based on the Eleventh Amendment to the U.S. Constitution. 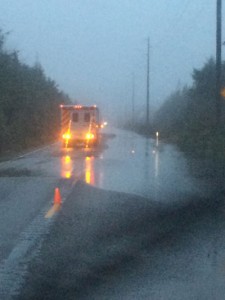 TAHOLAH, WA (1/5/15) – The Quinault Indian Nation has issued a Declaration of Emergency due to extreme rainfall over the past two days which has caused numerous landslides, culvert failures and washouts on the Quinault Reservation. The QIN Property Management Division has ordered an emergency inspection of all the Tribe’s buildings and infrastructure and major access roads into the Tribe have either been closed or are considered extremely hazardous, said QIN President Fawn Sharp.

“The Moclips Highway 109 Bridge near Quinault Village, a main access road to and from Nation has been washed out and closed. That is a major problem for the Tribe,” she said.

“The Moclips River flooding is the worst I’ve seen it. If it is bad as it looks, SR 109 could take days to repair. And if our own Moclips Highway needs major repairs we will have significant commuter problems,” said Sharp.

She added that the Moclips River is flowing over its banks one mile south of the Moclips Highway. For safety reasons SR 109 in Moclips has been closed. “The river has claimed at least two vehicles. One belonged to a Quinault elder and was left abandoned on the highway in the flood. An unknown number of other tribal members who live adjacent to the River were evacuated at midnight last night and are now taking refuge at the Quinault Beach Resort and Casino in Ocean Shores. This section of SR 109 is closed until further notice. SR 109 is very treacherous for motorists currently due to standing water and debris caused by the flooding,” she said.

According to sources in Queets the sewer treatment plant was compromised by the Queets River which overflowed its banks. It is unsure whether or not the sewer plant is non-operational or if the service road is damaged beyond repair at this time. This plant is being monitored closely by the Nation’s managers. This breach has not been verified at this time.

The Nation highly recommends that drivers stay away from the beaches as an alternative route. The surf is up and even at low tide beach driving is not safe.

Our very own Community Services Director, Michael Cardwell, is clearing storm drain covers. The Nation’s responders have been out in force, working hard at everything from clearing drains to evaluating damage, said Sharp. “We are very happy and relieved to report that, to our knowledge, there has been no loss of life or injury caused by this heavy rain and flooding,” she said.

Reports regarding landslides and flooding have come in from across the county, including closures at the Aberdeen Bluff on State Route 12, U.S. 101 at mile marker 73, US 101 S of Ocean Beach Road, State Route109 , the State Route 109 bypass, Wishkah Road at mile marker 6 and numerous streets in Aberdeen and Hoquiam.

Concerns remain high as tribal emergency personnel are on duty checking conditions, rendering aid where necessary and cooperating and coordinating with other jurisdictions. The deluge has also borne down on the Chehalis River where warmer weather is turning snow to rain in the mountains and a flood watch has been issued by the National Weather Service. Quinault Nation retains treaty protected rights on the Chehalis. There, as in many places, habitat modifications by various industries over the years have diminished the popular desire for watersheds to flood within their natural floodplains, and many of the fixes and proposed fixes only make matters worse, she said.

“The good news is that the rainfall is expected to diminish this evening and is not likely to return until Friday. But it is important for people to remain alert for potential slides, lingering flood dangers and infrastructure damage. Please, start this new year off safely,” said Sharp.
“I want to applaud the work done by those who have pitched in to help others during this time of need, particularly our Quinault staff members. They have been tireless and dedicated, a great example to everyone. That, too, is a great way to start the year 2015.”