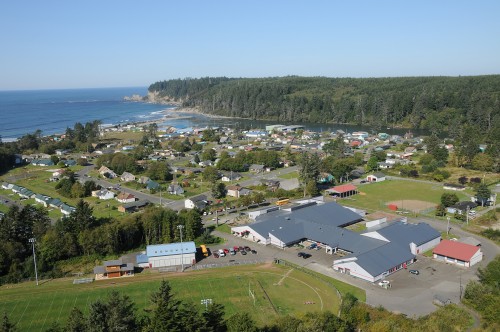 TAHOLAH – On March 25, the encroaching waters of the Pacific Ocean awakened residents in Taholah, Washington, when their aging seawall was breached and flooded sections of their Lower Village. Now, the village is faced with relocation due to changes in climate resulting in rising sea levels, tsunami threats, and flood danger from the Quinault River.

The ancestral home of the Quinault people is classified as a tsunami hazard zone by the Washington Emergency Management Division and is no longer considered safe. As a result, a comprehensive master plan is being implemented that would move residents and government structures 120 feet above sea level to the Upper Village.

The risks were identified years before when the Quinault Indian Nation undertook a comprehensive analysis of the coastline after increased flooding in the Lower Village. The analysis showed deterioration of the protective berm that separates the Lower Village from the ocean water. With each large storm the ocean encroaches further into the village, making relocation necessary. “We first thought it was rain water, but in 2009 we did a walk down to the ocean line and we discovered the ocean was encroaching much worse than we thought,” said Councilman Larry Ralston, Quinault Indian Nation Treasurer.

What was uncovered was the deterioration of a protective berm that separated the Lower Village from the ocean water and with each large storm, the ocean encroached further into the village, making relocation necessary.

“We did a risk management plan and undertook an emergency preparedness evaluation and it was determined that not only are we vulnerable to the ocean encroaching, but the footprint of our Lower Village is vulnerable to liquefaction, so if we had a large earthquake, the village could actually sink 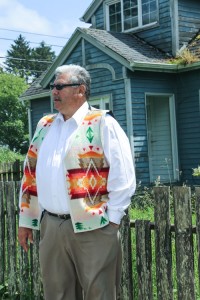 Larry Ralston, Quinault Indian Nation Treasurer, stands in front of his mother’s house which will not be moved during the relocation of Taholah’s Lower Village, and could face possible demolition along with other buildings that cannot be moved.
Photo/ Brandi N. Montreuil, Tulalip News

President Sharp explained the safety of current and future Quinaults is the main priority. “We have a sacred trust and duty to those who are deeply connected to the land and their homes. It is a mix in which we have to plan carefully. We have over 1,000 residents and we have our major retail outlet, the Taholah Mercantile. We have our jail facility, courthouse, daycare and head start, and k-12 school so a number of our critical programs are located right in the heart of the village.”

“As of right now we are in the process of undertaking a feasibility study. The study will fully assess the infrastructure and the number of residents at risk, putting together a plan that we can then take to federal appropriators and members of congress, and other federal agencies in an effort to relocate the village,” said President Sharp.

Preliminary estimates for relocation cost are near $65 million and include the need to acquire land adjacent to the Upper Village, and the building of infrastructures including roadways, utilities, housing, and businesses. The loss of generational history that holds cultural relevance to the Quinault people is something that is also being considered, as is the risk of the “big one” hitting.

“As a resident of the Lower Village, we think about tsunamis more often than not. For a lot of us, we grew up listening to the ocean and we know what the weather is going to be like just by hearing the waves. You are always listening to the ocean to monitor what is going on,” said Ralston.  “I am looking forward to the move, but I also know there are some houses that will be torn down like the one that my mother was born in in 1928. The worst case scenario if we don’t move everyone to higher ground, is that we get hit with a wave at two in the morning and we would only have two or three minutes to evacuate the Lower Village and we lose lives.” 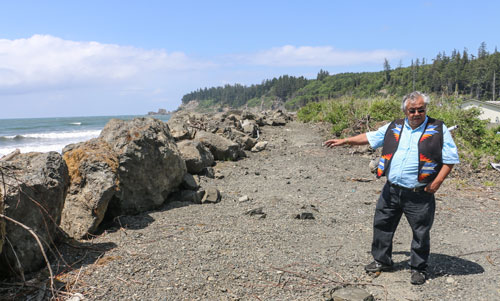 Quinault elder James DeLaCruz Sr. stands by the recently reinforced Taholah seaswall, is among the handful of residents who do not plan to leave the Lower Village during Taholah’s relocation.
Photo/ Brandi N. Montreuil, Tulalip News

With only two ways in and out of Taholah, the risk of liquefaction puts residents at a high risk during evacuation, as roads would be inaccessible. During the event of a tsunami wave residents have limited time to move to higher ground.

Tsunami warning systems in place in Taholah include a siren monitored by the National Oceanic and Atmospheric Administrator headquarters in Seattle. In the event of an earthquake or tsunami wave the siren will go off followed by a voice telling residents to evacuate. To date, the siren has only been used during monthly test drills.

“The benefit of the relocation will be knowing that our citizens are safe, said President Sharp. “The other benefit will be the planning process will have a lot of room to expand. We have a fairly large land base adjacent to the village that we are looking at developing. There will be opportunity to create space for building a private sector economy. We are getting direct input from our membership; if you could take just a blank space, how would you want to design a community? That is the exciting part of the planning stage. There are a lot of great ideas that are emerging from our citizens, and their vision and their view of what a future Taholah will look like.”

Although relocation is necessary, residents will not be forced to move. Some residents like Quinault elder James DeLaCruz Sr. knows he will not be relocating. His house butts against the seawall, and as he explains “The Lower Village has been a part of my life as long as I can remember and this is where my home is until nature changes that. 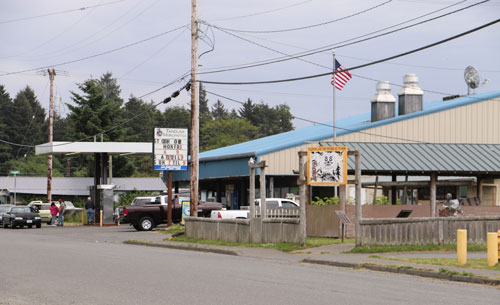 Taholah Mercantile, a Quinault Indian Nation enterprise, is the main, and only, source of perishable food shopping for residents in the Lower Village. It sits a block from the seawall and is at risk of flooding from rising sea levels.
Photo/ Brandi N. Montreuil, Tulalip News

“We believe that every citizen has that right,” said President Sharp. “We will do our best to educate our membership about the risk. We will do our best to provide our citizens the options for relocation, but ultimately we will respect that individual citizen’s absolute right to live where the Creator put them and the lands that were given to our ancestors.”

“Our ancestors had to be good stewards of the land. We have done that here at Quinault,” said President Sharp. “Yet we seem to be paying the price for others who don’t share the same values. Our ocean is becoming acidic, the ocean is encroaching into our ancient homelands, and the glaciers that feed the upper Quinault River and our prized sockeye salmon are disappearing. So while we have been good stewards, we are paying a heavy price for other peoples mistakes.”

The Taholah Relocation Master Plan includes the Quinault Planning Development and Kaul Design Associates. A three-year planning process will be implemented in phases and include gathering information, needs and choices of the community, and final plan preparation.