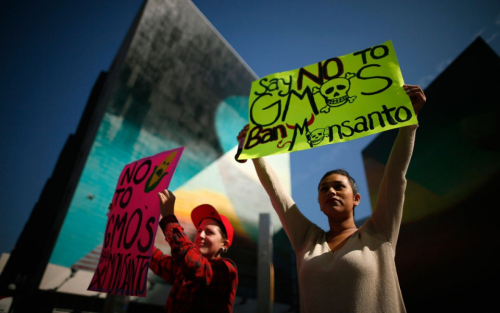 Activists from around the globe participated in a global ‘March Against Monsanto’ Saturday, calling for the permanent boycott of genetically modified organisms (GMOs). This was the second global, anti-Monsanto protest — the first took place on May 25 with over 2 million participants, organizers said.

Photos appear to show hundreds of marchers taking to the streets in cities around the world including Vienna, London, Chennai and Sydney. Rallies have kicked off in U.S. cities as well including Los Angeles and Denver.

Critics of Monsanto, a multi-national biotech corporation, say its seeds destroy the soil and are designed to make constant repurchase necessary because the seeds last only one generation. The seeds must also be used with a variety of the company’s other products like fertilizers, fungicides and pesticides, which have been linked to mass bee deaths.

Monsanto, which touts itself as a “sustainable agriculture company” and is worth over $55 billion, says it produces high-yield conventional and biotech seeds that enable more nutritious and durable crops and “safe and effective crop protection solutions.” The U.S. government also says Monsanto’s products are safe.

March Against Monsanto (MAM), however, says GMOs are not properly monitored to ensure public safety and that no long-term, independent studies were carried out on GMOs before they were introduced for human consumption.

“In the U.S., the revolving door between Monsanto employees, government positions and regulatory authorities has led to key Monsanto figures occupying positions of power at the FDA and EPA. Monsanto has spent hundreds of millions of dollars to obstruct all labeling attempts; they also suppress any research containing results not in their favor,” MAM said in a press release.

GMOs are labeled in 62 countries, but not the U.S. despite several attempts. Last fall, Californian voters narrowly rejected an initiative to label GMOs, and a similar initiative is on the Nov. 5 Washington state ballot.

Prominent environmentalist Vandana Shiva has been outspoken against Monsanto, particularly in light of the corporation’s link to hundreds of thousands of Indian farmer suicides.

“The creation of seed monopolies, the destruction of alternatives, the collection of superprofits in the form of royalties and the increasing vulnerability of monocultures has created a context for debt, suicides and agrarian distress,” Shiva wrote.

Josh Castro, organizer for the Quito, Ecuador march said in a press release that he hopes to stop the “destructive practices of multinational corporations like Monsanto.”

“Biotechnology is not the solution to world hunger … Monsanto’s harmful practices are causing soil infertility, mono-cropping, loss of biodiversity, habitat destruction and contributing to beehive collapse.