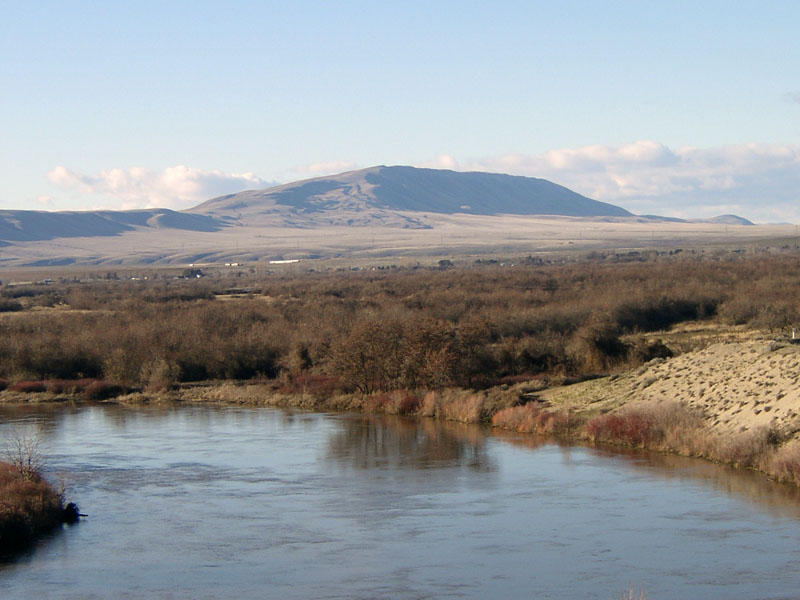 The Yakama Nation and neighboring tribes are strongly objecting to a Congressional move to offer public access to the summit of Rattlesnake Mountain, a place tribal members consider sacred.

The mountain lies in the Hanford Reach National Monument near Richland, Washington.

Central Washington’s outgoing Republican Congressman Doc Hastings authored the requirement that the federal government provide some degree of public access. The provision is now tacked on to a must-pass defense spending bill.

Access to the windswept, treeless mountain overlooking the Hanford nuclear site is currently highly restricted. Philip Rigdon supervises the Yakama Nation Department of Natural Resources. He said the summit of Rattlesnake Mountain should remain off-limits to the general public.

“The mountain is a place that is critical to our culture, our religion and the ceremonies that we continue to perform today,” Rigdon said.

But Rigdon’s arguments may be in vain. A Democratic Senate staffer said the defense spending bill now includes so many unrelated member requests, it’s expected to pass by a wide margin this week.

Last week, the 2015 National Defense Authorization Act won U.S. House approval on a bipartisan 300-119 vote. Many public lands provisions that have been bottled up in the divided Congress for years have now been folded into the mammoth bill.

Some of the measures of Northwest interest would expand the Oregon Caves National Monument and Alpine Lakes Wilderness and protect the Hanford B Reactor as part of a new Manhattan Project National Historical Park.

Representative Hastings had long sought to force the U.S. Fish and Wildlife Service, the relevant land manager, through legislation to provide greater access to Rattlesnake Mountain. The House unanimously passed such a bill in 2013, but it died without a hearing in the Democrat-controlled Senate.

“The views of Indian tribes are legitimate, and they have a right to be heard and consulted,” Hastings said during an earlier House committee hearing. “But the views of local communities and all citizens also deserve to be heard and listened to — and there is overwhelming local public support for access to the summit of Rattlesnake Mountain.”

“The public should expect that if they can visit the summit of Mt. Rainier, then they certainly should be allowed to the summit of Rattlesnake Mountain,” Hastings said as he described the “unparalled views” of the Columbia Basin from the ridge. A gated, paved road leads to the summit.

The Native American name for Rattlesnake Mountain is “Laliik.” Rigdon said Columbia Plateau tribes such as the Yakama, Umatilla and Nez Perce want to preserve the “spiritual” qualities of a holy place.

“It’s astonishing to me that we continue this total disregard for our religion, our ceremonies and this place that has provided for us,” concluded Rigdon.

“Laliik is our Mount Sinai,” Yakama tribal Chairman JoDe Goudy wrote in a recent letter to U.S. senators. “When our Long House leaders feel that a young adult is ready and worthy, Laliik is where they are sent to fast and to have vision quests. This is not a place for Airstreams and Winnebagos.”

The Rattlesnake Mountain provision is one of several aspects of the defense spending bill that trouble tribes. The Yakama Nation chairman also wrote to oppose the transfer of more than 1,000 acres of surplus land at the urbanized edge of the Department of Energy’s Hanford Site for economic development.

Northwest tribes are also joining in solidarity with Native bands in the Southwest who object to the transfer of Tonto National Forest land to a private company that plans to mine for copper.