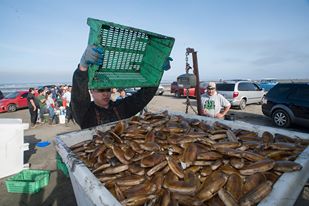 As featured in the NWIFC News

One of the iconic foods of the Quinault Indian Nation will be available to share with the thousands of people who will gather in Taholah for the 2013 Canoe Journey from Aug. 1 to Aug. 6.Tribal members collected razor clams in several ceremonial digs. The clams were frozen so they can be served during the week-long Canoe Journey celebration.

“I can’t imagine hosting the Canoe Journey without razor clams,” said Lisa Sampson Eastman, who has been digging clams since she was 11 years old. “My sister Sabrina and I learned to dig clams from our dad, Charles Sampson.”

Historically, Quinault tribal members used pliable yew sticks to tease the evasive mollusk from its hole in the sand. Today, tribal members use clam shovels to efficiently harvest for ceremonial, subsistence and commercial uses. As co-manager of the resource, the nation also shares surveying duties with the state Department of Fish and Wildlife, protecting razor clams for the future. Surveys of the clam populations are under way now, following the harvest season.

Quinault Pride Seafood purchases the clams from tribal members, providing income for many who are not yet working in seasonal jobs that begin in early summer. The clams are sold for public consumption and bait for fishermen.