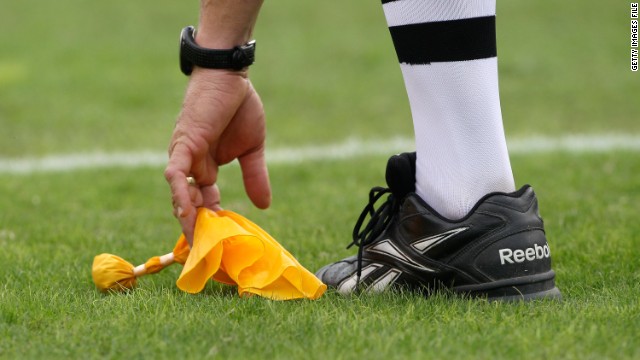 (CNN) — This week, the elite owners of the National Football League are considering instituting a 15-yard penalty for any NFL player caught using the N-word on the field.

Why is it bad to demean a player of African descent, but the pejorative “Redskins” is still just fine for use as the name of the Washington football team? Makes no sense.

As a Native American, a citizen of the Oglala Lakota Nation and someone who participates in the Native American community and doesn’t just claim to be Native American because I have a picture somewhere of a great-grandma who had high cheekbones, I wonder: Hey NFL, why aren’t you just as pissed about the R-word?

I’m not black, and although I find the N-word repugnant and wrong, I’m not here to rage about it. I’m here, in fact, to make a point.

Throughout the last NFL season, Native Americans diligently and consistently worked to remind the conscientious objector (not the bigot — you can’t get much into the brain of a bigot) that Redskin is a racial slur. And we, the descendants of those who survived the Founding Fathers and westward expansion and Christian boarding schools, will not sit idly by as opulent white men tell us that the R-word isn’t an epithet and that it’s part of their tradition.

In fact, this was the case last week on the D train here in New York City when, in a moment, I had enough of it all and encountered a tall black man with headphones on his ears and a Redskins lid on his skull.

He was standing, and I was standing. We faced each other, backs to the sliding doors, and I remember staring and glaring at his hat, then at his eyes, then up again to his cap. It wasn’t long, maybe just one stop, before he ripped his headphones off and asked me if I had a problem.

He paused for a quick second and seemed a bit perplexed by my response. He probably thought I was a mad fan of a different team — the kind of person who fights in stadium parking lots with beer in his gut and hate in his heart for any insolent denizen who dares don the logo of the visiting team.

“What a privilege,” I continued, “to be able to walk into a subway and not have to see someone wearing a hat with the stereotypical likeness of your people on it and a racist pejorative to accompany the image.”

And it gets better. I was on a Canadian radio show recently discussing the utter vulgarity of the R-word when a caller said to me, “You know, it’s so trivial. It’s just a word. …”

“But isn’t ‘colored’ just a word, too?” I barked. “Would you be so audacious as to make the same argument to an African-American about that word?” I waited for a loathsome rebuttal, but I all I got in return was dead Canadian air.

So, if you’re still curious “what makes the red man red?” (Thanks again, Disney’s “Peter Pan”), all you have to do is go to New York City and see the bevy of Christopher Columbus statues, and then go to Ohio and see the wiggy white men painted in red-face at the Cleveland Indians game and then end up back in Landover, Maryland, where the white and black and brown Washington Redskins taunt you, and then still ask: “What’s the big deal?”

I recently asked my Native elder in the West about what he thinks of the term. He said, “I’m not red … I’m pissed.” And so am I — because if you’re not pissed, you’re not paying attention.

The opinions expressed in this commentary are solely those of Simon Moya-Smith.

Editor’s note: Simon Moya-Smith is a citizen of the Oglala Lakota Nation and a writer living in New York City. He has a master’s from the Columbia University School of Journalism. You can follow him on Twitter @Simonmoyasmith.

In its latest effort to get the Washington Redskins to change their name, the Oneida Indian Nation of upstate New York will hold a symposium at the same hotel where NFL will meet Monday.

The Oneida Indian Nation says the Washington Redskins’s name is a racial epithet.

The Oneida Indian Nation of upstate New York said Thursday it will take an in-your-face approach in its ongoing battle to get the Washington Redskins to change the team’s name.

The tribe, which says the name is a racial epithet, will host a symposium on the topic Monday at the same Washington hotel where the National Football League is holding its fall meeting, beginning the next day.

Reactions to Deadspin’s Dave McKenna’s report yesterday, “Redskins’ Indian-Chief Defender: Not a Chief, Probably Not Indian,” are spreading across the Web and here ICTMN presents a few of the top ones. Meanwhile, still not a related peep out of the Pigskins camp yet, including in their “morning roundup of what the local and national media have to say about the Washington Redskins.” And the original May 3 interview with “Chief” Stephen Dodson, including the video, remains the same on Redskins.com.

“Click through on the [Deadspin.com story link] to read about how sloppily and cavalierly and plain old incorrectly the WFO (Washington football organization, which I’ll use heretofore as shorthand) described Dodson’s alleged lineage, showing that no one at the organization really gave one-tenth of a shit about where these people actually come from.

“[The] Redskins, who apparently have chosen to dispense with steps like vetting a guest, put [Dodson] on their in-house web show, described him as a Chief, and had him explain why he supports the name. And, yes, the guy actually said that Native Americans on the “reservation” actually great each other with, “Hey, what’s up, redskin?””

“The ridiculousness of Dan Snyder’s ridiculous tenure as Washington Redskins owner is something we’ve all become familiar with, but it’s reassuring to know that someone so comfortable in their role can always come up with a new trick or two.”

Participate in the poll here!

A group of U.S. House members has offered a bill that would prohibit the term “Redskins” from being trademarked, as the debate over the NFL team’s name expands from the legal system and the court of public opinion to Capitol Hill.

Del. Eni Faleomavaega (D-American Samoa) has authored the Non-Disparagement of American Indians in Trademark Registrations Act of 2013, which would cancel all existing federal trademarks using “Redskins” to refer to Native Americans and prohibit future trademarks as well. Del. Eleanor Holmes Norton (D-D.C.) — a critic of the team’s name — is an original co-sponsor, along with Reps. Raúl Grijalva (D-Ariz.) and Karen Bass (D-Calif.).

A Redskins spokesman said the team had no comment on the bill.

There is no guarantee that the measure will even receive a committee hearing in the House, much less a vote. But it comes at a sensitive time: Earlier this month in Alexandria, a three-judge panel on the federal Trademark Trial and Appeal Board heard arguments over whether the term Redskins should be considered a slur and therefore not worthy of trademark protection.

It could be a year, the Associated Press reported, before the judges issue a ruling in the case, which stems from a petition by five Native Americans. And even if the Redskins lost their trademark, they wouldn’t necessarily have to change their name. But it would be easier for other businesses and people to cut into the franchise’s profits by selling paraphernalia with the name on it.

Critics of the team’s name also spoke up during a forum last month at the National Museum of the American Indian, saying that the term is demeaning, and dismissing the franchise’s argument that the word is meant to honor Native Americans rather than disparage them.

For her part, Norton recently told the Hill newspaper that the Redskins “should consider” a new moniker. “I am a fan of the Redskins. I’m just not a fan of their name,” she said.

District Mayor Vincent Gray has also weighed in on the subject, albeit carefully.

“I would love to be able to sit down with the team … and see if a change should be made,” Gray said in January, though he later clarified that he simply meant the subject would likely be discussed if the Redskins were to move back to the RFK Stadium site, which is on federal land.

The long-running battle over the Washington Redskins name gets a restart today, Thursday, March 7, when a group of Native Americans goes before the Trademark Trial and Appeal Board in Washington, D.C, to argue that the franchise should lose their federal trademark protection, based on a law that prohibits registered names that disparaging, scandalous, contemptuous or disreputable.

Leading the move against the use of the term redskins is Susan Shown Harjo, who has spent nearly a third of her life fighting the use of the nickname.

According to CBSDC and the Associated Press, Redskins general manager Bruce Allen said last month that it is “ludicrous” to think that the team is “trying to upset anybody” with its nickname, which many Native Americans consider to be offensive.

That’s beside the point, Harjo told CBSDC/AP. She’s never suggested that the Redskins deliberately set out to offend anyone. But that doesn’t mean that people aren’t offended.

“It’s just like a drive-by shooting,” Harjo said Wednesday. “They’re trying to make money, and not caring who is injured in the process — or if anyone is injured in the process. I don’t think they wake up or go to sleep dreaming of ways to hurt Native people. I think they wake up and go to sleep thinking of ways to make money — off hurting Native people.”