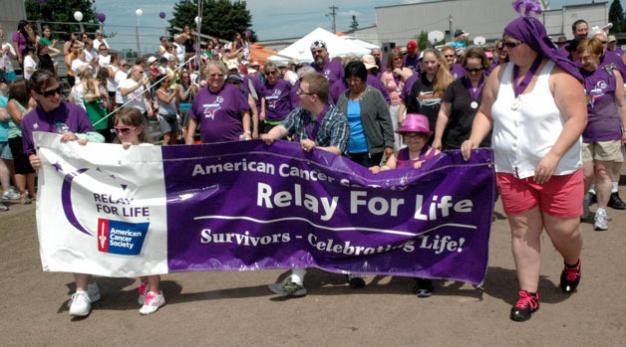 Kirk Boxleitner
Cancer survivors kick off the 2013 Marysville Tulalip/Relay For Life with the opening lap at Asbery Field on June 29.

Kristin Banfield, event chair for this year’s Marysville/Tulalip Relay, welcomed those teams of walkers to Asbery Field on Saturday, June 29, by noting how the overnight Relay is meant to reflect a day in the life of someone who is facing cancer, with the darkening of night eventually giving way to the dawn of a new day, and added that this year’s Relay marked a pleasant change of pace from the cold and rain that’s greeted local walkers and volunteers in previous years.

“I’m here not just as the Relay event chair, but also as a cancer survivor,” said Banfield, who was diagnosed with breast cancer in 2008, and while she’s since made a recovery, she’s described herself as a direct beneficiary of the money raised by Relays not just in Marysville and Tulalip, but all around the world. “So I just want to say thank you to all the companies and sponsors who have provided for this event, whether through financial support or donating goods and services. We’re so fortunate to have so many caring companies, in addition to our incredible elected officials.”

While Banfield works as the assistant city administrator for Arlington, she introduced Marysville Mayor Jon Nehring, who asserted that cancer has touched the lives of everyone in some way, whether they’ve fought it themselves or known those who have been faced with that fight.

“To my mind, this is one of Marysville’s most important events of the year,” Nehring said. “I salute everyone who’s battled cancer. Your stories are so heart-wrenching. The city of Marysville is glad to partner with the Marysville/Tulalip Relay to try and beat back this disease, and it’s great that you all have come out as a community for this cause.”

Teresa Stubrud is the mother of two cancer survivors, Austin and Kate, who are not only still children, but also diagnosed with Down Syndrome. Before Austin and Kate led the survivors’ lap to kick off this year’s Relay, Teresa compared her children’s journeys, since Kate was diagnosed with cancer shortly after Austin was finally declared cancer-free in 2005, after his own series of treatments.

“Kate was two and a half years old at the time, and it took two years before her treatments ended in 2008,” Teresa Stubrud said. “Six months later, it had returned.”

Kate’s only option was a bone marrow transplant, which is a painful and life-threatening procedure even for adult patients, never mind for a child with Down Syndrome, and Teresa recounted how she and her husband Jon had agonized over their decision, knowing how much Kate would suffer.

“The strength and courage and will to live that she’s shown ever since has been amazing,” Teresa Stubrud said. “She’s taught me more in her 10 years than I’d learned in my entire life.”

Stephani Earling, community relationship manager for the Great West Division of the American Cancer Society, took the time to pilot the wheelchair of her grandfather, Jim Perin, who had been diagnosed with Stage 4 kidney cancer only two weeks before, which has metastasized in his lungs.

“This has given my work for the American Cancer Society a whole new meaning,” Earling said.

“This is just a great outfit,” said Perin, 85, who was once the chief of police for Everett. “I mean, what else can you say about the work that they do? Their volunteers are unbelievable.” 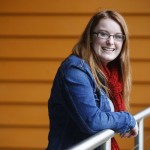 Kayla Dowd, 16, a junior at the International School of Communications at Marysville Getchell High School, is the volunteer public relations organizer for the upcoming Marysville-Tulalip Relay for Life fundraiser for the American Cancer Society. The event will be held the last weekend of June. Photo:
Genna Martin, The Herald

Marysville student is organizing fundraising event for her community

MARYSVILLE — Raising money for the American Cancer Society is a major focus of volunteer efforts in Snohomish County. During May, June and July, there are 10 Relay For Life fundraisers scheduled.

Marysville Getchell High School junior Kayla Dowd is one of the hundreds of people planning the Marysville-Tulalip event and those elsewhere.

Kayla, 16, is the public relations chairwoman for the relay. As a student in the International School of Communications at Marysville Getchell, Kayla hopes to use some of her new-found writing and speaking skills to let people know about the fundraiser.

The Marysville-Tulalip Relay for Life, like all the other relays, is an overnight event during which teams of people take turns walking or running laps around the field. Each team keeps a member on the track at all times. Relay for Life celebrates those who have survived cancer, helps people whose loved ones have died from cancer, raises money for cancer research and encourages people to fight cancer in their own lives, Kayla said.

“I think we can do it,” Kayla said. “Interest is growing each year. I’m involved because I’m one of those people whose life has been touched by cancer.”

A few years ago, Kayla lost her maternal great-grandmother to cervical cancer. Then her grandfather, Pat Dowd, 67, of Smokey Point, was diagnosed with stage-four lung cancer.

“He overcame that, but two months ago we learned that my grandpa has brain cancer. Recently we found out that his tumor has gotten a little smaller,” she said. “So, this has been a journey of ups and downs for my family. Grandpa is so dear to my heart. He is a go-getter and a role model for me. The money we raise at this remarkable event can help keep alive mothers, fathers, grandparents, sisters, brothers and friends.”

Kayla leads her own Relay for Life team of elementary school-age students, who raised $1,200 last year. When not working on fundraising, Kayla spends Tuesdays after school helping at the food bank in Marysville. She hopes to attend Washington State University and would like to study to be a nurse.

Raising awareness about cancer research in the state and Cancer Society services to cancer patients is big part of her job, Kayla said.

And Kayla’s just right for the task, said Kristin Banfield, the chairwoman of the Marysville-Tulalip Relay for Life. In her day job, Banfield is the public information officer for the city of Arlington.

“It’s really exciting to see a young woman, a teenager, stepping up in her community,” Banfield said. “This is a great experience for Kayla and we’re already getting a lot of good work out of her.”

Kayla said she is happy to help with Relay for Life.

“It’s a worthwhile thing, because everywhere you look, there is cancer,” Kayla said.