Seattle officials are reaching out to local Indian tribes as they develop ideas for a planned remake of the Seattle waterfront. 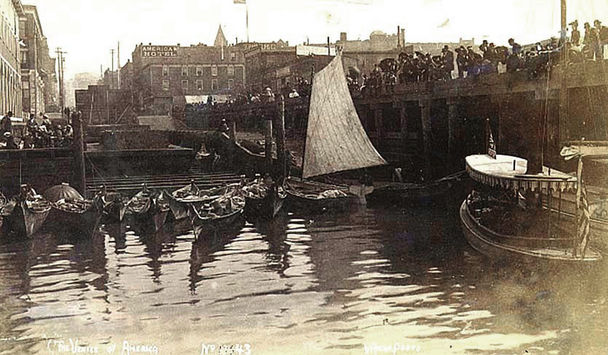 University of Washington Libraries, Special Collections, Negative No. NA897
In this photo from 1891, dugout canoes are moored at a boat launch at the foot of South Washington Street in Seattle. The scene shows the continuing influence of Native American culture on the fast-growing young city, despite the presence of discrimination aimed at local tribes.

Translated from the native Lushootseed language, the downtown Seattle waterfront was known as “Little Crossing Over Place.”

Seattle is named for the Native American chief of the Duwamish and Suquamish tribes who recruited settlers to boost the town’s population and economic viability. His signature on the Point Elliott Treaty ceded the lands that would become the city in exchange for benefits tribal members mostly did not receive.

Now, with the Alaskan Way Viaduct slated for demolition and the city planning for a new waterfront park from Pioneer Square to the Olympic Sculpture Park, city officials have begun reaching out to local Indian tribes to involve them in the design and to incorporate their history and culture into the finished park.

Involving the tribes and finding ways to tell their histories also could go a long way to answering critics who say the early design drawings seem too polished, more like San Diego than Seattle.

“What will make the waterfront authentic? This is one element that’s adding a layer of richness,” Foster said.

Coll Thrush, author of “Native Seattle,” said tribal people were essential to the creation of the city as laborers, housekeepers and traders.

But, he added, one of the first laws adopted when the city incorporated in 1865 made it illegal for natives to live here unless they were employed and housed by a white person.

Despite the presence and contributions of tribal members throughout the city’s development, he said, the history of natives also has included dispossession and discrimination, and the sense by many contemporary Indians that they really aren’t welcomed here.

Seattle-area tribes had extensive involvement in permitting for the new waterfront seawall, currently under construction along Alaskan Way, because their treaty rights give them legal standing to review potential impacts to salmon migration.

But the city hadn’t reached out to the tribes about the new waterfront park plans until Mayor Ed Murray took office in January and created an Office of the Waterfront to coordinate the $1 billion in proposed investments that include the seawall, the currently stalled excavation of the Highway 99 tunnel, the viaduct removal and design of the new park where Alaskan Way now runs.

“We had to encourage them to reach out to us,” said Leonard Forsman, chairman of the Suquamish tribe at the Port Madison Reservation on the Kitsap Peninsula.

And there still isn’t a tribal representative on the 45-member Central Waterfront Committee, the group of civic leaders who have advised the city on its planning and design development over the past two years, though city officials say they plan to rectify that.

Since April, city leaders and lead designers from James Corner Field Operations have met with the Suquamish, Muckleshoot and Stillaguamish tribes and toured Daybreak Star Cultural Center at Discovery Park.

In September, they plan to host a session for interested urban Indians. The Duwamish, who still are seeking federal recognition, have been included.

Forsman said it’s critical that the waterfront design reflect not just the tribes’ past, but their continued presence and strong ongoing connections to the city and Elliott Bay.

“It’s important that we recognize the spiritual connection the tribes have with the places in this landscape even though it’s been heavily urbanized,” Forsman said. “We need to remember that through our casino, our fishing, our geoduck harvesting, our continued work to protect habitat, these places — Puget Sound, Elliott Bay and the Duwamish River — remain important to us.”

Forsman said Suquamish tribal leaders and elders, in their meeting with the city planning and design team at Port Madison, expressed their desire for a culturally appropriate outdoor gathering space, something not exclusively for tribal use, but that could host traditional ceremonies and events such as the annual Salmon Homecoming celebration now held in conjunction with the Seattle Aquarium.

He said the tribes also are interested in ways they can tell their own stories and their history both before and after contact with Europeans.

How those goals might be reflected in the design, he said, is up to the planners.

“We told them our needs. Their job is to come up with the expression.”

Members of the design team said they’re still listening, gathering ideas from the tribes and trying to understand how native people might use the new public spaces that could be developed along the waterfront.

Tatiana Choulika, a lead designer with James Corner, said she was struck, in their visit to the Suquamish, by a large carving of a canoe being carried on the shoulders of six life-size tribal figures, both contemporary and mythic. She said the carving suggested the strong value of teamwork and the flow of tradition from an ancient past to young tribal members today.

In their meeting with the Muckleshoot Tribe, she said, she was impressed by their elder center, health-care clinic and offices for managing hunting, fishing and wildlife resources. She said the Muckleshoot expressed an interest in building a Salish cultural center on the waterfront. The closest thing Seattle has now is the Burke Museum on the University of Washington campus.

Choulika said she also realized that the history of the Seattle waterfront is more than the 160 years since the landing of the Denny party, that it’s always been a port and a gathering place, a multilingual, multicultural mixing spot.

“Once it was all the tribes of the Salish Sea; now it’s people from all over the world. How do we communicate this in the design of the new waterfront?” Choulika asked.

Nicole Willis, the city tribal relations director, organized and attended the outreach sessions with the tribes. She said she was impressed with the design team’s seriousness in learning about native culture.

“It’s really pretty amazing. They’re only out here from New York for a few days every month and they’ve devoted entire days to visiting reservations, hearing stories, hearing from tribal elders, hearing interpretations of tribal structures and how the tribes choose to represent themselves.”

Willis said Seattle is one of the few American cities where native art, images and people are visible. The Seahawks’ logo is based on a Kwakwaka’wakw transformation mask carved on Vancouver Island. Seattle manhole covers feature a Tlingit orca whale. Totem poles stand in Pioneer Square and Steinbrueck Park, though she notes that totems were the art of northern coastal Indians and not traditionally carved around Puget Sound.

But Willis also mentioned the shooting of First Nations carver John T. Williams in 2010 by a Seattle police officer. She said that’s also part of the history of Indians in Seattle, some of whom feel that they aren’t welcomed or wanted.

What she heard in the listening sessions with the tribal members, she said, was how important the Seattle waterfront had been to them. It was a center for trade, a gathering place, a home.

Willis said, “The overarching theme is they want to feel welcomed and comfortable and that they want to have a presence there again. The waterfront can be a project that renews that sense of belonging.”

Information in this article, originally published Aug. 21, 2014, was corrected Aug. 22, 2014. A previous version of this story incorrectly stated that the Seahawks mascot was based on a Kwakwaka’wakw transformation mask. The story should have said the Seahawks logo was based on the mask.
http://tinyurl.com/jwdnt4z