By Mariam Baksh, The Durango Herald 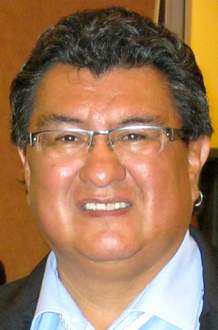 WASHINGTON – Tribal leaders appealed to the federal government for greater control of their assets during a hearing of the Senate Committee on Indian Affairs on Wednesday.

In the 1800s, the federal government agreed to hold Indian lands for 25 years, promising to allot economic benefits of the land to Indians – a trust. The beneficiaries could not sell, lease or otherwise encumber their allotted lands without government approval. This practice is still in effect today, according to a recent Department of Interior report to Congress.

The trust is established in the Constitution and in extensive case law, but it is not codified in any congressional statute. Tribes support legislation by Sen. Michael Crapo, R-Idaho, and Rep. Mike Simpson, R-Idaho, to codify the trust and reform it to give more management control to tribal governments.

The legislation would maintain federal responsibility and oversight for the trust, but seeks to ensure accountability by having Native Americans provide input in management decisions.

Tribal leaders are also calling for the elimination of the Office of the Special Trustee. They say it is superfluous to the Bureau of Indian Affairs, and it causes delays and hurdles for tribal management.

The National Congress of American Indians has issued a resolution expressing the importance of the legislation in streamlining rules to promote economic development.

“We go to the BIA, and they say you have to go to the OST, then they send us back to the BIA,” said Ernest Stensgar, vice chairman of the Coeur d’Alene Tribe of Indians, describing the permitting process for logging projects. “OST is a problem. Our processes can come to a dead stop as we wait to find out who has jurisdiction.”

Kevin Washburn, assistant secretary for Indian Affairs, acknowledged as many as 43 steps are required for permitting development but said merging the positions would be “like rearranging the deck chairs on the Titanic.”

“Frankly, this fiduciary function is very important, having that expertise,” Washburn said. “We’re very cautious about claims that the OST position needs to be reformed.”

The committee also discussed the Supreme Court’s ruling on Carcieri v. Salazar. In 2009, the court ruled that only tribes recognized before 1934 should be included in the trust.

“It’s (Carcieri analysis) has been a horrible burden,” said Washburn, who explained that counties often fear a loss of tax revenue from tribes being accepted into the trust. “If there’s disagreement from the local or state governments, proposals to join the trust can languish for years.”

“State taxation crowds out the ability of tribes to develop their lands,” he said.

“If we really want to get serious about issues like native youth suicides, then we have to allow development and tackling dual taxation.”

These types of uncertainties create land insecurity and end up stifling economic interests for both native and non-native people, said Gregory Smith, an attorney working to defend tribal rights in the Southwest.

Heart said the Ute Mountain Utes have casinos and oil and gas developments, and they are looking to invest in solar energy, as well.