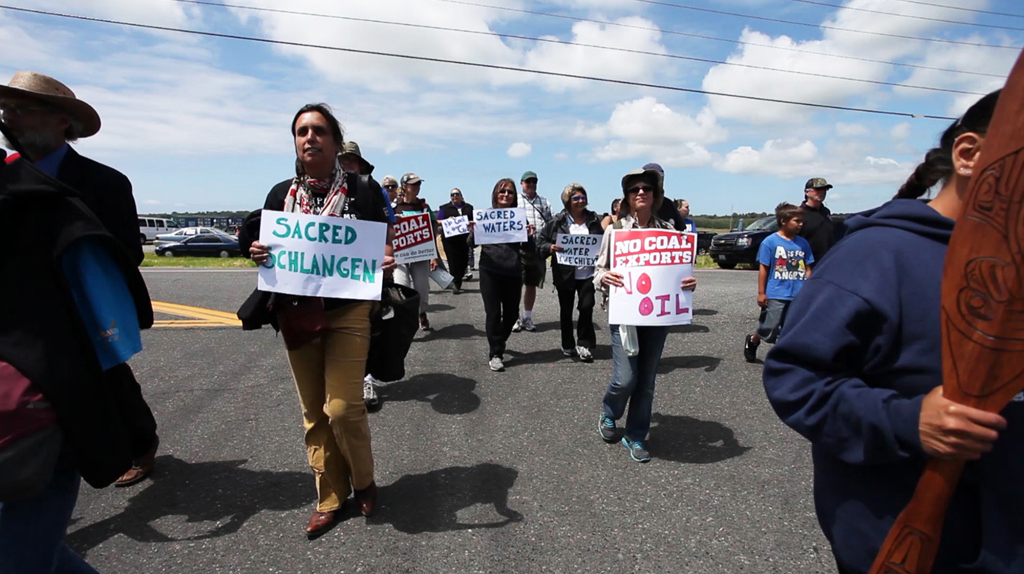 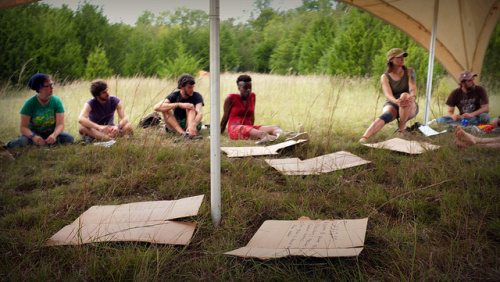 According to documents obtained by Earth Island Journal, investigators from the Bryan County
Sherriff’s Department had been spying on a Great Plains Tar Sands Resistance training camp
that took place from March 18 to March 22 and which brought together local landowners,
Indigenous communities, and environmental groups opposed to the pipeline. Photo: Photos by Laura Borealis/Tar Sand Blockade

After a week of careful planning, environmentalists attending a tar sands resistance action camp in Oklahoma thought they had the element of surprise — but they would soon learn that their moves were being closely watched by law enforcement officials and TransCanada, the very company they were targeting.

On the morning of March 22 activists had planned to block the gates at the company’s strategic oil reserves in Cushing, Oklahoma as part of the larger protest movement against TransCanada’s tar sands pipeline. But when they showed up in the early morning hours and began unloading equipment from their vehicles they were confronted by police officers. Stefan Warner, an organizer with Great Plains Tar Sands Resistance, says some of the vehicles en route to the protest site were pulled over even before they had reached Cushing. He estimates that roughly 50 people would have participated— either risking arrest or providing support. The act of nonviolent civil disobedience, weeks in the planning, was called off.

“For a small sleepy Oklahoma town to be saturated with police officers on a pre-dawn weekday leaves only one reasonable conclusion,” says Ron Seifert, an organizer with an affiliated group called Tar Sands Blockade. “They were there on purpose, expecting something to happen.”

Seifert is exactly right. According to documents obtained by Earth Island Journal, investigators from the Bryan County Sherriff’s Department had been spying on a Great Plains Tar Sands Resistance training camp that took place from March 18 to March 22 and which brought together local landowners, Indigenous communities, and environmental groups opposed to the pipeline.

An excerpt from an official report on the “Undercover Investigation into the GPTSR Training Camp” indicates that at least two law
enforcement officers from the Bryan County Sherriff’s Department infiltrated the training camp and drafted a detailed report about
the upcoming protest, internal strategy, and the character of the protesters themselves.

At least two law enforcement officers infiltrated the training camp and drafted a detailed report about the upcoming protest, internal strategy, and the character of the protesters themselves. The undercover investigator who wrote the report put the tar sands opponents into five different groups: eco-activists (who “truly wanted to live off the grid”); Occupy members; Native American activists (“who blamed all forms of government for the poor state of being that most American Indians are living in”); Anarchists (“many wore upside down American flags”); and locals from Oklahoma (who “had concerns about the pipeline harming the community”).

The undercover agent’s report was obtained by Douglas Parr, an Oklahoma attorney who represented three activists (all lifelong Oklahomans) who were arrested in mid April for blockading a tar sands pipeline construction site. “During the discovery in the Bryan county cases we received material indicating that there had been infiltration of the Great Plains Tar Sands Resistance camp by police agents,” Parr says. At least one of the undercover investigators attended an “action planning” meeting during which everyone was asked to put their cell phones or other electronic devices into a green bucket for security reasons. The investigator goes on to explain that he was able to obtain sensitive information regarding the location of the upcoming Cushing protest, which would mark the culmination of the week of training. “This investigator was able to obtain an approximate location based off a question that he asked to the person in charge of media,” he wrote. He then wryly notes that, “It did not appear…that our phones had been tampered with.”

(The memo also states that organizers at the meeting went to great lengths not to give police any cause to disrupt the gathering. The investigator writes: “We were repeatedly told this was a substance free camp. No drug or alcohol use would be permitted on the premises and always ask permission before touching anyone. Investigators were told that we did not need to give the police any reason to enter the camp.” They were also given a pamphlet that instructed any agent of TransCanada, the FBI, or other law enforcement agency to immediately notify the event organizers.)

The infiltration of the Great Plains Tar Sands Resistance action camp and pre-emption of the Cushing protest is part of a larger pattern of government surveillance of tar sands protesters. According to other documents obtained by Earth Island Journal under an Open Records Act request, Department of Homeland Security staff has been keeping close tabs on pipeline opponents — and routinely sharing that information with TransCanada, and vice versa.

In March TransCanada gave a briefing on corporate security to a Criminal Intelligence Analyst with the Oklahoma Information Fusion Center, the state level branch of Homeland Security. The conversation took place just as the action camp was getting underway. The following day, Diane Hogue, the Center’s Intelligence Analyst, asked TransCanada to review and comment on the agency’s classified situational awareness bulletin. Michael Nagina, Corporate Security Advisor for TransCanada, made two small suggestions and wrote, “With the above changes I am comfortable with the content.”

Then, in an email to TransCanada on March 19 (the second day of the action camp) Hogue seems to refer to the undercover investigation taking place. “Our folks in the area say there are between 120-150 participants,” Hogue wrote in an email to Nagina. (The Oklahoma Information Fusion Center declined to comment for this story.)

It is unclear if the information gathered at the training camp was shared directly with TransCanada. However, the company was given access to the Fusion Center’s situational awareness bulletin just a few days before the Cushing action was scheduled to take place.

In an emailed statement, TransCanada spokesperson Shawn Howard did not directly address the Tar Sands Resistance training camp. Howard described law enforcement as being interested in what the company has done to prepare for activities designed to “slow approval or construction” of the pipeline project. “When we are asked to share what we have learned or are prepared for, we are there to share our experience – not direct law enforcement,” he wrote.

The evidence of heightened cooperation between TransCanada and law enforcement agencies in Oklahoma and Texas comes just over a month after it was revealed that the company had given a PowerPoint presentation on corporate security to the FBI and law enforcement officials in Nebraska. TransCanada also held an “interactive session” with law enforcement in Oklahoma City about the company’s security strategy in early 2012. In their PowerPoint presentation, TransCanada employees suggested that district attorneys should explore “state or federal anti-terrorism laws” in prosecuting activists. They also included profiles of key organizers and a list of activists previously arrested for acts of nonviolent civil disobedience in Texas and Oklahoma. In addition to TransCanada’s presentation, a representative of Nebraska’s Homeland Security Fusion Center briefed attendees on an “intelligence sharing role/plan relevant to the pipeline project.” This is likely related to the Homeland Security Information Sharing Network, which provides public and private sector partners as well as law enforcement access to sensitive information.

The earlier cache of documents, first released to the press by Bold Nebraska, an environmental organization opposed to the pipeline, shows that TransCanada has established close ties with state and federal law enforcement agencies along the proposed pipeline route. For example, in an exchange with FBI agents in South Dakota, TransCanada’s Corporate Security Advisor, Michael Nagina, jokes that, “I can be the cure for insomnia so sure hope you can still attend!” Although they were unable to make the Nebraska meeting, one of the agents responded, “Assuming approval of the pipeline, we would like to get together to discuss a timeline for installation through our territory.”

The new documents also provide an interesting glimpse into the revolving door between state law enforcement agencies and the private sector, especially in areas where fracking and pipeline construction have become big business. One of the individuals providing information to the Texas Department of Homeland Security’s Intelligence and Counterterrorism Division is currently the Security Manager at Anadarko Petroleum, one of the world’s largest independent oil and natural gas exploration and production companies. In 2011, at a natural gas industry stakeholder relations conference, a spokesperson for Anadarko compared the anti-drilling movement to an “insurgency” and suggested that attendees download the US Army/Marine Corps Counterinsurgency Manual.

LC Wilson, the Anadarko Security Manager shown by the documents to be providing information to the Texas Fusion Center, is more than just a friend of law enforcement. From 2009 to 2011 he served as Regional Commander of the Texas Department of Public Safety, which oversees law enforcement statewide. Wilson began his career with the Department of Public Safety in 1979 and was named a Texas Ranger — an elite law enforcement unit — in 1988, eventually working his way up to Assistant Chief. Such connections would be of great value to a corporation like Anadarko, which has invested heavily in security operations.

In an email to Litto Paul Bacas, a Critical Infrastructure Planner (and former intelligence analyst) with Texas Homeland Security, Wilson, using his Anadarko address, writes, “we find no intel specific for Texas. There is active recruitment for directed action to take place in Oklahoma as per article. I will forward any intel we come across on our end, especially if it concerns Texas.” The article he was referring to was written by a member of Occupy Denver calling on all “occupiers and occupy networks” to attend the Great Plains Tar Sands Resistance training camp.

Wilson is not the only former law enforcement official on Anadarko’s security team; Jeffrey Sweetin, the company’s Regional Security Manager, was a special agent with the Drug Enforcement Administration for more than 20 years heading up its Rocky Mountain division. At Anadarko, according to Sweetin’s profile on Linkedin, his responsibilities include “security program development” and “law enforcement liaison.”

Other large oil and gas companies have recruited local law enforcement to fill high-level security positions. In 2010, long-time Bradford County Sheriff Steve Evans resigned to take a position as senior security officer for Chesapeake Energy in Pennsylvania. Evans was one of a handful of gas industry security directors to receive intelligence bulletins compiled by a private security firm and distributed by the Pennsylvania Department of Homeland Security. Bradford County happens to be ground zero for natural gas drilling in the Marcellus Shale, with more active wells than any other county in the state. In addition to Evans, several deputies of the Bradford County Sheriff’s office have worked for Chesapeake — through a private contractor, TriCorps Security — as “off-duty” security personnel. TransCanada has also come to rely on off duty police officers to patrol construction sites and protest camps, raising questions about whose interests the sworn officers are serving.

Of course for corporations like TransCanada and Anadarko having law enforcement on their side (or in their pocket) is more than just a good business move. It gives them access to classified information and valuable intelligence — essential weapons in any counterinsurgency campaign.