Work is set to begin this summer to restore salmon habitat in Illabot Creek, a tributary to the Skagit River.

Once a winding, multi-channeled creek, Illabot was straightened and diked in 1970 when a bridge crossing was constructed on Rockport-Cascade Road. Straightening the creek degraded salmon habitat by creating a steeper gradient, reducing channel area and habitat complexity.

Illabot Creek is a highly productive tributary to the upper Skagit River, supporting chinook, chum, coho and pink salmon, native char and steelhead trout. Much of the watershed already has been protected or restored, but this half-mile reach on the historic alluvial fan remains heavily degraded.

The Skagit River System Cooperative (SRSC), the natural resources extension of the Swinomish and Sauk-Suiattle tribes, plans to restore Illabot Creek to its historic channel by removing dikes downstream of the road and excavating to encourage new channels to develop.

“Not only will the restoration improve channel complexity and instream habitat conditions, but it also will restore connectivity within the floodplain and increase the number and surface area of channels as Illabot Creek migrates over time,” said Devin Smith, senior restoration ecologist with SRSC.

The tribe purchased the 15-acre property, located near the tribe’s reservation, in July 2012 mainly to preserve it for the community, said Noel Higa, the tribe’s economic development director.

“I think there was a real sense that a treasure could be lost if the tribe didn’t do what it could to rescue it,” he said. “Tribal council has been incredibly supportive of the garden restoration effort.”

Acting head gardener Celia Pedersen cleans vines from an arbor. Click on the photo for more of Heronswood.

Heronswood was established in the late 1980s by local horticulturist Dan Hinkley and gained global recognition as a nursery of rare plants collected from around the world. It was purchased by corporate nursery retailer Burpee in 2000 but then shut down by the company in 2006. The property was put to auction in July 2012 and was purchased by the tribe.

The tribe’s goal is to restore the gardens back to their historic internationally-acclaimed level but also to reflect tribal ownership, culture and traditions, said Laurie Mattson, executive director of the Port Gamble S’Klallam Foundation, the non-profit arm of the tribe that is overseeing Heronswood.

“We want to see the tribe get more involved in the development of the gardens too,” said Nancy Heckler, Heronswood general manager. “After all, it’s their garden now.”

There has been discussion about developing traditional and medicinal plant gardens as well as opening the grounds to private events. The tribe has already hosted one event – same-sex marriage ceremonies in February – and will host its first garden open and plant sale on May 18.

The conditions of the gardens are currently being assessed by the tribe and professional gardeners. Volunteers, including tribal citizens and former employees of Heronswood, are weeding, mulching and fixing up 6 acres of garden beds that are filled with native and non-native plants.

“The gardens are in restoration mode, including weeding, cutting back plants that have taken over, determining what plants currently exist and if they are properly associated with the garden’s naming system,” Heckler said. “Heronswood was known for its international collection and everything was catalogued. It’d be a shame to see it go to waste. Plus, there’s enough land to do all sorts of things.” 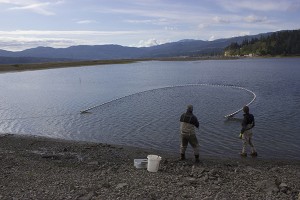 The Jamestown S’Klallam Tribe seined Washington Harbor to develop a baseline of fish populations in the harbor. The harbor’s roadway and two culverts will be replaced by a bridge later this summer. More photos can be found at NWIFC’s Flickr page by clicking on the photo.

The Jamestown S’Klallam Tribe is restoring salmon habitat in the 118-acre Washington Harbor by replacing a roadway and two culverts with a 600-foot-long bridge.

The 600-foot-long road and the two 6-foot-wide culverts restrict tidal flow to a 37-acre estuary within the harbor adjacent to Sequim Bay, blocking fish access and harming salmon habitat.

The Jamestown S’Klallam Tribe seined Washington Harbor to develop a baseline of fish populations in the harbor. The harbor’s roadway and two culverts will be replaced by a bridge later this summer. More photos can be found at NWIFC’s Flickr page by clicking on the photo.

The tribe seined the harbor in April to take stock of current fish populations before construction begins this summer. Chum and chinook and pink salmon, as well as coastal cutthroat, all use the estuary. Young salmon come from a number of streams, including nearby Jimmycomelately Creek at the head of Sequim Bay.

Historically, the area had quality tidal marsh and eelgrass habitat until the roadway and culverts were installed about 50 years ago, said Randy Johnson, Jamestown S’Klallam Tribe habitat program manager.

“The roadway and culverts appear to have severely degraded this habitat, with evidence showing that the estuary marsh has been deprived of sediment and is eroding,” he said. “The structures restrict access for fish and for high quality habitat to develop.”