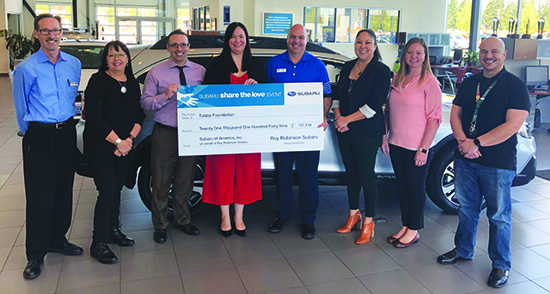 For the past ten holiday seasons, Subaru dealerships across America collectively raised over $140 million dollars during their annual Share the Love campaign. The event is held during the months of November and December in which the company pledges to donate $250 for each new Subaru sold or leased to a charity selected by the dealership.

Previously, the dealership’s choices were between the National Park Foundation, the American Society for the Prevention of Cruelty to Animals (ASPCA), Meals on Wheels and the Make-A-Wish Foundation; resulting in the protection of over 100 National Parks, the rescue of over 50,000 animals, the preparation of over 2 million meals for seniors nationwide and over 1,800 wishes granted to youth battling life threating illnesses. In 2013, Subaru added a fifth option, affording their dealerships the opportunity to donate to a local charity or non-profit of their choice. After much consideration, the friendly crew at Marysville Roy Robinson Subaru decided to donate their 2018 Share the Love earnings to the Tulalip Foundation.

The Tulalip Foundation is a non-profit organization that is dedicated to empowering the wellbeing of the Tulalip reservation and its surrounding communities. Since 2007, the Foundation has worked with a number of programs to create a brighter future for the Tribe, programs that are based on three important values to many tribal families: culture, education and justice.

Originally, the Foundation began as a way to raise the last remaining million dollars needed to open the Hibulb Cultural Center. Since the museum’s opening, the non-profit has raised money, accepted donations and applied for a number of grants to provide several programs and departments with the funds for events, incentives and services including the Betty J. Taylor Early Learning Academy Parent Committee, Tulalip Office of Civil Legal Aid (TOCLA), Tulalip TERO Vocational Training Center and the Tulalip Veteran’s Quilt Project. The Foundation also hosts a number of fundraisers throughout the year such as the Hibulb Cultural Center Salmon Bake and their annual Giving Tuesday event.

Last November, Roy Robinson Subaru General Manager Robb McCalmon stated his crew would be hard at work during the holiday season in hopes of delivering a ‘big check’ to the Foundation come springtime. On the morning of April 15, Robb and his team did just that by presenting an oversized check to the Tulalip Foundation Board of Trustees – a grand total of $21, 149.

The Share the Love event helped improve an already strong relationship between the local Subaru dealership and the Tribe, as well as spread the message about the good work the Tulalip Foundation is doing for the community. Over the next few months, the Foundation will convene and discuss which programs to distribute the donation to, ensuring the efforts made by the Roy Robinson crew are well spent.

“The Tulalip Foundation was extremely honored to be chosen as Roy Robinson Subaru’s community partner for their 2018 Share the Love event,” expresses Tulalip Foundation Executive Director, Nicole Sieminski. “It was a unique opportunity to share our work with the greater community and their generous donation will do a lot of good work in the Tulalip community.”