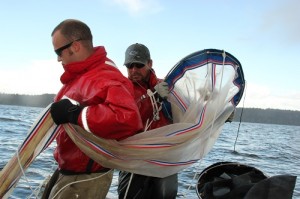 Treaty Indian tribes have invested millions of dollars in hatchery programs and habitat restoration, but poor marine survival continues to stand in the way of salmon recovery.

Marine survival rates for many stocks of chinook, coho and steelhead that migrate through the Salish Sea are less than one-tenth of what they were 30 years ago.

“We have a solid understanding of the factors that affect salmon survival in fresh water,” said Terry Williams, commissioner of fisheries and natural resources for the Tulalip Tribes. “To improve ocean survival, we need a more complete understanding of the effects of the marine environment on salmon and steelhead.”

The Tulalip, Lummi, Nisqually and Port Gamble S’Klallam tribes are among the partners in the Salish Sea Marine Survival Project, which also brings together state and federal agencies from the United States and Canada, educational institutions and salmon recovery groups. The Salish Sea is the name designated to the network of waterways between the southwestern tip of British Columbia and northwest Washington. It includes the Strait of Juan de Fuca, Strait of Georgia, the waters around the San Juan and Gulf islands, as well as Puget Sound.

Led by the non-profit Long Live the Kings and the Pacific Salmon Foundation, the project is coordinating and standardizing data collection to improve the sharing of information and help managers better understand the relationship between salmon and the marine environment.

The project is entering a five-year period of intensive research, after which the results will be converted into conclusions and management actions.

“A new collaborative approach is being taken,” Williams said. “The question is, what do we do with the information we have and how do we make predictions?”

For more information, visit the Long Live the Kings website.

Millions of dollars have been spent to restore fish habitat in Western Washington.

“While all that has been going on, we’ve seen a precipitous decline in the survival rate of both hatchery fish as well as wild fish,” said Phil Anderson, director of the state Department of Fish and Wildlife.

That’s why the department, along with the Tulalip Tribes and 25 other organizations, are beginning a five-year study to determine why some species of salmon and trout are having trouble surviving their saltwater voyages.

The Salish Sea Marine Survival Project, as it’s called, is an international effort. Canadian groups are agreeing to pay half of the estimated, eventual $20 million cost of the study.

The decline has been seen in fish runs both in Washington and British Columbia.

The marine survival rate for many stocks of Chinook and coho salmon, along with steelhead, has dropped more than 90 percent over the past 30 years, according to Long Live the Kings, a Seattle-based non-profit group formed around fish preservation.

Numbers for sockeye, chum, and pink salmon have varied widely over the same time period.

For some reason, many of these anadromous fish — those that spawn in fresh water and spend most of their lives at sea — are not doing well in saltwater, particularly in the inland waters of Western Washington.

The Snohomish and Skagit river systems have been hit particularly hard, Crewson said.

While there’s a solid understanding of the factors affecting salmon survival in fresh water, according to Long Live the Kings, the issues in the marine environment are more complex.

From what is known so far, the survival problem has been traced to a combination of factors. Pollution, climate change, loss of habitat and increased consumption of salmon by seals and sea lions are all playing a part, Tulalip tribal officials have said.

Tribes and government agencies have been collecting information on their own, but it hasn’t yet been put together into context, Crewson said.

That will be one benefit of the new study — synthesizing the work done so far, he said. More research will be done as well.

The Tulalips, for example, have two smolt traps they use to catch young fish to track their progress and survival rates. The tribe already spends about $500,000 per year on fish survival programs and will increase their sampling efforts as part of this study, Crewson said.

Other studies more focused on certain areas, such as a joint effort between the Tulalips and the Nisqually tribe focusing on the Snohomish and Nisqually river systems, will be folded into the larger effort, Crewson said.

“The survival’s especially poor in Puget Sound (as opposed to the open ocean),” he said. “We’re trying to figure out what’s different in Puget Sound.”

The state recently appropriated nearly $800,000 toward the new study. The Pacific Salmon Foundation, a Canadian group, has raised $750,000 to support project activities north of the border. That group is serving as the organizer for efforts there, as is Long Live the Kings on the American side.

The Pacific Salmon Commission, a joint Canadian-American organization formed to implement treaty agreements, is putting in $175,000.

The rest of the money will be raised as the study progresses, officials said. A report and action plan is expected after five years.