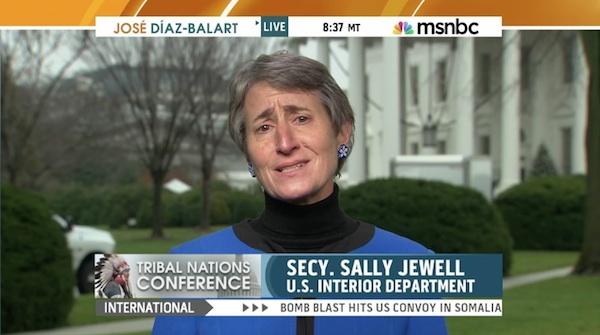 Read more at http://indiancountrytodaymedianetwork.com/2014/12/04/they-know-their-lands-better-we-do-sally-jewell-keystone-xl-opposition-158132
BY RYAN ABBOTT,  Courthouse News Service
WASHINGTON – The U.S. government turned its back on the descendants of freed slaves of Native Americans, swindling them out of lucrative land royalties allotted to them as children, a class action claims in federal court.
Leatrice Tanner-Brown and the Harvest Institute Freedman Federation sued Secretary of the Interior Sally Jewel and Assistant Secretary of Indian Affairs Kevin Washburn, seeking an accounting of revenue from leases on land promised to children of Freedmen, who were liberated by citizens of the so-called “Five Civilized Indian Tribes” or Cherokee, Choctaw, Creek, Chickasaw and Seminole nations.
According to the complaint: “The Five Civilized Tribes allied themselves with the Confederacy during the Civil War and attempted to maintain slaves following the War. As a result of the Tribes’ disloyalty to the United States during the Civil War all territory owned by the Tribes was forfeited. The status of the Tribes was reestablished under treaties entered in 1866.”
Some of the forfeited land was allotted to the freed slaves and their descendants.
The Department of Interior in 1908 agreed to keep track of revenue from leases on land granted to Freedmen minors or their descendants.
“Notwithstanding demand from plaintiffs for an accounting of revenue from leases on restricted lands during the period that these lands were held by Freedmen minors and not subject to alienation, defendants have failed to provide the requested accounting,” the complaint states.
“Under the Act of May 27, 1908, restrictions against alienation of Freedmen allotments … were not removed. Accordingly, any royalties derived from leases on [Freedmen] allotments should have been accounted for by the Department of Interior under the terms of the Sections 2 and 6 of the 1908 Act,” according to the complaint. “These failures were not innocent. They were the result of a deliberate strategy to swindle land and money from Freedmen.”
The claims says many of these allotments were for oil-rich land, and the government allowed grafters and speculators “anxious to obtain oil-rich lands for little or no payment to allottees” to exploit the often unsophisticated and uneducated Freedmen.
According to the complaint, there were 23,405 Freedmen in 1914.
“Defendants breached their duty to avoid conflicts of interests and to monitor Freedmen allotments in favor of alienation of European settlers, Oklahoma statehood, and corporate interests,” the class claims.
They want an accounting of money collected from the allotted lands and declaration of the government’s fiduciary duties.
They are represented by Paul Robinson Jr. of Memphis, Tenn.