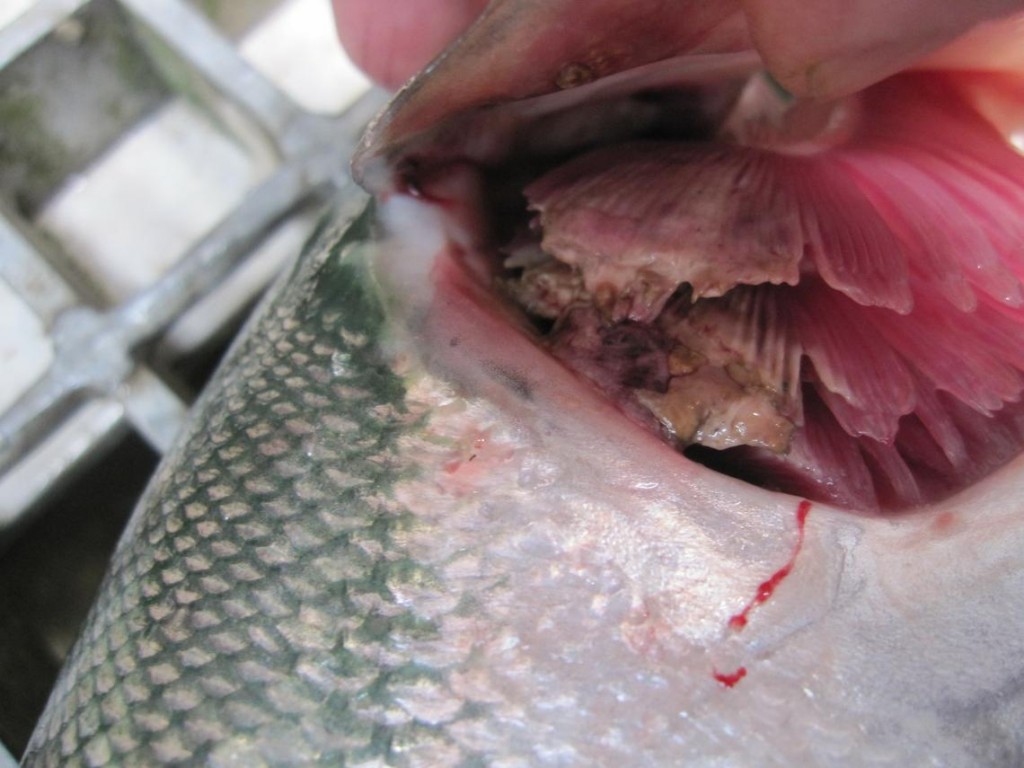 Columnaris lesions mar the gills of a sockeye salmon that was moving up the Columbia River in July 2015.

By Rich Landers, The Spokesman-Review

FISHING — “Catastrophic” is a word that’s being used as scientists begin to unravel the mystery of why at least 200,000 sockeye that moved over Bonneville Dam have not made it to McNary Dam fish ladders in this summer’s huge salmon runs.

The sockeye woes may explain why dozens if not hundreds of 5- to 12-foot-long decades old sturgeon stuffed with sockeye are going belly up in the Columbia between the Tri-Cities and The Dalles.

The Columbia system is plagued with high temperatures and low flows. This is bad news for native fish that need cool water.

Fish managers have enacted fishing restrictions in some areas, but otherwise there isn’t a lot they can do about Mother Nature.

The photos above are of sockeye sampled last week at Bonneville Dam by state and federal scientists.  The first dead sockeyes were noticed at the dam around June 8. This week, the fish scientists were finding dead fish, both shad and sockeye, in the Bonneville Dam fish ladder.

At the Little White Salmon National Fish Hatchery, sockeye in rough shape were hanging out near the facility.

But the words scientists use to describe what’s going on are freakier than the photos.

A Washington Department of Fish and Wildlife biologist said this in an email to colleagues:

We have very bad news from the lower Columbia.  These pictures are just a little piece of the story.  The run is stalled, and the carnage is ugly, with conversion rates from Bonneville to Ice Harbor (for Snake River fish) 2-5%.  Temperatures in the John Day reservoir approach 24 degrees, so nothing’s getting through without suffering.  Looks like we’re going to lose the last 1/3rd to ½ of the run.

Fish that have passed the Snake are still moving upstream, but can’t get to into the tributaries.  The fish that have entered the Wenatchee aren’t passing Tumwater Dam to continue on to Lake Wenatchee, and there’s no cold-water refugia below the dam unless they retreat downstream about 15 km to Peshastin Creek, which is a great steelhead stream but has no holding water for thousands of sockeye.  Besides that, the flows are about half normal discharge, the snow’s all melted out of the cold-water source for Peshastin Creek, and they’re diverting water for irrigation, so it’s bound to heat up.  For fish that passed Tumwater early, many have piled into a small tributary called Chiwaukum Creek, but it’s about the same size as Peshastin.

The Okanagan fish can’t leave Wells with the US Okanogan at 28 degrees C, and the reservoir is nearly 18 degrees C already.  The rate of diseased and injured fish observed in the count windows at Wells seems to increase every day—lots of lamprey scars and descale, and we’re starting to see fungus and bacterial lesions.  I don’t think the estuary provides hospitable holding, with lamprey and pinnipeds; so, I’m not sure we can count on a fall resurgence of migrants.

A British Columbia scientist commenting on this email thread among scientists wrote this:

Catastrophic losses of this year’s exceptional returns of adult Sockeye Salmon have begun to occur in the Columbia River given the unprecedented severity of super-optimal temperatures and low flows encountered along their freshwater migration corridor…. It’s probably fair to surmise that we may lose the majority of the nearly 350,000 wild adult Sockeye destined for Canadian portions of the Okanagan if Wells Pool, where they are currently holding, warms to temperatures much greater than 18 degrees Celsius for an appreciable length of time. Regrettably, this is highly likely to occur as temperatures are currently at 17.5 degrees and increasing while the Okanagan River is well in excess of the upper thermal lethal temperature of 25 degrees.

As noted in an earlier bulletin, we are also maintaining a Somass Salmon and Climate Watch given poor environmental conditions for either migration in the Somass River or for holding at the head end of Alberni Inlet. Although some fish managed to access their lakes of origin at Great Central and Sproat in the past few days, conditions are still marginal for passage and stored water released from behind the Great Central Lake Dam to supplement flows to ease passage under high temperature conditions has now been exhausted just as we head into what is on average the driest weeks of the summer-fall interval.

It may be advisable for DFO communications to identify “talking points” and “spokespersons” very soon to get out in front of events that will likely generate intense media interest. I’ve worked on BC salmon populations for more than 40 years and cannot remember anything comparable to what were currently seeing unfold on the coast ! 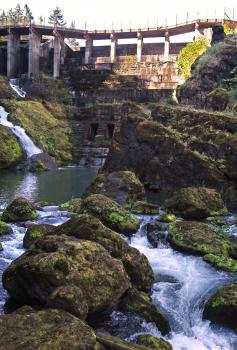 Elwha: A River Reborn, a new exhibit from the Burke Museum, takes you into the Northwest’s legendary Elwha River Valley to discover the people, places, and history behind the world’s largest dam removal project, an unprecedented bet on the power of nature. Once legendary for its pre-dam wild salmon runs and Chinook weighing as much as 100 pounds, today the Elwha is being dramatically rethought as its two massive dams are torn down. With the start of the first dam blasts in September 2011 comes a chance for unprecedented environmental restoration and community renewal.

Based on the book by Seattle Times reporter Lynda Mapes and photographer Steve Ringman, Elwha: A River Reborn exhibit sheds light on this essential part of Washington State’s history through compelling stories, stunning photographs, and Burke collections, from fish to cultural objects from the Elwha region.