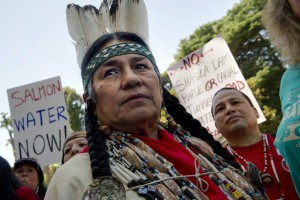 Chief Caleen Sisk will speak at rallies in Sacramento today and Friday and re-affirm the Winnemem Wintu opposition’s against the construction of the peripheral water export tunnels and the Bay Delta Conservation Plan (BDCP), as Governor Jerry Brown’s administration releases the preliminary Environmental Impact Report and the BDCP plan to the public today.

As California’s State Water Project currently operates, far too much water is sucked from the San Francisco/Sacramento Delta, the largest estuary on the Pacific Coast, and sent to the state’s water brokers, who support unsustainable industrial agriculture, destructive hydraulic fracking for oil extraction and municipal developments in the desert.

The proposed peripheral tunnels, with a conservatively estimated price tag of $54 billion, will undoubtedly kill the sensitive Delta, a delicate mix of salt and freshwater, that is vital to the life cycle of California salmon as well as thousands of other fish and species.

“There is no precedent for the killing of an estuary of this size, so how could any study be trusted to protect the Delta for salmon and other fish? How can they even know what the effects will be?” said Chief and Spiritual Leader Caleen Sisk.  “The end of salmon would also mean the end of Winnemem, so the BDCP is a threat to our very existence as indigenous people.”

As one of the many traditional salmon tribes in California, the Winnemem rely on access to salmon to maintain our cultural and religious practices. The peripheral tunnels if ever constructed would therefore be in violation of our indigenous rights to maintain our cultural practices with salmon, as outlined in the United Nations Declaration on the Rights of Indigenous Peoples.

Recently at a public meeting in Redding, Governor Brown’s  Deputy Director of the Natural Resources Agency Jerry Meral, disclosed that the peripheral tunnels are connected to the U.S. Bureau of Reclamation’s plan to raise Shasta Dam by 18.5 feet, a project that would destroy or submerge nearly 40 sacred sites and destroy potential salmon spawning areas. We are currently working on plans to re-introduce our salmon above the dam into the McCloud River.

The planned Delta tunnels will  require more water be taken from the Trinity River and the Shasta Dam, which is fed by the Upper Sacramento, McCloud and Pit Rivers. This will add even more stress to the struggling ecology of these rivers.

This plan is not meant to benefit the public of California, native and non-native, but purely to line the coffers of the lobbyists who have been buying off Gov. Brown all along, such as Beverly Hills Big Ag billionaire Stewart Resnick and his wife Lynda who contributed $99,000 to his 2010 campaign. The Western States Petroleum Association has spent more than $4.5 million in lobbying the state government in 2013 alone.

The peripheral tunnels are a violation of the public’s trust in Gov. Brown, and not the answer to dealing with the state’s forthcoming water shortages. There are better solutions.

The Winnemem are proud to announce that we will be standing with our allies during a press conference today and a rally Friday, Dec. 13 at the West Steps of the Capitol. Chief Sisk will speak.

These events are sponsored by Californians for A Fair Water Policy and dozens of other environmental, fishing, farming, government, and water agencies.

—Press Conference and Rally at the Capitol

—Location: Starting in Room 112, moving to West Steps if needed

—Location: West Steps of the Capitol

This rally is sponsored by Californians for A Fair Water Policy and dozens of other environmental, fishing, farming, government, and water agencies.

To stop this boondoggle please writ letters to Governor Brown expressing your opposition to the peripheral tunnels plan! Letters should be addressed to:

SAN FRANCISCO – American Indians and other Indigenous Peoples from the San Francisco Bay Area marched from Washington Square one-quarter mile to near Coit Tower where a statue of Christopher Columbus stands in San Francisco. This after being denied access to Alcatraz Island for the first time in decades.

Owned and operated by the National Park Service, Alcatraz Island is the victim of federal government shutdown, along with other national parks throughout the United States.

On the day others celebrate Christopher Columbus, the San Francisco Bay Area Native community has held Indigenous Peoples Day celebration on Alcatraz Island as an alternative means to draw attention to Indigenous causes.

Yesterday, the protesters marched to the statue to demand that a process begins to have the statute permanently removed.

”Honoring Columbus with a statute is equal to erecting a statue of Hitler in Europe where he left so many victims,”

according to a statement released by AIM-West, one of the organizations that held yesterday’s event.

”Let the healing begin …and celebrate 521 years of Indigenous People’s resistance to colonization throughout the Americas! October 12, also known as Dia De La Raza for millions of Spanish speaking Indigenous people’s of Central and South America, sacred Turtle Island, Abya Yala, declare this day together by shouting, ‘We are still here!’”

reads another portion of AIM-West’s statement.

“It was determined that a process will be initiated to bring to the attention of San Francisco Board of Supervisors to find a resolution that will effectively remove sculptures and symbols that represent and glorify individuals at the expense of indigenous lives and culture,” said Tony Gonzales, director of AIM-West.