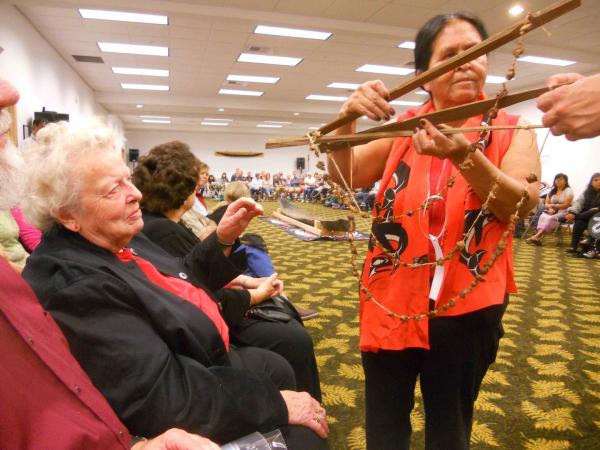 Richard Walker
Samish Nation cultural director Rosie Cayou James presents a string of smoked clams strung on sinew to Mary Jean Cahail, president of the San Juan Historical Society, June 28. The Old One can be seen in the background.

Ownership of a Samish canoe, believed to date from pre-contact, has been formally transferred to the Samish Indian Nation from the San Juan Island Historical Society & Museum in Friday Harbor, Washington.

Samish has cared for the canoe since 2011, when the historical society began construction of a new exhibit space. As the exhibit space neared completion, Samish requested that the canoe, which is in fragile condition, be repatriated in exchange for new cultural items that the museum can more easily care for and use to teach the history of the island’s Indigenous Peoples. The museum board approved the proposal and the transfer took place June 28. Among those present were people from Nooksack, Saanich, Swinomish, as well as Samish.

In a ceremony at Samish’s Fidalgo Bay Resort in Anacortes, Washington, Samish Chairman Tom Wooten and museum board president Mary Jean Cahail signed a memorandum of agreement. The canoe, which rests on a cradle made by Samish artist David Blackinton, was carried in by eight men while Samish singers offered a paddle song. The canoe was carried once around the gathering hall, then placed in the middle of the room on blankets that had been laid out earlier. Witnesses were called. A name was bestowed on the canoe: S7alexw, which means “The Old One.”

The Old One will rest on its cradle in the gathering hall, suspended from the ceiling by cedar cordage being made by Samish general manager Leslie Eastwood.

Among the items presented to the museum: a hand drum, made by Blackinton; twined yellow cedar, made by Eastwood; a cedar hat, made by 15-year-old Samish Nation citizen Madisen Cork; smoked clams strung on sinew, by Samish cultural director Rosie Cayou James; a video on Samish history; and CDs of Samish music and oral histories.

Wooten told ICTMN that the canoe’s repatriation is mutually beneficial: “The canoe belongs here [at Samish],” he said. “And we’re able to share part of our culture [with the museum]. It’s a win-win.” He said the agreement with the San Juan Historical Society “sets the tone” for future repatriation work. Samish is working on the repatriation of cultural property from the Paul H. Karshner Memorial Museum in Puyallup. In 2005, a 150-year-old house post from the last Samish longhouse on Guemes Island was returned to Samish from the Burke Museum at the University of Washington. It now stands in the entrance to the gathering hall, not far from the Old One.

The island’s First Peoples will be included in the museum’s permanent exhibit on island industries, among them fishing. Museum board member Don Nixon said materials and technology used in fishing during the settlement and post-settlement period of 1850 to 1950 became more sophisticated, “but all the techniques were there already,” having been used for centuries by the island’s First Peoples.

“We were taught not to expect to be rich, but to be happy with who we are,” said John Cayou, Swinomish. “It’s important to show the ancestors how much you cherish what’s been left.”

George Adams, Nooksack, said of the Old One, “I’m glad it has reached home to inspire the people here. And I’m glad for the foresight of the museum, for knowing this canoe comes from the heritage of our ancestors.”